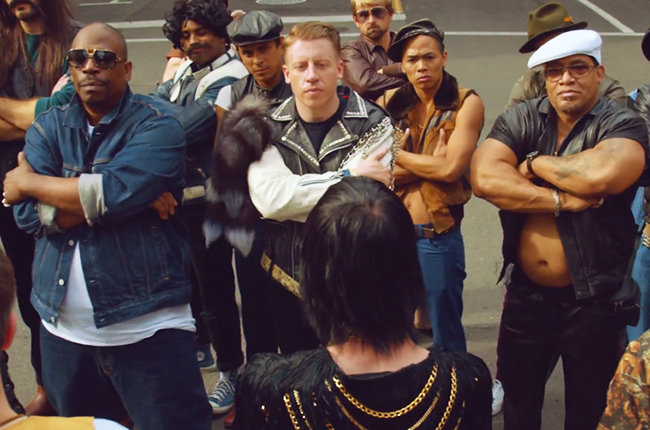 Macklemore and Ryan Lewis are back with an epic video that includes a nod to hip-hop and Seattle Mariner yesteryear. The Seattle hip-hop duo takes it to the streets. Macklemore, with his army of backup dancers wow us with some tasty Michael Jacksonesque choreography and crotch-grabbing, with b-boy/hip-hop innovators and legends, Grandmaster Caz, Kool Moe Dee and Melle Mel, in an over-the-top and bigger-than-life video, “Downtown.”  The video throws in just about everything but the kitchen sink here. The song and video not only give a nod to classic hip-hop, but classic arena rock. And mopeds (or scooters for the anal retentive)? Well, they never seemed so cool. “You don’t need an Uber, you don’t need a cab, f—k a bus pass, you gotta moped man!” Yup, we may just have to get ourselves one.

Foxy Shazam vocalist and Freddie Mercury channeler, Eric Nally shows up out of nowhere, halfway through the video riding his golden eagle chariot, pulled by no less than four motorcycles through the mean streets of beautiful  downtown Spokane – delivering the big chorus in his own theatrical/arena-rock style. Nally provides some slick moves of his own as he and Macklemore meet at the crossroads in the center of town for a fight – or dance off (another nod to a classic – The “King of Pop’s” video “Thriller”).  As if that is not enough, a beloved Seattle icon and future MLB Hall of Famer, “The Kid” Ken Griffey Junior makes a couple of cameo appearances in the video as well. My, oh my!

The video culminates with what seems to be the entire town of Spokane hitting the streets and taking it to the center of the city for a rousing and life affirming parade/celebration and chorus, providing a fitting conclusion to the opus that is “Downtown.” Macklemore and Lewis are definitely back with a video that encapsulates their eclectic blend of rap, hip-hop, soul, rock, creativity and self-effacing humor with tongues firmly planted in cheeks – laughing all the way to the bank in “Downtown.” Spokane.

Macklemore and Lewis will perform the new single, “Downtown,” live this Sunday, August 30, on MTV’s Video Awards. Their newest joint has to be an early favorite to win “Video of the Year” in 2016.

Not only is he a multi-media journalist, he is also an accomplished musician. He is the founder of SMI and drives the creative look, feel and branding for the publication. His years of writing, arranging, and performing live music in a variety of genres inform his ability to communicate the message and the mechanics of music. Roth’s work on SMI reflects his philosophy that music is the universal language, and builds community. He believes it has the power to unite people of every race, religion, gender, and persuasion.
Related ItemsEric NallyFeatureFoxy ShazamGrandmaster KazKen Griffey JuniorKool Moe DeeMacklemore and Ryan LewisMelle MelMichael JacksonMTV Video AwardsSeattle MarinersVideo
← Previous Story Modest Mouse at The Paramount: TWO NIGHTS!
Next Story → SMI Photo Exhibit kicks off Thursday at Triple Door (Video)