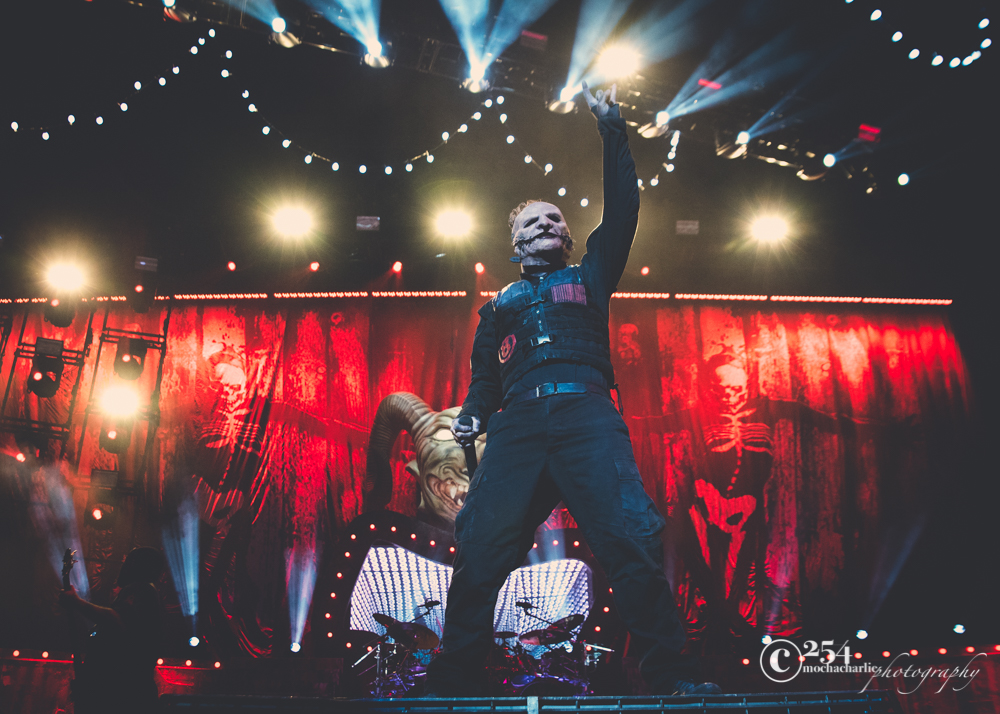 Fans flocked to this year’s KISW-Pain In The Grass festival at Auburn’s White River Amphitheater, and with Slipknot as its headliner, majority of them stayed until the very end. Seattle guitar wizard, Ayron Jones celebrated his birthday with an opening slot at the festival as the first of thirteen bands to play.

There were two stages for the event, including the main stage under the amphitheater. The lines for beer, food, and merchandise were long throughout the day, and the crowds were entertained by music, the occasional scantily clad fan, and the totally normal fans who came dressed in banana suits. As for the music, it was exceptionally rockin’. The line-up, which was announced in stages months ago, was quite appealing for fans as all 16,000+ tickets (including all of the higher priced VIP experience) sold out.

The smaller (Another Century) stage not only gave fans an opportunity to see and hear the bands play in a closer proximity to a stage, they also offered up meet & greet opportunities to those willing to stand in line near a tent adjacent to the stage. The newly formed, local band Varsity Week played the first set followed by Auckland New Zealand’s  Like A Storm. They began their performance with lead singer Chris Brooks busting out a didgeridoo solo before playing music off their newest CD release Awaken The Fire. They also had the longest meet & greet line after their set.

Hollywood-based band Stitched Up Heart (who will be heading out on a full US tour next month promoting their upcoming full length EP), provided plenty of hair flips during their set. Seattle alternative rock band Awaken The Empire took a slot on the stage, as a newly signed Another Century artist. Their debut CD, Aurora, was just released last month. New Years Day gave fans a highly energetic performance, as if they hadn’t performed here in ages, (even though they were just here a few weeks back as a part of the Vans Warped Tour line-up.)

As for main stage performers, this year’s bands gave the crowds reason to shout, sing, mosh, and scream. Crobot entertained with their groove-rock performance,  while Pennslvania’s Motionless In White‘s set was filled with metalcore rock, and theatrical costuming. Bassist, Devin “Ghost” Sola, kept the crowd mesmerized by not only his back-up vocal strength, but also his make-up and costume. Canadian rock band, Theory Of A Deadman opted out of playing any of their “acoustic” style songs from their latest EP, Angel, and continued to fill the crowd with rock from their collection of previous works. Welsh metal band Bullet For My Valentine premiered a few of their newest songs off of their CD, Venom, sans long time bassist Jay James, who left the band in February. His replacement, Jamie Mathias provided stellar back-up vocals and seemed to fit in with the band seamlessly.  Three Days Grace performed with new lead singer Matt Walst (younger brother of the band’s bassist Brad Walst). Founding member and lead singer, Adam Gontier left the band for health reasons in 2013. Walst appears as lead vocalist on the band’s latest CD,  Human.

After a brief hiatus in 2014, (stemming from depleted band funds used to pay for legal fees in lead singer Randy Blyth‘s court case), Lamb Of God returned to the studio earlier this year and released their seventh studio album, VII: Sturm Und Drang, in July. They have been supporting Slipknot on tour this summer.

After LOG’s set, the front of the main stage was draped in a red velvet curtain and the loud speakers played Van Halen’s “Running With The Devil.” It finally dropped to a rousing applause and a shroud of screams revealing Slipknot‘s immense stage set up for what would be the night’s long-awaited main event. Center stage was an elevated drum kit which sat under a large glowing devil with horns. On either side of the stage toward the front, stood metal drum sets that would be elevated and rotated as their set began. Fire flame bursts were strategically set off throughout, as multi-tiered lights illuminated both the performers on stage and the audience. Crowd surfing (including a fan in a wheelchair), mosh pit reveling, fists waving, and shouting lyrics were seen and heard throughout the venue. On many occasions, lead singer Corey Taylor thanked the crowd for supporting the band for more than twenty years by taking the time to support the band through their ups and downs. The amphitheater was still near max capacity as their set came to a close after a lengthy encore, and ended with Taylor saying, “Take care of yourselves. Take care of each other,” as the mass exodus began.

Mocha Charlie is an amazing photographer who has a real passion for music. She covers and shoots several shows per month in and around the region. She a brilliant photo journalist but most importantly, she is also a mother who does her best to balance out her life and live it to the fullest. Mocha Charlie uses her passion and talent to support the community, her friends and family any way that she can.
Related ItemsAwaken The EmpireBullet For My ValentinecrobotFeatureKISWLamb of GodLink A StormMocha CharlieMotionless In WhiteNew Years DayPain In The GrassSlipknotStitched Up HeartTheory of a DeadmanThree Days GraceVarsity WeekWhite River Amphitheater
← Previous Story Bang-A-Rang . . . Lions Ambition roars at Neptune
Next Story → Modest Mouse kicks off two nights at the Paramount