By Christine Mitchell on August 31, 2015@Housetornado37 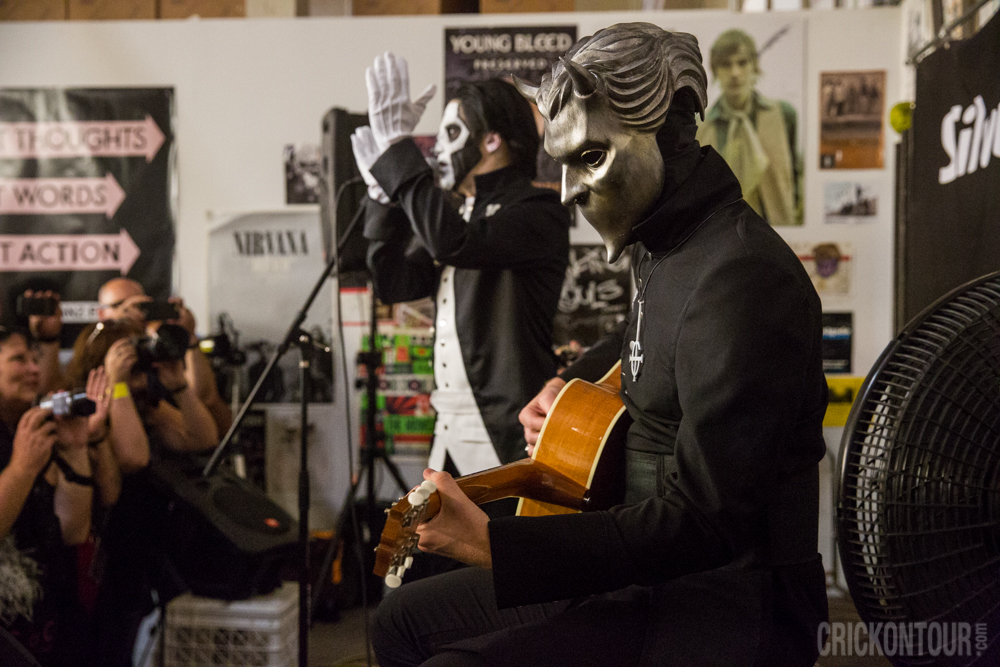 Swedish death metal band Ghost graced Silver Platters with its stripped-down acoustic Unholy/Unplugged tour of record stores across the US. Seattle’s date was the first on a short list of five cities on this tour, which includes Hollywood, Phoenix, Baltimore, and Brooklyn.

Only two Nameless Ghouls accompanied lead vocalist Papa Emeritus III, and Papa was without his signature mitre hat, instead sporting slicked back black hair along with the usual skull painted face. The Nameless Ghouls, however, still wore their metal horned masks as they played acoustic guitars. SMI contributing photographer Alex Crick was on hand to capture the macabre, if short, performance.

If you missed this intimate show, never fear: Ghost will return in full regalia at El Corazon on October 20. With Halloween just around the corner, this might be a good warmup.

Christine Mitchell has been poring over album liner notes pretty much since she acquired the skill of reading, and figured out the basic structure of rock songs at an early age. Whether it’s the needle popping into the first groove of the record, the beeps that signal the beginning (or end) of a cassette tape, or digital numbers ticking off the seconds from zero, music brings Christine happiness, ponderous thought, opportunities for almost scientific study, and sometimes a few tears. When she started attending live shows two decades ago, a whole new piece of the puzzle clicked in and she has been hooked ever since.
Related ItemsAlex CrickChristine MitchellFeatureGhostSilver Platters
← Previous Story Modest Mouse kicks off two nights at the Paramount
Next Story → Dave Matthews Band Celebrates 50th Show at The Gorge