By Robin Fairbanks on September 15, 2015@robinfairbanks 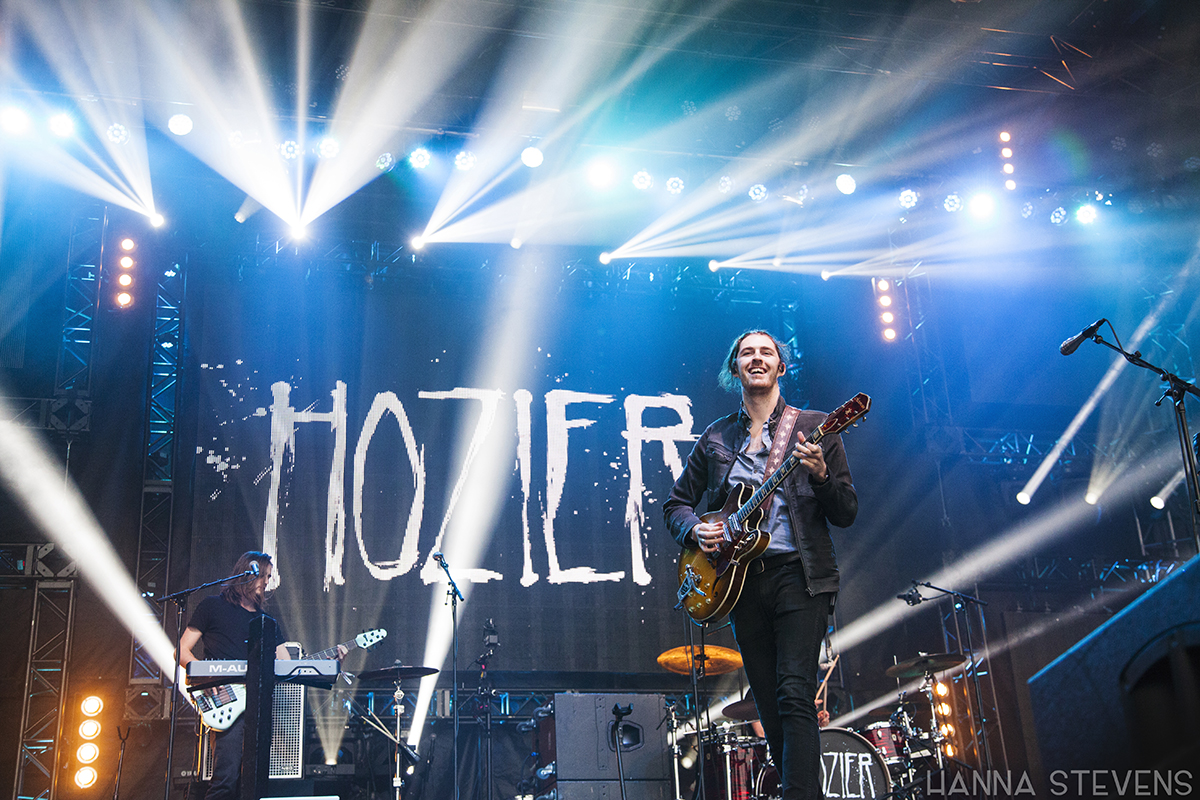 Bumbershoot had a rocky start weather-wise even for diehard Pacific Northwesters, but it ended strong on day three with sunshine and warm temps. During the fest there are the “must see” acts and the “never seen or rarely seen” acts.  This article will cover acts who get little press, unfamiliar acts, as well as a few headlining acts. Featured are some of the more outstanding performances of the day.

LA Indie Rockers, The Moth & The Flame took to the Nevertamed Stage with  European flair. Singer/guitarist Brandon Robbins was passionate and melodic with great range. Dreamy guitars riffs, sonic and ethereal keys, and the drums sounded excellent. Whoever mic’d them did a good job. The big screens projected the artistry of combined live footage interspersed with dreamy video landscapes which gave lawn attendees and sound junkies a great visual and up-close stage experience from afar. TM&TF is currently on a US tour with – In The Valley Below promoting their new EP release Young & Unafraid on iTunes.

The Starbucks stage was all a twitter with rumors of a not to miss performance by soul man Nathaniel Rateliff. Centered under the best backdrop in the world, (the Space Needle), Nathaniel Rateliff & The Night Sweats tore it up!  WOW!  NR&TNS were a great discovery and were a crowd “and” family-friendly favorite.

Apparently Rateliff, formerly known for his acoustic/folk roots, has traded them in for a new-soul sound that has been burning in his belly since his days on the loading docks of Denver. There’s a fire in his words and he delivered a gutsy performance with shouts, claps and finger snaps that rivaled the Motown days of yore. Horns, chugging drum beats, Hammond B3, tambourine, and fantastic harmonies, left the audience wanting more! The whole band put on an interactive and entertaining show. There were many families with headphoned babies, small children, and dancing on the lawn. As the crowd was leaving the lawn,  a boy about the age of five or six was walking away singing, Whoa-Oh, Whoa-Oh, Whoa Oh-Oh-Oh, the chorus from the song “SOB.” Kids are a good barometer for catchy, hit material. Bands who want to know if they have a hit song, should run it past a preschooler or five-to-six year old.

The band recently appeared on The Tonight Show with Jimmy Fallon and delivered an unbelievable performance that earned them a well-deserved standing ovation on their title track “SOB.” From Rateliff’s gritty growl and James Brown-ish moves, he is like lightening in a bottle! They’re appearing on Conan tonight (Sept 15). Find their new self-titled album, Nathaniel Rateliff & The Night Sweats on iTunes.  Allen Stone fans, check this out and don’t miss them the next time they tour through Seattle.

Young, up-and-coming Nashville band, Colony House, were refreshing. Comprised of the sons of Contemporary Christian pop superstar Steven Curtis Chapman, Caleb and Will Chapman have their father’s good looks and apparent inherited talent. Along with drummer Scott Mills, they opened with a rousing, “What’s up y’all?” They gave kudos to the city and said they were happy to be here, which earned them cheers from the crowd. Lead singer, guitarist and principal songwriter Caleb Chapman writes songs that come from some deep personal experiences and he won some hearts when introducing the first song he ever wrote for his first love at 9 years old. He then told the crowd that he married her at age 19 and five months ago, they had their first child. The females were aww-ing and probably a guy or two got a poke in the ribs for not being equally romantic and sensitive. “Silhouettes,” from the When I Was Younger album, is an easy-on-the-ears, radio-ready tune. The band is currently on a world tour.

The Rhapsody stage seemed to be home for the dirty, gritty stage acts. Garage/punk/blues phenom duo, The Bots put on a high energy show. These guys are young, but in 2015 they’ve already been named “L.A.’s most celebrated rock duo” by LA Weekly, and featured in Interview Magazine’s “15 Faces of 2015.” Mikaiah Lei (lead vocal, guitar, bass) and Anaiah Lei (drums & percussion, backing vocal) made their national TV debut on Late Night with Seth Meyers in February,  performing their single “Blinded.” According to their bio, they have already self-released three albums and completed two Vans Warped Tours, two AFROPUNK Festival Tours, and countless European Fests. The Rhapsody stage held some great rock/garage acts over the three days, and The Bots left their mark as well. The duo has  accomplished much at such a young age. Imagine what they’ll be like when they hit their 20s!

Bumbershoot is not just music, it features comedy too! The Comedy Playhouse hosted comedian Bridget Everett. Everett is bawdy, brash, and no holds barred. She’s got a great voice and crowd interaction, but those easily offended by genitalia jokes, and getting motorboated and humped in front of 200 people, may not appreciate her humor. By a show of hands, there were a lot of Bridget Everett virgins, but they did not leave one. A few people walked, but most in the crowed got a kick out of her. Her film, theater and television credits include “Inside Amy Schumer,” “Two Broke Girls,” Sex & The City,” and the Judd-Apatow produced film “Trainwreck.” An Everett Quote: “I may never play Madison Square Garden . . . but I AM going to sit on your face.”  She wasn’t kidding!

Who thinks headliner Hozier is one hit wonder?  Not! He was “anything” but. He was charming, his songs were well crafted and his band and singers were superb! Featuring lovely arrangements with lush harmonies, he has done a fine job of crafting his backup band!

For gear geeks, his guitar collection (which he freely changed out) is phenomenal! His red Bohemian Motor Oil guitar really stood out. It was impressive on the jumbo screens and had a surprisingly great sound quality and tone. Another beauty was his back and silver Danelectro Resonator, just a beautiful guitar and impressive on the big screen. Check out his collection here.

Always a crowd favorite, songstress Ellie Goulding played Memorial Stadium. Goulding closed out the festival on the main stage with a characteristically kinesthetic performance. In an oversized Moschino hockey jersey, Goulding addressed the crowd saying, “You’re the kind of crowd that is so lovely and also attentive. . . I turn into this little shy person wearing their pajamas.”

Goulding’s presence, though, unavoidably commanded the crowd. Her unique vocal quality possesses an ethereal power just as her lyrics seek strength even through brokenness.

The pain of her song “My Blood” was palpable, while her Major Lazer collaboration, “Powerful,” felt like a waltz with romantic optimism. Goulding triggered her vocal samples to start “Only You,” later bashing her floor toms. Her 2011 single “Lights” was revitalized live, dropping into a heavy halftime breakdown at the end, with Goulding’s falsetto ad-libs floating on top.

Robin Fairbanks has spent 30+ years in the Music Industry in many capacities. Working in the Seattle music scene since 2006 as a Manager/Booker, she’s known for her ethics and artist development skills. Robin has guided the careers of many, but most notable as the former Manager of Seattle Garage/Blues band Fox and The Law for 3.5 years. Robin has spent the last 2 yrs consulting with Artists who seek her help as a Music Consultant and Publicist with Setlist Music Solutions LLC. She also gives of her time as an advisor to Seattle Wave Radio, an Internet music station where she helped shape its sound as the ROCK Channel Music Director for 2+ yrs upon its launch in 2010 and where you’ll find her music blog, “Bird On A Wire“. In 2014, Robin also worked as a Contributing Music Writer for Guerrilla Candy.
Related ItemsBridget EverettBumbershootColony HouseEllie GouldingFeatureHanna StevensHozierNathaniel RateliffRobin FairbanksSteven Curtis ChapmanThe BotsThe Moth & The Flame
← Previous Story Bumbershoot Is Here!
Next Story → Bumbershoot Bumbering Along, Looking For Itself