Circa Waves rock out the Crocodile

By Renae Koepke on September 23, 2015@MonkeyJig 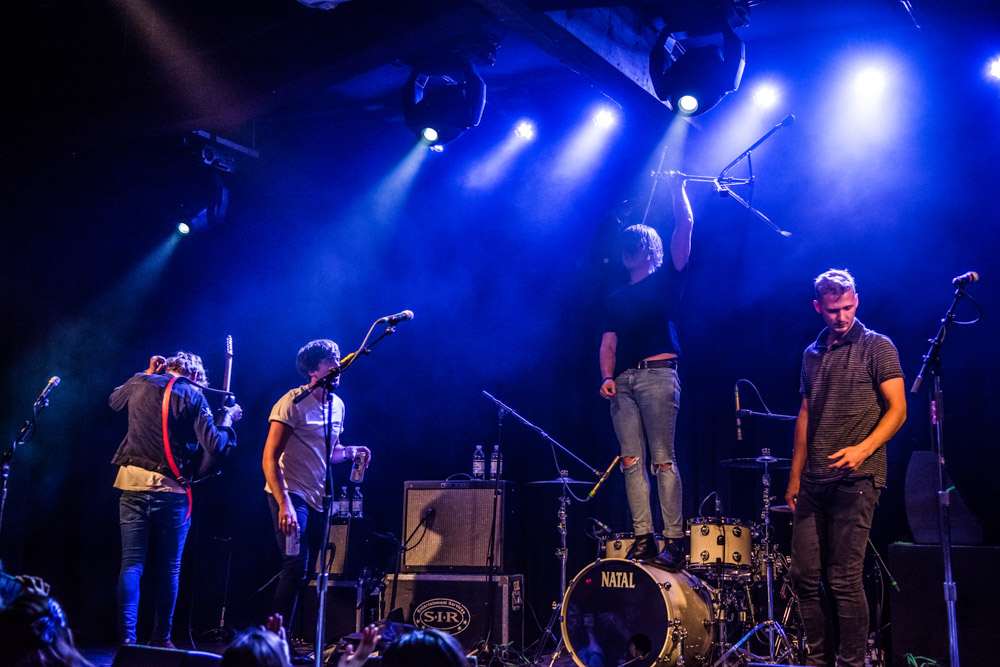 Circa Waves at The Crocodile (Photo: David Endicott)

Acid Tongue opened the night with lovely retro flare. Lead singer, Guy Keltner of Fox and The Law, lit up the stage, rocking out on a vintage styled ML baby blue guitar. They rocked an amazing cover of The Temptations’ “My Girl,” keeping the feeling of summer alive. This surf indie rock remix was meant for hanging with friends, beer in hand and sun on the face.

The crowd thickened for Oberhofer. At the very front was one of their biggest fans, a grandma. Her grandson is guitarist Ben Roth. Seemed like his entire family was there to support the band. The crowd shared their excitement for the show, which featured new songs off of an album that will drop October 5. A truly amazing, tight set. Near the end, lead singer Brad Oberhofer jumped into the crowd while playing his guitar and ran a lap around everyone, creating an energy surge among the crowd.

Circa Waves rode the adrenaline high. These cute British boys rocked out. Frontman, Kieran Shudall, has a youthful, yet vibrant voice. Their fun brit-pop sound made the crowd dance, closing the night with their hit, “T-shirt Weather.” The lyrics felt like an appropriate end to summer as they called out that they remembered t-shirt weather. The crowd clearly did too, as the all too recent shift to cooler weather began to chase those memories away.  Upon finishing their set, drummer Colin Jones stood on his bass drum and hoisted his cymbal stand into the air triumphantly. Shudall then announced that he would be having beers with the crowd at the bar and headed off stage, ending a fun, spirited set straight from the UK.

​Stumbling into writing purely by accident, this Seattle native has always had a deep love for music. Frequenting Seattle’s local venues and festivals since she was a teen (back when El Corazon was Graceland!). When she met a concert photographer who despises writing, they teamed up. And so it began. As a scientist by day, technical writing comes more naturally. The branch into creative writing has been somewhat of a challenge that’s been gladly accepted. Finally becoming a little part of something that she’s been a huge fan of for so long.
Related ItemsAcid TongueCirca WavesDavid EndicottFeatureOberhoferRenae Koepke
← Previous Story “Weird Al” Yankovic in Puyallup
Next Story → Ratatat Lasers The Showbox