Chvrches Ignite a Synth-Pop Explosion at the Paramount

By Alicia Kamenick on October 19, 2015@corianderstem 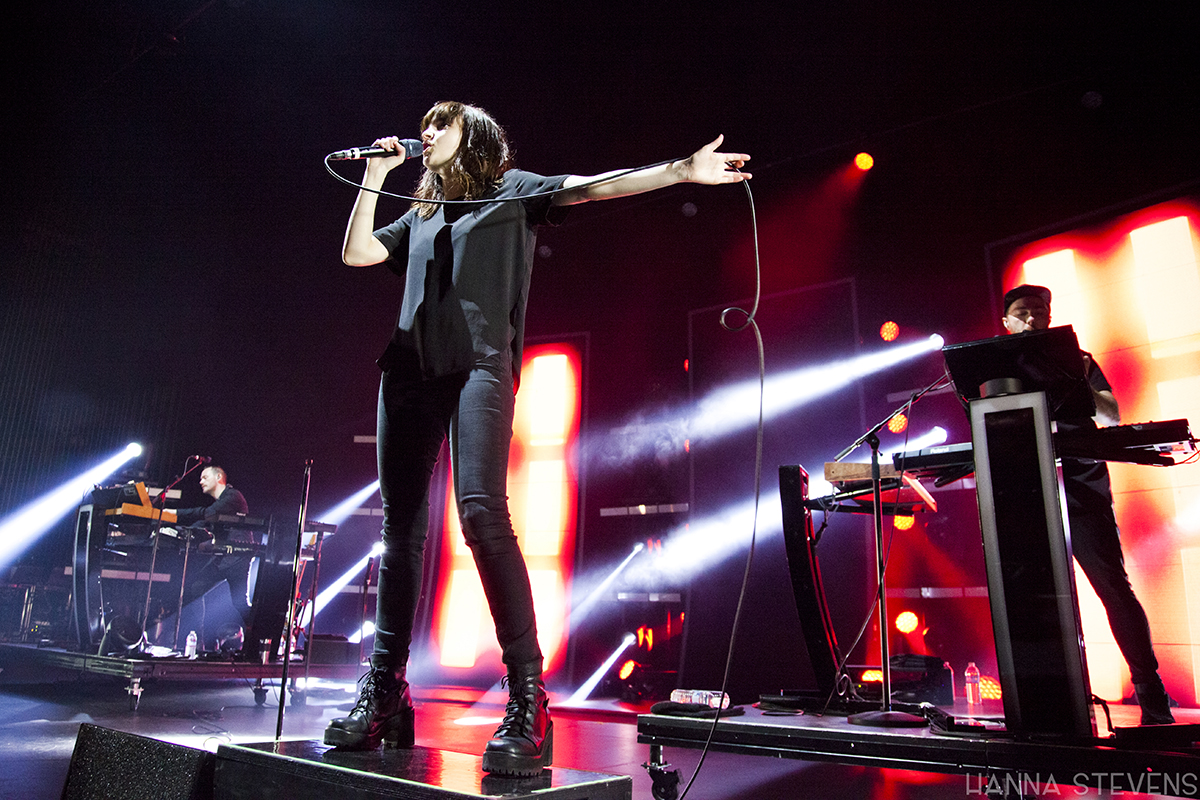 Chvrches – their name might be challenging to type, but their music is easy to love. The Scottish trio’s sound melds the best of the ’80s synth sounds with current electronic dance pulses. Add singer Lauren Mayberry’s sweet high voice on top, and the result is excellent melodic, danceable pop.

During Wednesday night’s show at the Paramount, their 90-minute set included most of the tracks from their two albums, 2013’s The Bones of What You Believe and their new release Every Open Eye. A step up from their 2013 Seattle debut – “We have more than 10 songs now,” quipped Mayberry in her chipper Scottish lilt, “and can play more than 40 minutes.”

With two-thirds of the band (Iain Cook, who also plays guitar and bass, and Martin Doherty) stationed behind banks of synthesizers and samplers for the bulk of the show, Mayberry made up for the lack of on-stage motion, her small form filling the space with energetic movement. A dazzling (if sometimes a little too blinding) backdrop of light graphics provided visual pizzazz, creating moments of impressive silhouettes, particularly for the show closer “The Mother We Share.”

Doherty stepped to the front for a turn on lead vocals with “Under the Tide,” but the only other real shift in vibe was the encore opener “Afterglow,” the sole ballad of the night. A lack of varying tempos should not be seen as a negative, however. Chvrches’ brand of synth-pop fits perfectly with their danceable beats, particularly “Clearest Blue” and the minor-key menace of “Science/Visions.”

Mansionair opened the show – a fitting combo, as the Sydney trio’s debut 2014 EP was released on Chvrches’ imprint label.

Alicia is a Midwest transplant who loves Seattle but misses thunderstorms. Her musical obsessions began when her coolest aunt gave her a copy of K-Tel’s Rock 80 album for Christmas when she was 7. She spent many years studying piano and voice, but the force of rock and roll won, so while she still sings in a local chorale, her true musical passions lie more with The Beatles than with Beethoven. When she’s not working at her job in HR, she can be found singing bad pop songs at the top of her lungs … although sometimes she does that
Related ItemsAlicia KamenickchvrchesFeatureHanna StevensmansionairThe Paramount Theatre
← Previous Story Seattle Loves LEGS
Next Story → Beirut enchants at The Paramount