Slash Still Has It

By Christine Mitchell on October 20, 2015@Housetornado37 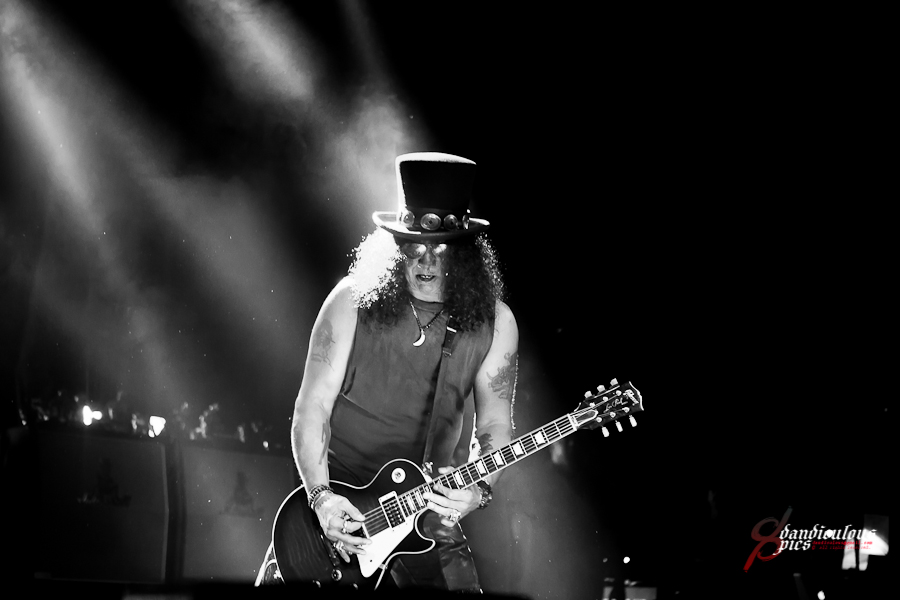 Slash with Myles Kennedy and The Conspirators at The Moore Theater (Photo: Dan Rogers)

Slash is a guitar icon, both in the sense that he is one of the best guitar players alive and kicking, and that the outsized top hat crammed over his mass of black curls and mirrored sunglasses is his visual signature. The packed crowd at The Moore Theatre Tuesday night was there to see both the gifted man and his famous attire. And, as Slash and his band Myles Kennedy and The Conspirators tore through two hours of material ranging from vintage Guns ‘n’ Roses to the outfit’s most recent release, World On Fire, those present were treated to the whole package.

Slash may be older and wiser, but he still looks like a dude that could kick most anyone’s ass. He is a beefy man who shows off his tattooed, guitar playing guns with a variety of sleeveless shirts. The amazing contrast to his physical presence comes when his fingers begin their quick and nimble dance across the entire length of the fretboard. Slash’s guitar solos were incredibly intricate and very metal, and he did it so easily. It didn’t look easy, and it was completely mesmerizing, but Slash pulled if off effortlessly, the only things betraying his concentration being his intense guitar faces and the sweat raining down his arms. When Slash is standing in the spotlight, there is no denying it: what you are seeing is very, very special. Goosebump-inducing special.

While the majority of those present were singing right along with Myles Kennedy & co.’s recent collaborations, the largest roars of approval were definitely heard each time the band launched into a Guns ‘n’ Roses song, of which there were plenty, with “Mr. Brownstone,” “Sweet Child O’ Mine,” and encore “Paradise City” being particular standouts. “Welcome to the Jungle” had a nice vocal switch with bassist Todd Kerns taking a fine turn at the mic. Both Kerns and Kennedy did a fine job handling vocals in the massive shadow left by Axl Rose; while both singers have voices that cleave close to Rose’s, they weren’t overly slavish to the original, which was a relief.  Toss in a cover of Velvet Revolver’s “Slither,” and fans were left happy and sated.

Opening act Raveneye were a great warm up to Slash’s set. Hailing from the UK, the band admitted that they were amazed to find themselves in Seattle for the first time, playing in what lead singer Oli Brown called “the ‘Evenflow’ room,” referencing Pearl Jam’s famous video. The band was full of physical energy, with Brown at times playing guitar with one hand and singing into his microphone held in the other hand. It will be interesting to see what their brand of metal-tinged garage rock brings in the future. Their debut EP Breaking Out is just the beginning for Raveneye.

Christine Mitchell has been poring over album liner notes pretty much since she acquired the skill of reading, and figured out the basic structure of rock songs at an early age. Whether it’s the needle popping into the first groove of the record, the beeps that signal the beginning (or end) of a cassette tape, or digital numbers ticking off the seconds from zero, music brings Christine happiness, ponderous thought, opportunities for almost scientific study, and sometimes a few tears. When she started attending live shows two decades ago, a whole new piece of the puzzle clicked in and she has been hooked ever since.
Related ItemsChristine MitchellDan RogersFeatureMyles Kennedy and The ConspiratorsRaven EyeSlashThe Moore Theater
← Previous Story Escape The Fate Fans Say Yes to “Hate Me!”
Next Story → Doomtree at The Showbox