Doomtree at The Showbox 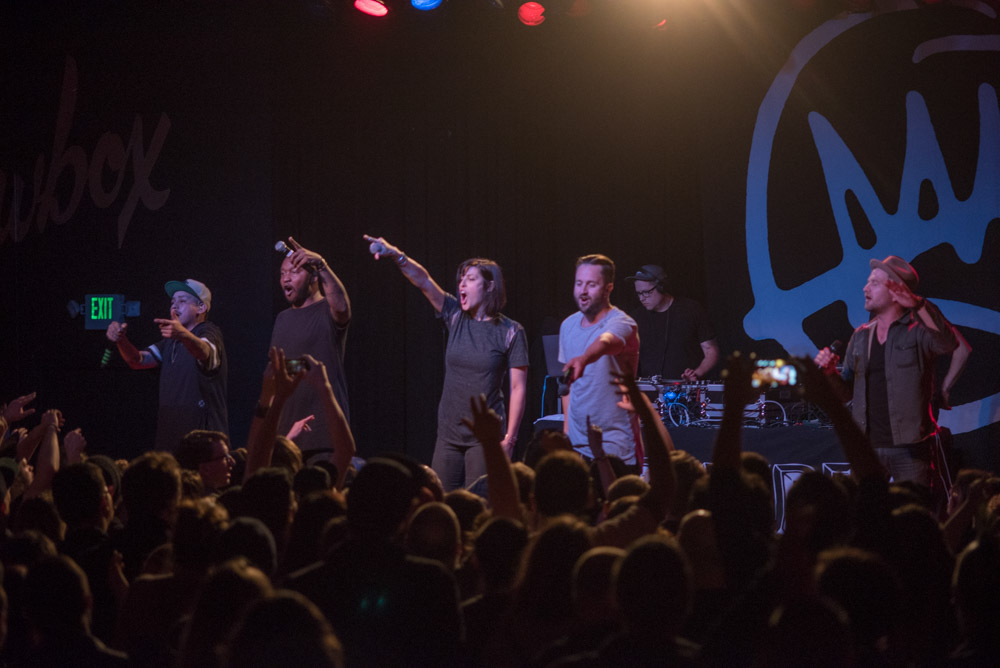 Doomtree came to town on a hell of a Wednesday with Chvrches, The Darkness and Nadamucho’s #41for2015Fest all going on at the same time.  Regardless of the happenings in the rest of Seattle, the Showbox was packed.

Astronautalis opened for indie hip hop artists Doomtree and brought an incredibly intense energy to the stage bellowing “shotgun your long island ice tea and come down and dance,” before telling tales of his previous life in Seattle. He had moved to Seattle for a girl that had done him wrong, he had guns pointed at him, his home burned and had his Sophie’s choice of things to save.  He talked about his travels to Minnesota to partner up with Doomtree in Minneapolis, and even his run-ins with Tegan and Sara. Eventually, he moved into a freestyle session that covered topics as wide-ranging as career goals, taking over the world with his godson, forgoing the debates in favor of baseball, and being the black sheep of his family.  He weaved these seemingly unrelated topics into a tapestry of ideas surrounding intense social/political commentary, his own dreams and those of others and how all of these things tie together.

Closing out the night was Doomtree, made up of rappers Cecil Otter, POS, Mike Mictlan, Dessa, and Sims and producers Lazerbeak and Paper Tiger.  One might ask “what is a doomtree?” and the answer, according to POS, is that it’s an entirely made up word.  Each of the artists brought a different style and feel to the table, yet they formed a cohesive experience.  Dessa, a brilliant wordsmith, moved both in and out of prominence on the stage, as each of the songs progressed with heavy bass and electronic beats dropped by Lazerbeak and Paper Tiger.

As the show came to a close, Sims took the mic and began to explain that this was going to be one of the last Doomtree shows for a while, as their process has started to become pretty standard with each individual artist putting out a solo album in-between each Doomtree album.  This of course meaning that it was time for new solo albums from each of them which is unequivocally exciting.

​Stumbling into writing purely by accident, this Seattle native has always had a deep love for music. Frequenting Seattle’s local venues and festivals since she was a teen (back when El Corazon was Graceland!). When she met a concert photographer who despises writing, they teamed up. And so it began. As a scientist by day, technical writing comes more naturally. The branch into creative writing has been somewhat of a challenge that’s been gladly accepted. Finally becoming a little part of something that she’s been a huge fan of for so long.
Related ItemsAstronautalisDavid EndicottDoomtreeRenae Koepke
← Previous Story Slash Still Has It
Next Story → The Hot Seat with Alex and Juli of Valadares