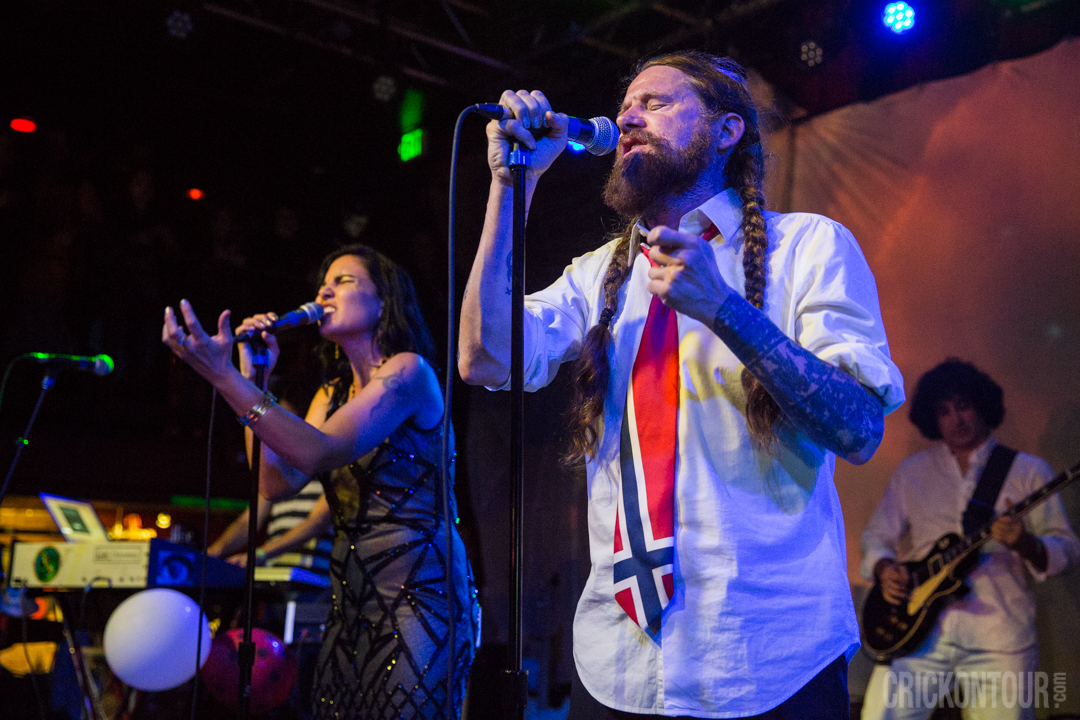 The crowd was made up of numerous 40 to 60-somethings and their kids, and they all piled into Neumos at noon on a Sunday to catch what could possibly be the band’s farewell performance.  Original members of the band flew in from all over the world to be a part of this show, one of them coming from as far away as Thailand.  The show was organized into two sets intertwining songs and band members from the band’s decade-long career.  The first set featured many of the original members, who had not been part of the group for a better part of two decades.  Kicking off the show with “Walla Walla,” the lead track off 1993’s album Exit At The Axis, the band eased their way though many of their psychedelic rock songs, including “Corner Man,” and a cover of the Rolling Stone’s song, “2000 Light Years From Home.”   Later in the set, former guitarist Marc Olsen performed a powerful version of his song “Rosaleen,” which was just as incredible as fans remember hearing the first time, two decades ago.  The first set finished with an extended electronic edition of “Elephant Song” which is half story/half song, and tells the story of Buddha condemning the Elephants to walk the earth.  By this point the band had been on stage for just over an hour and all the kids in the front of the audience appeared to be dying of boredom and had to be taken home.

After a ten minute or so break to shuffle the various newer members of Sky Cries Mary onto the stage, the next set began.  They performed songs off the band’s arguably more popular era spanning from 1993 to their eventual hiatus in 1999.  Leading off with a three-song set from This Timeless Turning gave Anisa Romero a chance to prove her soothing voice was as powerful as ever.  It played well in harmonies with lead singer Roderick Romero’s more raspy sound.  Long time member and bassist Jon Davidson joined in for several of the songs, including “Vuh” and “Every Iceberg Is Afire.”  Later in the set, the band got into a steady groove with the songs “An Ant, the Stars, an Owl and Its Prey,” and “Small Town.”  The show finished with a rather chaotic version of “We Will Fall,” where all the members appeared on stage and singer Roderick Romero layed on the ground screaming wildly into his mic, “I love you Joe,” at random intervals during the song.  In the end, despite the separation of time and distance, the band successfully jelled together to give fans old and new, a performance that they will remember for a decade or so, or at least until the next reunion show – which will hopefully feature a fully recovered Joe Skyward on bass.

Alex Crick is a Seattle based freelance photographer specializing in music photography. His interest in photography began as a school project in the early-90′s, when he also attended many live music shows. Eventually, he combined these two interests by conveying the power and excitement of live music through the eye of the camera. Over the years, he’s traveled all over the country photographing live musical acts. You can find samples of his work in SPIN, Billboard, Esquire. View his work here
Related ItemsAlex CrickFeatureJoe SkywardNeumosSky Cries Mary
← Previous Story Marina and the Diamonds Sparkle at the Paramount
Next Story → Lianne La Havas Wows at The Neptune