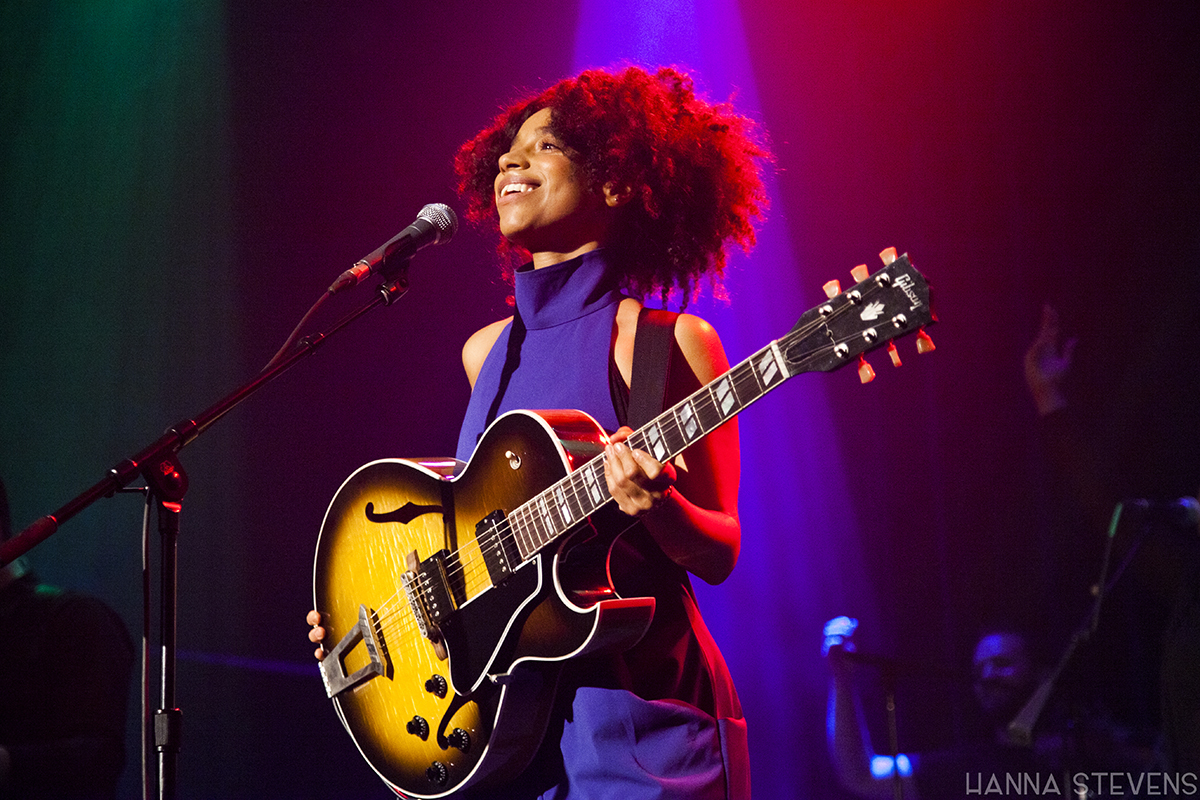 It seems likely that Seattle will see a small, but statistically significant, bump in the birth rate about nine months from now. The Lianne La Havas show at The Neptune was just that sexy. Dressed in a gorgeous low backed blue jumper, La Havas oozed an irresistible confidence and turned in a commanding performance far beyond her years. The diverse crowd hung on her every word and note.

La Havas’ strength relies, in part, on her restraint. She doesn’t over sing or over play. She is unafraid to hold back and relish quieter moments. Then, when she does belt it out and show her full range and power, it is that much more astounding. And, she can seemingly do it all. Not only is she an impressive singer, but she took turns on bass and jazzy guitar throughout the night.

A few times her band left the stage, leaving La Havas solo on guitar. She sang about love and loss, and seemed to radiate a self-possessed resolve even when exposing her vulnerabilities. Songs ranged from bouncy, fun, and infectiously danceable, to slower, slinkier, more subdued affairs.

An early highlight was her debut single “Is Your Love Big Enough,” from her 2012 album of the same name. Her five-piece band was tight and kept the infectious groove, while La Havas, on bass for this song, kept it locked in the pocket. After, she greeted the audience with a grin and a greeting in her British accent. She was warm and gracious, expressing love and appreciation for the crowd many times throughout the night. The audience shouted their love right back.

It’s been two years since La Havas played Seattle, and last time she was at the smaller Crocodile. She has clearly grown as a performer and songwriter. Songs from La Havas’ second album, 2015’s Blood, were quite strong in the live setting. These songs are a departure from the more acoustical leanings of her debut material, and show a move into more soul, R&B, and jazz elements. Yet, she is a difficult artist to pin to any one genre or sound. The album’s opening track, “Unstoppable,” has a funky beat, and La Havas fully embodied the empowering lyrics. She seemed fully committed to the performance, rocking her head wildly as the song swelled. It would be hard not to get swept up in the moment with her.

Next, she returned to buttering up the crowd, saying, “I noticed that you have excellent rhythm. I also noticed that you have excellent singing voices.” It was her charming way to ask the audience to sing along with “Grow.” This one built from acoustic folk to almost more of a rock sound, as people enthusiastically sang along, “turn up for this love.” But that rock energy was eclipsed a few songs later by “Never Get Enough,” which found La Havas throwing herself into a frenzy over distorted guitars. Then the song would snap back to that jazzy, acoustic sound before whipping back up to a frenetic peak all over again. “I like doing that one,” said La Havas after with a sly smile.

The medium to small sized Neptune turned out to be a perfect venue, lending an intimacy and closeness, yet also feeling somehow like a big show, bolstered by La Havas’ big performance and personality. She showed that her songs have depth range, and variety, and she is an impressively accomplished artist for just 26 years old. Expect more big things to come.

For an encore, she came back out solo with a guitar and led with the humorous ode to an older lover, “Age,” wherein she sings, “so is it such a problem that he’s old, as long as he does whatever he’s told?” She did another great, soulful solo number before the full band rejoined her for a powerful rendition of “Forget,” a great way to cap off an incredible show. The crowd cheered loudly before filing out, ebullient, into the cool night.

Isaac Kaplan-Woolner is a live music fanatic and radio nerd living in Seattle. When he’s not attending concerts, he works as an assistant producer for the public radio show Travel with Rick Steves. He also volunteers and occasionally moonlights at KEXP Radio, and serves on the board of directors for the nonprofit Fremont Abbey Arts Center. He got his start in radio with a punk show at the tiny 10 watt station WNMH at his highschool in Northfield, MA, then in college volunteered at KBOO radio in Portland, OR, before landing a job as a DJ and news producer at KOHO Radio in Leavenworth, WA. Isaac collects vinyl, gig posters, ticket stubs, and ukuleles. The first CD he bought with his own money (when he was 11) was a used copy of Public Enemy’s Fear of a Black Planet. These days he listens to all sorts of music, though he still has that Public Enemy CD somewhere.
Related ItemsFeatureHanna StevensIsaac Kaplan-WoolnerLianne La HavasThe Neptune Theatre
← Previous Story Sky Cries Mary Reunites After Decade Long Hiatus
Next Story → Twenty One Pilots: Duo Destroys!