Life In Pictures: Ayron Jones and the Way

By Alex Crick on November 5, 2015@crickontour 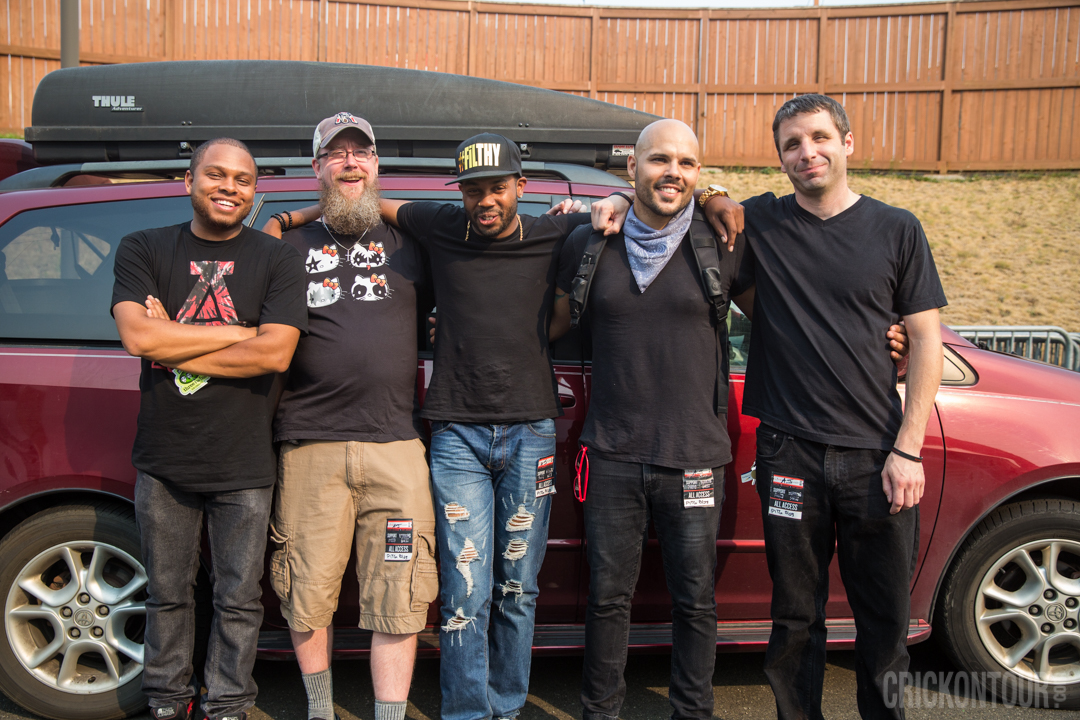 Ayron Jones and the Way crew after their performance at KISW’s Pain in the Grass. (Photo: Alex Crick)

As the sun set against the backdrop of the White River Amphitheatre, the members of Ayron Jones and The Way gave each other hugs, said their goodbyes, and headed back to Seattle, knowing that this time was different.  This goodbye was quite possibly the last time this band of brothers may ever share the same stage again.

The day started off easily enough.  It was a crisp Sunday morning in August as I arrived at the suburban Redmond house where I’d been directed to meet by band manager Mackenzie McAninch. Jones and McAninch were already at the house along with equipment manager Andy Gates.  Over the course of a half hour or so, bass player DeAndre Enrico and drummer Kai Van De Pitte both arrived.  We all hung out for a bit, indulging ourselves with a quick breakfast of scrambled eggs and hash browns (courtesy of Mrs. Gates), before piling into a car and a minivan for the long haul out to Enumclaw. 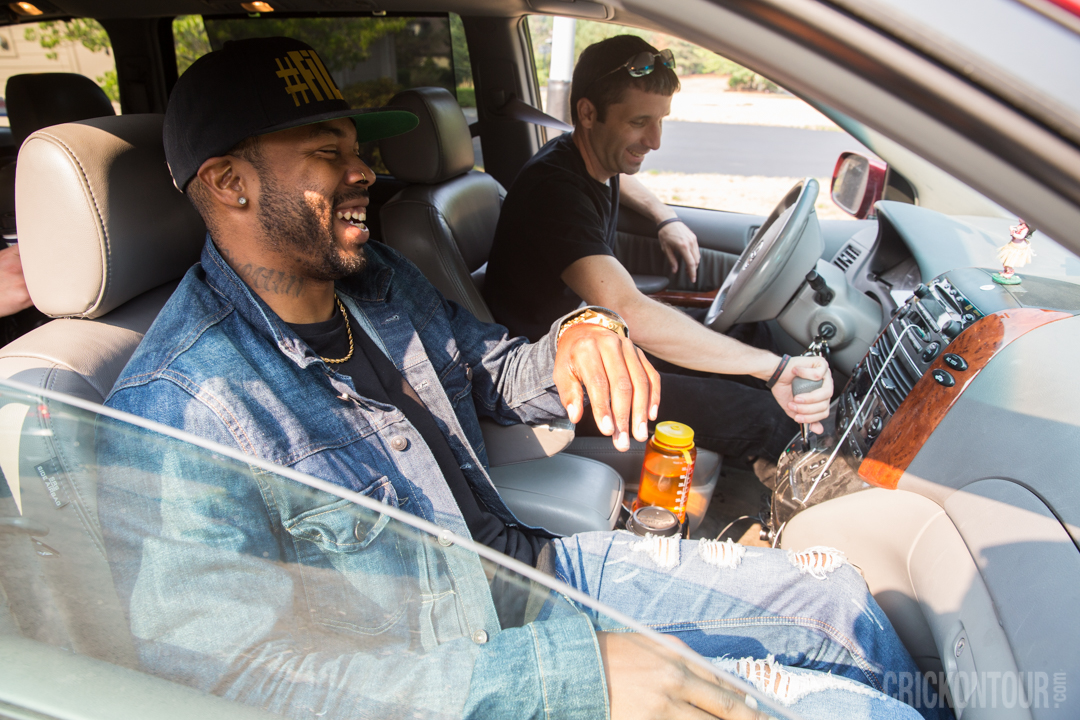 Ayron Jones and Mackenzie McAninch share a laugh as they head to White River Amphitheatre for KISW’s Pain in the Grass. (Photo: Alex Crick)

We arrived at the venue around 12:15 p.m., where a huge line of folks had already formed, and the band immediately started unloading equipment. Almost on instinct, Van De Pitte started piecing the drum kit together for the band’s set.  As I poked around backstage, I saw the on-site crew setting up the last of the rigging for the day’s show.  I also noticed the giant demonic looking goat head resting above the center of the stage.  Apparently, this goat head belonged to the band Slipknot, who headlined Pain In The Grass 2015.  Jones and Enrico continued tune ups on their instruments while Van De Pitte, who had finished setting up the drums, was admiring all the other pre-assembled kits that were sitting around backstage.

We all headed in for lunch and grabbed a table in the artist’s lounge backstage, where McAninch sketched out a basic outline of a setlist.  The band only had 30 minutes to play, and with seven bands following them, it would be a speedy turnaround.  After a quick lunch, the band began hauling their equipment over to the stage and setting up.  I hung back with McAninch, who had the list down to six songs, though he wondered aloud if he’d have to cut it to five in order to save time.  We met up with the band to decide which song to cut.  It was either a cover of Jimi Hendrix’s “Voodoo Chile,” or “Baptized in Muddy Waters,” for which they’d made a video.  The band seems split on which to cut, so McAninch put both down and let Jones make the call based on the crowd’s response. 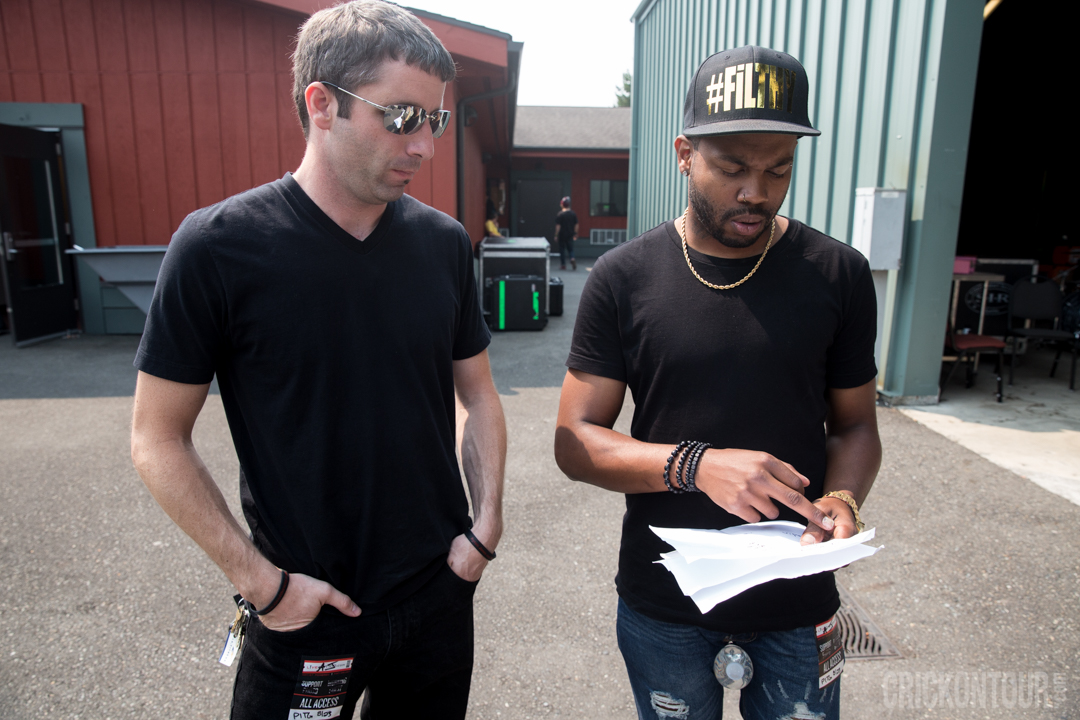 Mackenzie McAninch and Ayron Jones reviewing the setlist before taking the stage at KISW’s Pain in the Grass. (Photo: Alex Crick)

By 1:00 p.m., the band started a sound check. Gates, the equipment manager scurried around stage, securing various cables, amps, and microphones.  It was a tight squeeze already, but the stage manager encouraged them to pull further forwards “to make it easier for everyone.” More and more people come out from the wings to help bring in pieces of the band’s gear.  The band warmed up with a sound check, playing snippets of various famous songs (“Another One Bites The Dust” was pretty popular), as the VIP crowd members trickled in.

After an introduction by a KISW DJ, the band launched straight into “Boys from the Puget Sound,” the first single from their forth-coming album.  The mainstage crowd (already a couple thousand strong for the early performance) was into it, dancing and cheering. McAninch watched from the wings as the band started their fourth song and it was time to choose. Jones gave a quick nod to his bandmates and the opening notes of “Baptized In Muddy Waters” burst from the amphitheater’s mammoth-sized speaker system.  Out of nowhere, a drumstick appeared in Jones’ hand as he launched into an epic guitar solo.  He slid the stick rapidly across the guitar pickups while his other hand fingered furiously to align into the proper chords. 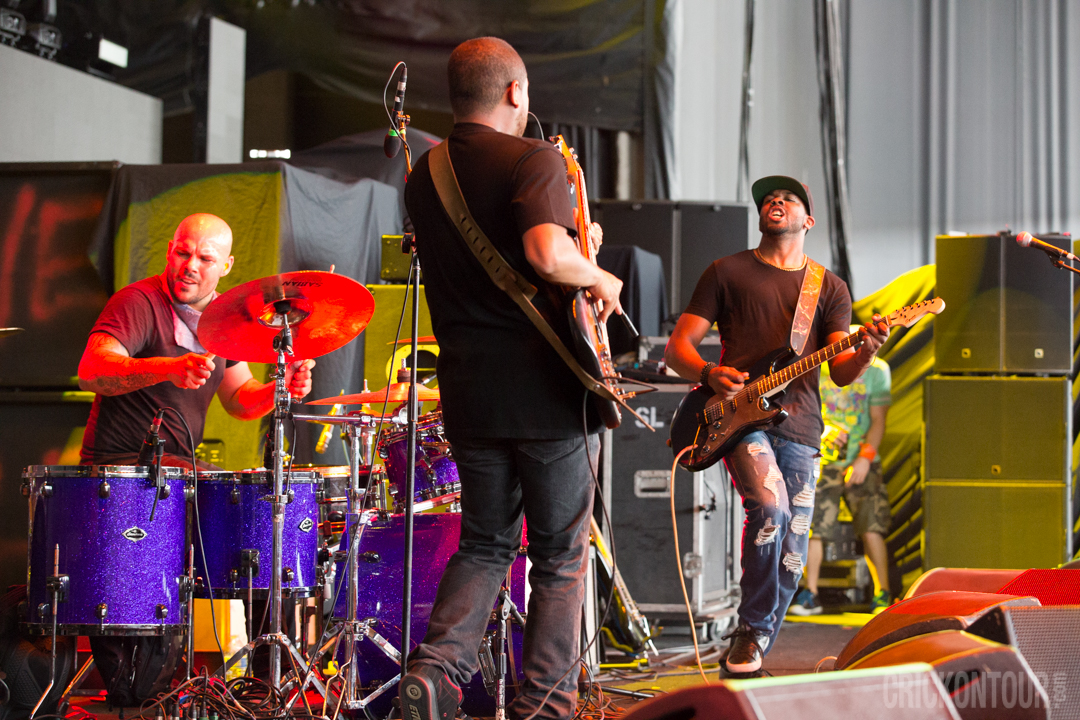 Ayron Jones and the Way rocking out at KISW’s Pain in the Grass. (Photo: Alex Crick)

The band finished up with a spectacular cover of Hendrix’s “Voodoo Chile,” but as the song finished, Jones took off his guitar, grabbed it by the neck, and began smashing it wildly into the concrete stage.  The crowd loved it!  Jones, Enrico, and Van De Pitte all ran to the front of the stage and threw goodies to the crowd.

Once off-stage, the guys took a breather before packing up the gear.  At one point, Van De Pitte walked over to Jones and enclosed him in a giant bear hug.  As the gear was loaded back into the maroon mini-van, Van De Pitte noticed one of his drum kit cases was missing.  A minor moment of panic occurred as he searched the area.  Fortunately, the case turned up on the side of stage where the next band was already performing.  He wrapped up the last piece of the drum kit in towels and a t-shirt, “I don’t actually have a case for it,” he explained.

McAninch prepped the band prior to their interview with KISW’s Men’s Room.  “No swearing!” He also talked to the band members about the possibility of posing with some of the puppies and kittens they had backstage that were up for adoption, and went off to pet a kitten while the band kicked back and relaxed. 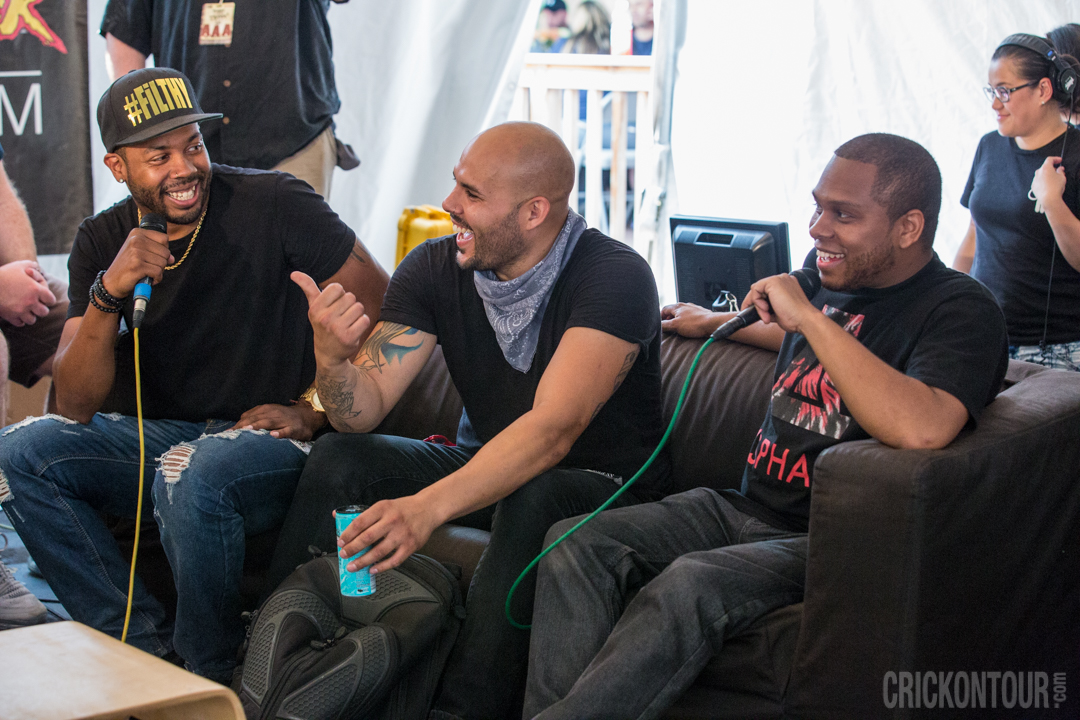 Ayron Jones and the Way interviewing for a segment of KISW’s Men’s Room. (Photo: Alex Crick)

The band gathered for their last interview together – Van De Pitte is moving to Nashville to pursue a career in Christian Rock, and Enrico is retiring from music to take a full time IT job.  Jones thanked his bandmates for helping him get to where he is, and said he looks forward to where his career is headed.

At 4:45 p.m., the band began packing everything up and saying their final goodbyes. Van De Pitte appeared out of nowhere and the band posed for a few photos before saying their final farewells. Then, they all literally drove off into the sunset, ending an era in Ayron Jones history.

You can catch Ayron Jones and the Way performing at two upcoming charity shows for MusiCares at The Tractor Tavern in Ballard on November 20 with The Young Evils and The Hollers, and November 21 with The Staxx Brothers and Grynch.

Alex Crick is a Seattle based freelance photographer specializing in music photography. His interest in photography began as a school project in the early-90′s, when he also attended many live music shows. Eventually, he combined these two interests by conveying the power and excitement of live music through the eye of the camera. Over the years, he’s traveled all over the country photographing live musical acts. You can find samples of his work in SPIN, Billboard, Esquire. View his work here
Related ItemsAlex CrickAyron JonesAyron Jones and The WayDeAndre EnricoFeatureKai Van De PitteKISWLife In PicturesMackenzie McAninchPain In The GrassWhite River Amphitheatre
← Previous Story Mac DeMarco Older, Wiser, and Wilder at the Moore Theater
Next Story → Time Moves Forward With March to May