Mac DeMarco Older, Wiser, and Wilder at the Moore Theater

By Victoria Holt on November 5, 2015@holtvictoria 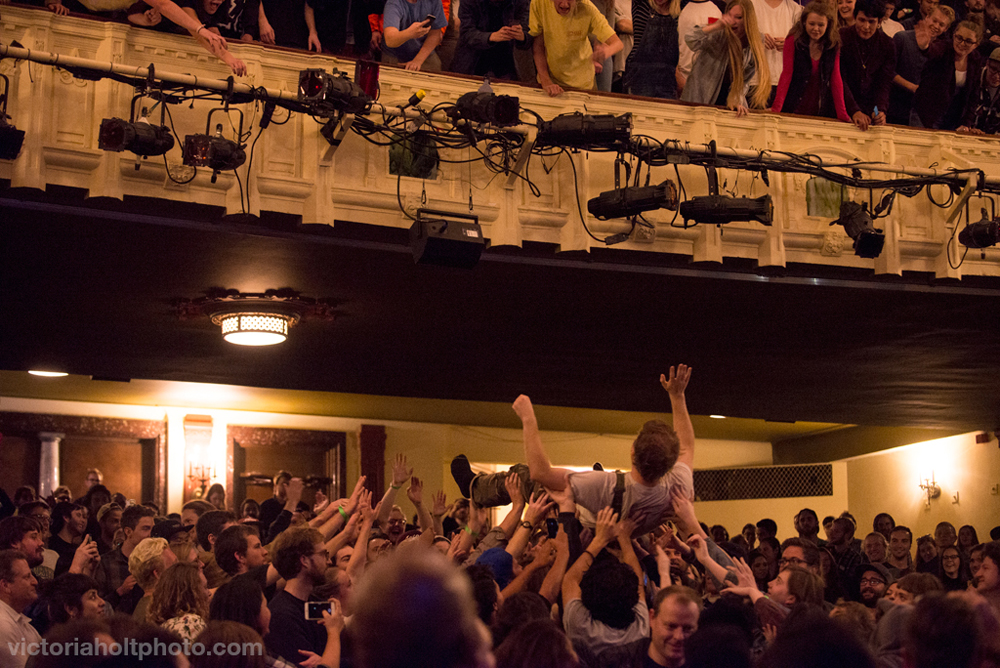 As Mac DeMarco and his bandmates wrapped up their first song at the Moore Theater Thursday night, bassist Pierce McGarry looked out at the crowd. The venue was much larger and more elaborate than their previous stops in Seattle (Chop Suey; The Neptune), and McGarry noticed people in the opera box to his right. As he looked up at them, he said, “We’ve got the old guys from the Muppets out here. What do you got to say old guys? What do you got to say? They ain’t gotta say shit.”

Truth be told, it’s hard to find fault with DeMarco’s blend of chill rock. It’s incredibly catchy and puts the listener in a trance-like state of calm, stopping just short of cheesy tropical twang. His lyrics move effortlessly from reflective to hilarious without missing a beat. Despite his prolific touring and recording schedule, DeMarco is often pegged as a stoned slacker. Just a year since his popular release Salad Days, he’s already put out Another One this last August. It’s a “mini-LP” of songs in his usual vein of summery rock. He’s known for his rolling, fun cheeriness, with bright chords and just the right touch of reverb. He likes to goof off, especially live, releasing shrill cackles and pulling silly faces at crowd members. High school girls in crop tops shriek with delight, throwing up hand symbols of hearts and snapping photos on their fluorescent iPhones. Even the sulky teen guys lose composure, yelling out jokes or the ubiquitous “I love you, man!”

But something in the new songs was different Thursday night: brooding lyrics, romantic themes, and heavy use of minor keys. While some still held their buoyant bop, others sighed, the work of someone going through a rough time (or at least contemplating it). Title track “Another One,” meanders listlessly, its gorgeous, effects-laden keys reminiscent of Air’s melancholic masterpiece for Virgin Suicides. Its lyrics are those of someone who knows that their lover has eyes for someone else. It’s the feeling of defeat, of accepting that you’re a spare. It’s hard to make such a sad song catchy, but he’s the Mac, and he has a knack for such things. The refrain, “Must be another one she loves” goes around and around, looping endlessly, feeling like the unshakeable doubt of heartbreak.

“A Heart Like Hers” hits rock bottom, as DeMarco laments that he’ll “never believe in a heart like hers again.” It’s the kind of song for crying along to, wallowing in nostalgic twangs and myopic misery. “All that I could give, all I had to offer her, is gone, simply locked away, no longer there to bother her.” It’s a universal sentiment, shared by many at one time or another in their lives. It’s hard to hear DeMarco so low, and the songs are that much sadder when juxtaposed with his former spark on favorites like “Freaking Out the Neighborhood.” It’s hard to tell whether these are DeMarco’s thoughts, or whether he’s living vicariously, exploring new themes.

Despite its heaviness, the album gives the listener a break here and there, lightening the sonic palette even if the lyrics stay serious. Another One successfully pairs difficult introspection with playful daydreaming, fostering a place of thoughtful relaxation. On “Without Me,” there’s a glimpse of progress. DeMarco ruminates: “Will she find love again tomorrow? I don’t know, I hope so . . . as long as I know she’s happy.”

A popular shtick for the group is to plan massive after-parties with the crowd. The band’s friend came on stage and urged everyone to text a number to stay in the loop, and to speak up if they have a huge space for hosting. After a few songs, the friend announced the address of a UW frat who had volunteered. Would DeMarco and his bandmates really show up? Regardless, that address was about to have a lot of visitors!

Closing with the track “Together,” DeMarco had his boyish charm back. He belted out the chorus, crowd surfed to the sound board and back, and took off his pants, dancing with his shirt on his head. In the past, he’s climbed up into rafters or jumped off of balconies, but the Moore was just a little too big for him. McGarry climbed onto his speaker stack, but venue staff quickly ushered him back down. The band’s usual influx of cigarettes was also absent, perhaps due to venue codes. Since they couldn’t rely on their usual antics, DeMarco explained, “This is a different style of encore, so make yourselves at home. We’ve never tried this before.” They blasted Haddaway’s “What is Love” at top volume, dancing around the stage with fans pre-selected to run out from the wings. Openers The Courtneys from Vancouver, B.C. and Alex Calder of Edmonton, Canada could be seen dancing along. The party deflated on stage, the house lights came on, and the night had ended. Moore staff looked increasingly annoyed, shooing people off stage and attempting to clean up as the song still blared. DeMarco wasn’t going to let the larger venue or thoughts of heartbreak deter him from one of his main passions: going buck wild.

Originally from San Francisco, CA, Victoria completed her Bachelor of Fine Arts in Photography at Seattle University. Her passion is making live music look as great as it sounds. Her work has been featured in The Stranger, The Seattle Weekly, The Capitol Hill Times, and online with KEXP, Live Music Blog, and Back Beat Seattle. Her 2012 BFA thesis, “Seattle DIY: Live Music,” has exhibited at various venues in the Seattle area, and offers an in-depth exploration of six “Do-It-Yourself” underground spaces. For a behind the scenes look at music, she shoots in-studio performances at local radio station KEXP.
Related ItemsAlex CalderFeatureLive Musicmac demarcoPierce McGarrythe courtney'sThe Moore TheaterVictoria Holt
← Previous Story Florence and the Machine Fills KeyArena with Giant Sound
Next Story → Life In Pictures: Ayron Jones and the Way