By Christine Mitchell on November 9, 2015@Housetornado37 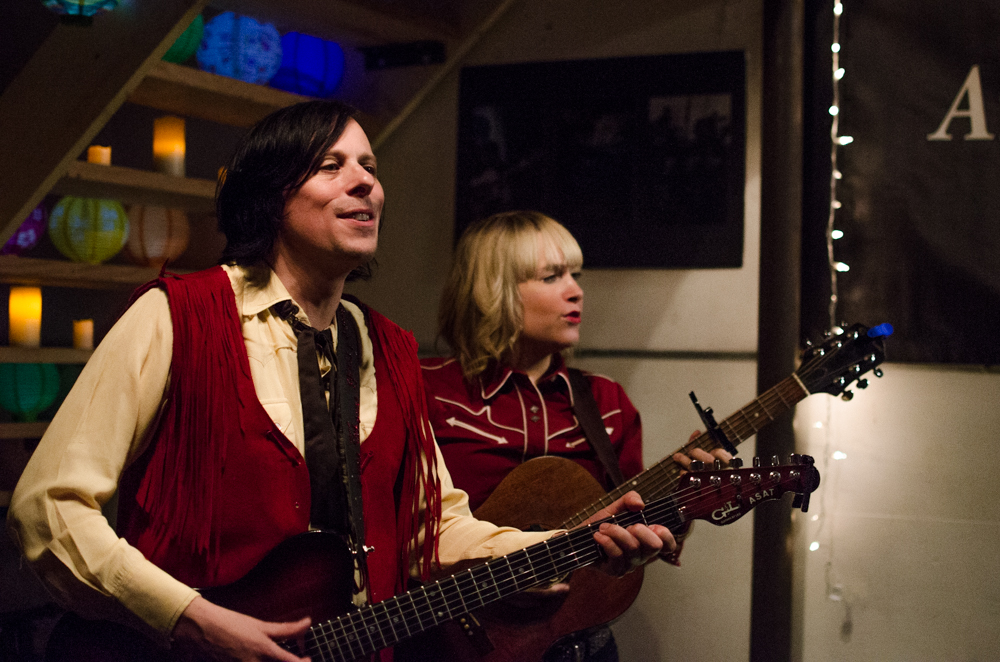 As the rain streamed down last Saturday night on North Westlake Avenue, people could be seen hurrying across the street to a nondescript bunch of industrial-looking buildings. Conduit Coffee is located there, and warm light beckoned from the windows. Something special was brewing inside, and for once it wasn’t a cup of joe. It was something that was even better on a stormy evening: a Seattle Secret Show with Ken and HOLLY, on tour to promote their new album, The Record.

The Record, a country concept album involving a slew of great musicians including Shelby Earl, Matthew Caws of Nada Surf, and Vicki Peterson of The Bangles, and created as a loving homage to Willie Nelson’s Red Headed Stranger, was performed in full the next day at The Tractor Tavern (with many of the musicians involved participating). The duo’s Seattle Secret Shows performance was far more spare, with a set of Ken and HOLLY taking turns singing their solo work followed by a set of stripped-down versions of several selections from The Record.

Ken Stringfellow is widely recognized as one of the best songwriters around through his work with The Posies and extending well beyond. He performed his solo work with great emotion, at times stomping his cowboy boots (which seemed very loud in the venue; everyone was completely silent and attentive), or scrunching his face up to hit a certain phrasing just right. HOLLY’s lyrics were well-crafted too; as part of their PledgeMusic campaign she wrote songs for a commission. One might think that a song that comes about in that way might come off as less invested or just plain weird, but HOLLY turned people’s ideas about chihuahuas, mashed potatoes, and even the death of a spouse into great music.

The between-song banter was every bit as entertaining as the actual music. Ken and HOLLY sassed each other relentlessly throughout the night like a couple of siblings who can’t stand to be in the same room, yet can’t fathom being apart. Stringfellow’s “Your mother is a <insert object here>” went on and on and was endlessly funny. A story about “whiny Shackleton” told between the two had the crowd belly laughing.

Their songs from The Record were smartly goofy as well (it will be released to larger audiences on Nov. 20). And, for the fans of The Posies, Stringfellow performed a highly emotional version of “You Avoid Parties” from Dear 23, and played “Solar Sister” (from Frosting on the Beater) as a lovely encore; the crowd encircling him reverently as the incessant rain pattered on the roof. This secret is one worth sharing.

Christine Mitchell has been poring over album liner notes pretty much since she acquired the skill of reading, and figured out the basic structure of rock songs at an early age. Whether it’s the needle popping into the first groove of the record, the beeps that signal the beginning (or end) of a cassette tape, or digital numbers ticking off the seconds from zero, music brings Christine happiness, ponderous thought, opportunities for almost scientific study, and sometimes a few tears. When she started attending live shows two decades ago, a whole new piece of the puzzle clicked in and she has been hooked ever since.
Related ItemsChristine MitchellConduit CoffeeFeatureHOLLYHolly MunozKen and HollyKen StringfellowSeattle Secret Shows
← Previous Story Tyrone Wells Chooses to “Roll With It” at Storyville Coffee
Next Story → All in the family with My Brothers and I (Video Interview & Photos)