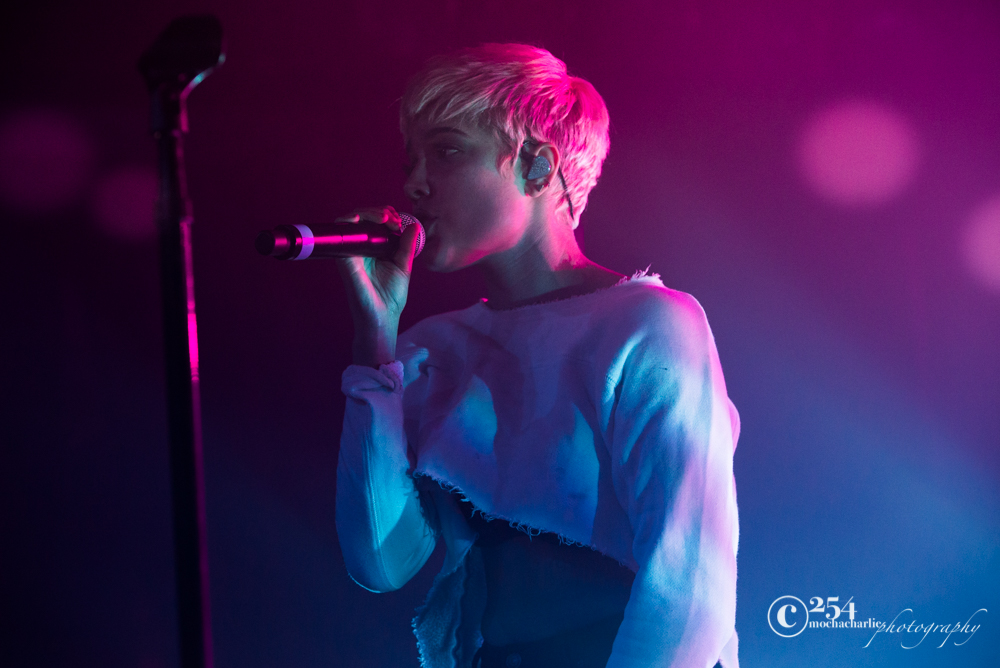 It may seem like an impossible feat, but Halsey (Ashley Nicolette Frangipane) has only been writing music for four years. In that time, she’s released an EP, a full-length album (has already begun writing her second), and has hundreds of thousands of fans across the globe. Her on-line videos have over 20 million views combined, and she’s a musical guest on Justin Beiber‘s song, “The Feeling,” off his new album, Purpose. She’s toured with The Kooks, and Imagine Dragons, and now she’s on a headlining tour that will span the world well into 2016. Some may say she’s “what’s next” in pop culture, but by the looks of her resume, she’s already here.

Halsey played The Showbox SoDo last week (a show that had been sold out for months), and sang songs off her EP, Room 93, and her album, Badlands. Fans began lining up early in the day, standing and sitting in the rain for hours and were not disappointed once Halsey took to the stage. She refers to her fanbase as both “sick” and “unique.” She enjoys hearing her songs sang back to her, sometimes pretending to forget lyrics, just so she can hear them shouted back at the stage, stating “You guys give me a new reason to be excited every night, you’re one hell of a crowd.” She paused briefly to request that the crowd behave, because she hates it when fans get hurt and don’t respect one another (a situation occurred at her show in Houston in October, at which she threatened to stop the show and leave). Unfortunately, she was the one who got hurt during her Seattle show, breaking two fingers while performing on stage.

After saying, “It’s hot as hell in here,” she asked if she could slow things down and sing a love song to the crowd. As she began to sing her song, “Drive,” the crowd began to sing every word, as if it was they who were singing a love song to her. Nearly every cell phone in the venue was raised in the air, lights turned on, fans waving them to the beat of the song. Shouts of “I love you,” could be heard throughout the night. She tries to say something new every night prior to her song, “New Americana,” and if you’re familiar with the lyrics, you’ll know why she chose to make a joke. “Seattle, you were raised on Nirvana, right?” Confetti & smoke canons went off and fans jumped, danced, sang, and shouted lyrics into the air.

For fans who have been following her from the beginning, and who have had, and will have, the opportunity to see her on this tour, know Halsey. With the help of her video channels, other social media, and now her numerous live shows, her fan base has grown exponentially. At 21, she may have just begun to make her mark in the music industry, but with what she has achieved thus far, she has great potential to become the next iconic pop star. It was just announced this weekend that she sold out her show at Madison Square Garden (tickets have been available for less than two weeks). That show isn’t even scheduled until August of next year.

Mocha Charlie is an amazing photographer who has a real passion for music. She covers and shoots several shows per month in and around the region. She a brilliant photo journalist but most importantly, she is also a mother who does her best to balance out her life and live it to the fullest. Mocha Charlie uses her passion and talent to support the community, her friends and family any way that she can.
Related ItemsFeatureHalseyMocha CharlieShowbox Sodo
← Previous Story Leon Bridges at The Neptune
Next Story → Wimps Celebrate Release of “Suitcase” at the Funhouse