‘The Narrow Valley’ Release with Bryan John Appleby and Friends 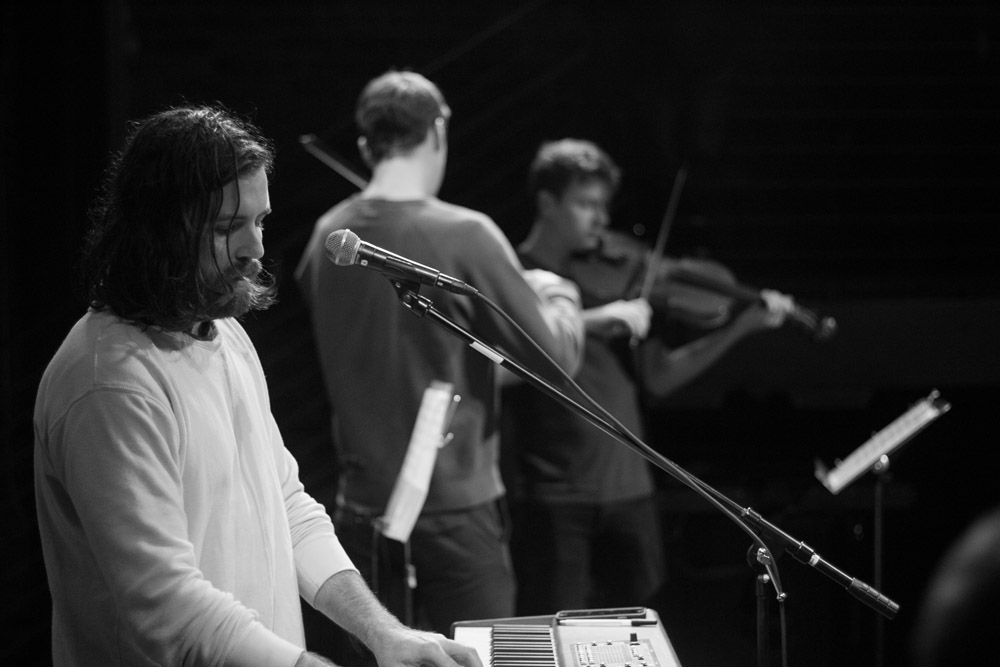 Bryan John Appleby and his band of jolly compatriots assembled on the stage of the Columbia City Theater this past Friday to officially release his second full length album, The Narrow Valley. After four long weeks of shuffling from town to town in a 15-passenger van/adventuremobile, Appleby, Joe Ruppert (bass), Kyle Zantos (guitar, keys) and Cole Mauro (drums) were joined by an assortment of Seattle friends, who together, presented the album in a most glorious and captivating manner.

As guests entered the venue and loosened up with a beverage or two at the theater’s bar, Deep Sea Diver’s Elliot Jackson and friend Jon Mansen entertained as Storm Handler, performing freestyle synth/keyboard numbers with ferocious tenacity. After the main theater doors opened, Seattle’s Draemhouse kicked things off with an upbeat set on a stage styled to resemble a lucid dream, scattered with an abundance of Christmas lights and glowing orbs draped in white. Though the set was quite loud in comparison to Appleby’s sound, Draemhouse got the crowd’s blood circulating and boosted anticipation for the performance to follow.

When the stage cleared, Appleby’s band took their places and began the journey of The Narrow Valley. As noted in an earlier interview with Appleby, listeners should note that the new album follows a single narrative of a California town before experiencing a catastrophic event. Even though the new tracks were played out of their original order, and with a few old favorites mixed in, the dark, lush and ominous tones were clearly felt, thanks in part to the band’s special guests that evening.

Joining Appleby and his band on stage were Sam and Jacob Andersen (Hey Marseilles) on strings, Elliot Jackson on percussion, Rosalyn DeRoos (Choroloco) on clarinet, and a choir of backup singers comprised of Jessica Dobson (Deep Sea Diver), Shenandoah Davis, Shay Carlucci, Devin Busch and Taz Gue. Needless to say, the sounds that echoed throughout the hall of the historical theater were as full as the stage that night.

As was Appleby’s intention, the audience experienced The Narrow Valley in a way that mirrored the viewing of a classic Disney movie, such as Dumbo or Fantasia. “Music with a very cinematic quality has been my jam for a long time. I love it. Think about Disney’s Robin Hood, the feeling you get when you hear Roger Miller pluck that warm guitar and start in on kazoo. That warmth, that was something I was after,” commented Appleby in his interview with Do206, linked earlier. To experience the new album for yourself, head to Appleby’s bandcamp and pick up  the double vinyl, CD or digital copy, also available on iTunes.