Home / Artist Spotlight / Inside Out / INSIDE OUT: The Art of Being a Good Audience

INSIDE OUT: The Art of Being a Good Audience

By Robin Fairbanks on November 23, 2015@robinfairbanks 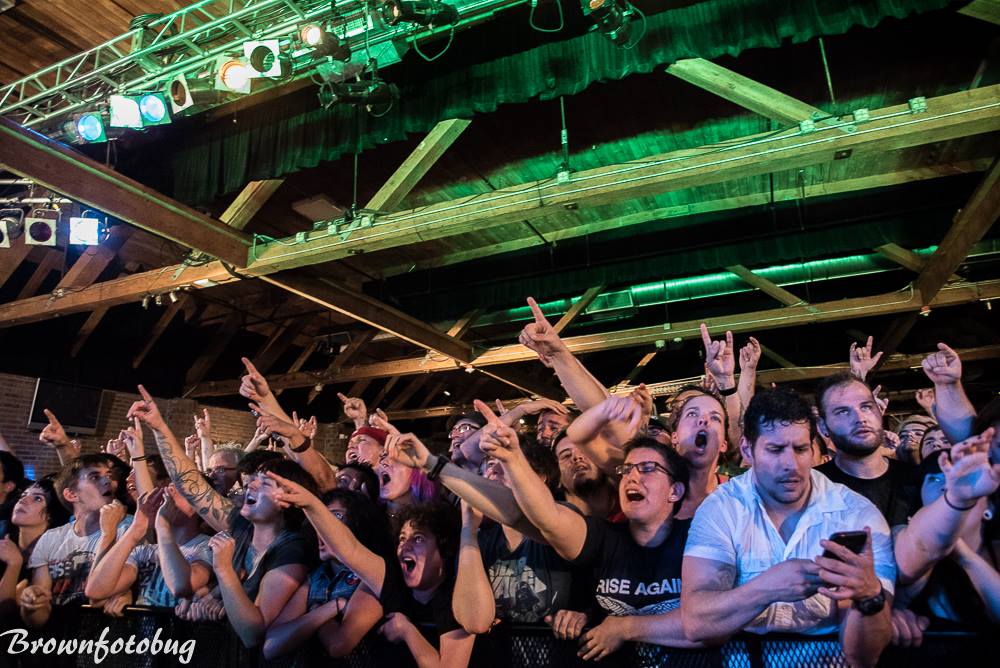 Don’t be that guy (on his phone at a recent Rise Against show). (Photo: Arlene Brown)

INSIDE OUT is a look from within the Music Industry.

{Editorial note: this editorial opinion piece reflects the views of the author alone}

When you buy a ticket to a show, there’s an expectation that you’ll get your money’s worth, the artist will play your favorite songs, be in top performance form, entertain, and give you the ultimate fan experience. But, did you know that the performer also holds an expectation of you, the fan?

Performers have put in endless hours of sacrifice, rehearsal, money, and miles to entertain their fans. They’re excited to be in your city and club. As a touring act, they roll into town on fumes from the show the night before on little sleep, cigarettes, and Red Bull to give you what you expect and deserve, and to make sure you don’t leave disappointed.

Your local headliners often put together a bill with bands they like and respect. It has become a disturbing trend for fans to just show up for their favorite band or chat in the room when their band is not onstage. What they may not realize, is that they are disrespecting a band who has rehearsed and is excited to play for new fans as well as old, and their fans have paid to see and hear their favorite band. They are robbing them of that experience, as well as disrespecting your favorite band who put the bill together. As a fan, you should listen to all the bands on the bill. How do you like it when other band’s fans talk and disrupt the fan experience you paid for? You bought a ticket for a three-band bill, so give your kind attention to all of these hardworking bands.

If it’s your band’s CD release party, they’ve put a lot of thought into their opening and direct support act. This is a big night for them. Some have planned for months, so please show respect for the bill they’ve put together with bands they thought you would like. If it’s a CD release show, make sure you bring some cash (not every band uses a Square) to pick up the new CD and accompanying merch. This is how a band makes their money, not on your ticket. Bands outlay a lot of money on recording, CD design, duplication, and merch, and it is their hope to recoup their expense. They’re counting on you to pick up something at the show. 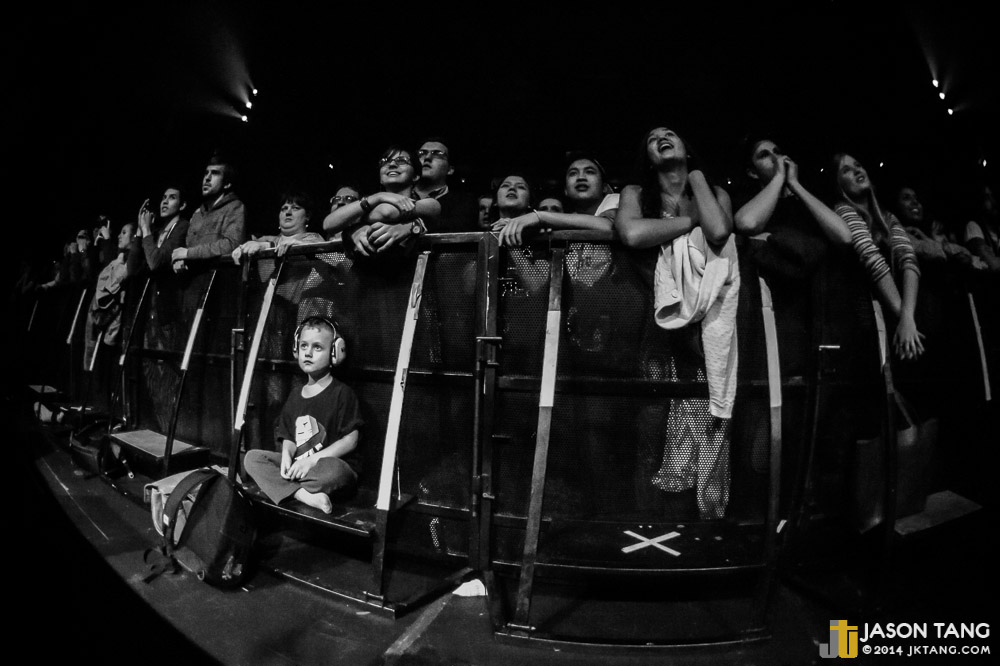 Be more like these The Head and the Heart fans enjoying their show at The Paramount Theatre. (Photo: Jason Tang)

Suggestions for a Successful Show Experience

Clubs need to take more responsibility. At a good comedy club, if patrons talk or are unruly, they’re given one warning and then asked to leave. It’s disrespectful to the performer and disruptive. Would you allow someone to disrupt your sales presentation or speech at your job? I think not. Performing is a job, and artists need to be treated with the same business courtesy. I would like to see clubs follow the comedy club rule. Fans will become better fans when they know what is expected of them and the consequences of bad behavior. Missing their favorite band that they paid for one time might be enough to make them realize that the club means business, and security will not tolerate disruptive behavior that ruins it for their other paid guests.

One of my favorite venues is The Triple Door because I know I will always have a great fan experience. Fans are respectful, and there is no disruptive chatter. Why? Because the venue will not allow it. Seattle Living Room Shows operate in a similar fashion. Besides bringing in great acts, the show is controlled. The Watt Sisters are very vocal about no chatter and giving full attention to the artist. Kristen Watt has no problem telling fans to be quiet, and asking for your attention, or postponing the next act until order is restored, if needed. I believe that is one of the reasons their shows sell out. I read testimonials on their web page, and time and time again an artist or patron commented, “people were not only there, but listening.” 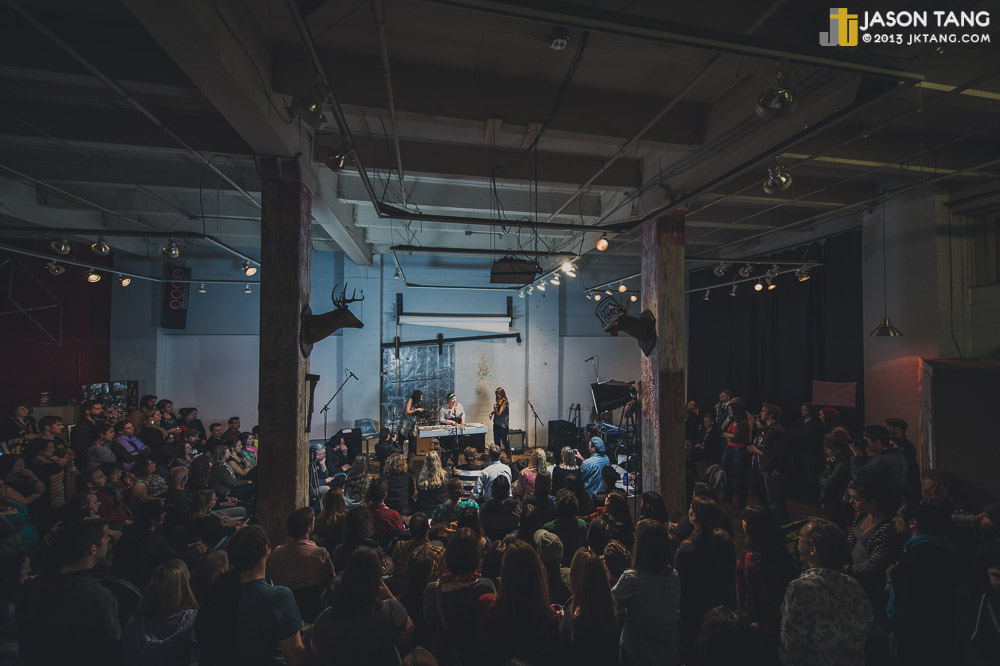 Be more like these fans respectfully watching and listening to Mary Lambert at a Seattle Living Room Show. (Photo: Jason Tang) 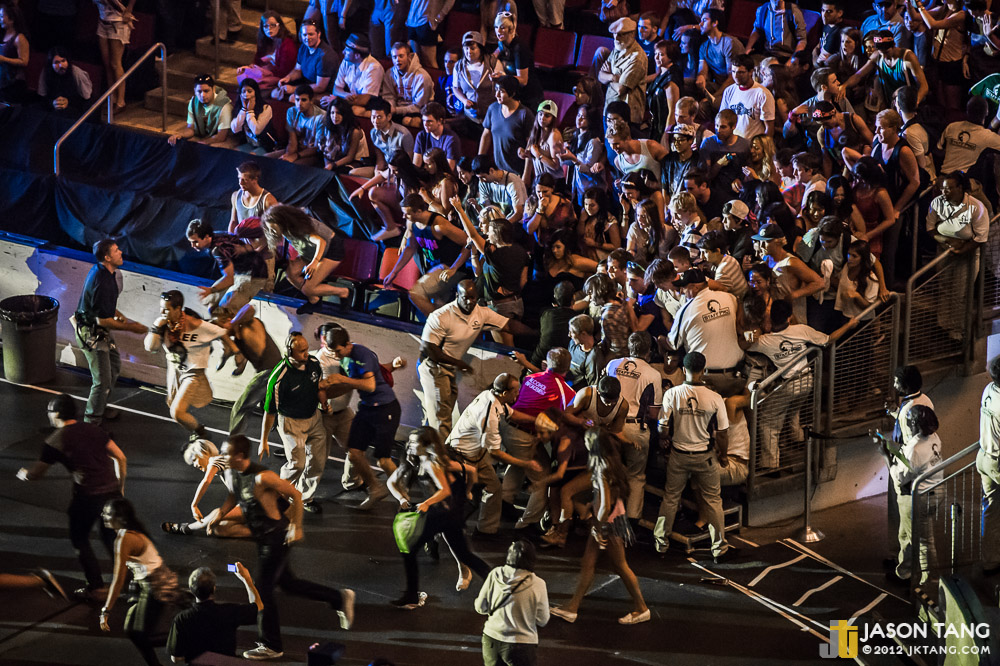 Don’t be like these disrespectful fans who bum-rushed KeyArena security at Bumbershoot after they stopped allowing people on the floor. (Photo: Jason Tang) 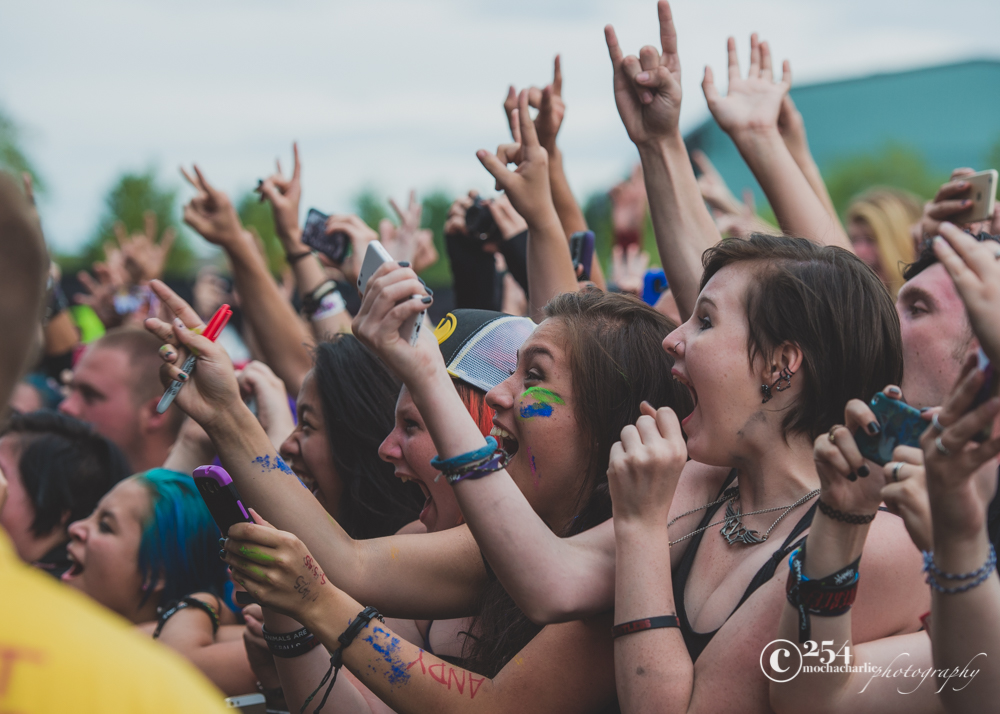 Be more like these Vans Warped Tour fans and experience a show in the moment. (Photo: Mocha Charlie) 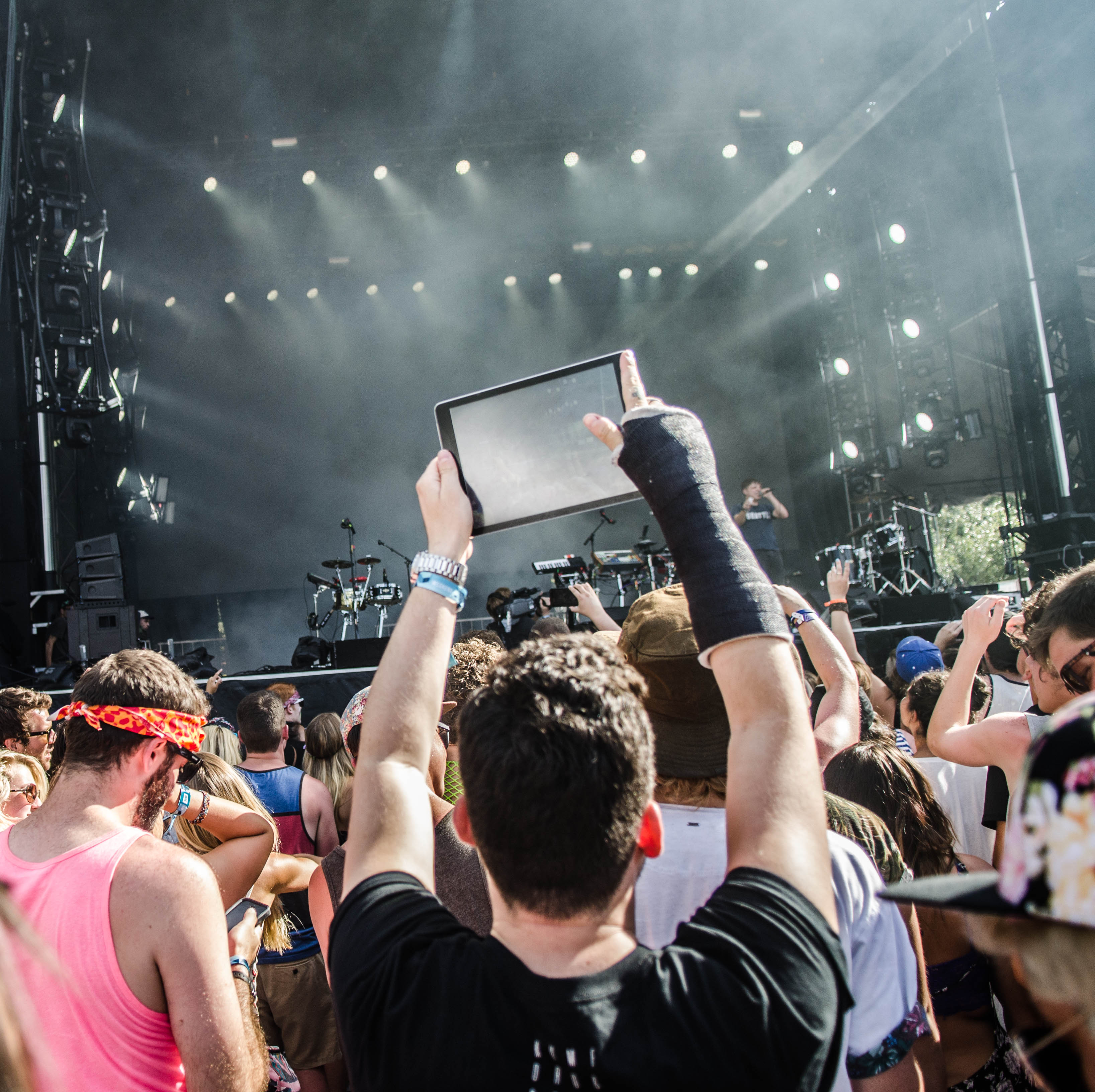 Don’t be that guy (taking photos with an iPad at a recent Robert Delong show). (Photo: David Endicott)

With clubs closing and declining show attendance, I challenge club owners to ponder the fan experience and what is lacking that might be keeping fans and their dollars away. Bid Farewell: Why Millennials Are Abandoning The Nightclub Nightlife published Oct 12 at www.insidermagazine.com, addresses this issue. It’s an interesting read as to the state of today’s audience.

Times are changing, and clubs must abandon old practices and take a hard look (before it’s too late) at their demographic, where they are spending their money, their hot buttons (ambience, food, drink specials, happy hours, special events, lights/sound, etc.), and move away from standard three- to four-bill shows. The article states that Millennials want an experience, and I believe it’s not just the Millennials who want more bang for their buck. Intimate chatting coves where patrons could drink and talk without the hustle-bustle of the main bar would be popular. The chatting needs to be taken out of the showroom, so if you don’t want them to leave, or be asked to leave, give them a dedicated, comfortable place to do it where they’ll continue to spend money, but without distracting other patrons who have paid good money for the music and don’t have to compete with the voice levels in the room.

Clubs, consider instituting a HOST for your shows. It might just be an employee who is great with people who can handle the duties or, like many comedy clubs, have a pre-recorded pre-show announcement made stating the rules. You can make it fun, use local celebrities, make it tongue-in cheek, but get the point across. You might tell them, “look around the room and note your nearest exit because if you’re disruptive, those are the exits we will be taking you out. See the big guy at the door? (he waves) He’s a professional tour guide who will be only too happy to personally show you the door.” Over the last few weeks, I read two separate Facebook posts about two of our top clubs who allowed a patron to verbally shout out and disrupt and disrespect an artist during her show, and nothing was done. Fans were put off, but this patron was allowed to stay in the room and continued to talk loudly during her set. That needs to stop.

I want to see the scene flourish, I myself have cut back on the amount of shows I go to for the very same reasons. I work hard all week and I’m tired when I get home. If I get myself all cleaned up, buy a ticket, drive into the city, pay for parking, dinner and drinks expecting to have a good time, I’m angry if someone ruins it.

We’re the City of Music, the world looks to us to set trends, not follow them. Let’s be progressive and start taking measures to bring back the Art of Being a Good Audience. I believe once we institute it, we’ll see a growth in attendance and other cities will follow suit, and it will become the new norm and everyone will benefit.

So, club owners, who will step up and give it a try?

Robin Fairbanks has spent 30+ years in the Music Industry in many capacities. Working in the Seattle music scene since 2006 as a Manager/Booker, she’s known for her ethics and artist development skills. Robin has guided the careers of many, but most notable as the former Manager of Seattle Garage/Blues band Fox and The Law for 3.5 years. Robin has spent the last 2 yrs consulting with Artists who seek her help as a Music Consultant and Publicist with Setlist Music Solutions LLC. She also gives of her time as an advisor to Seattle Wave Radio, an Internet music station where she helped shape its sound as the ROCK Channel Music Director for 2+ yrs upon its launch in 2010 and where you’ll find her music blog, “Bird On A Wire“. In 2014, Robin also worked as a Contributing Music Writer for Guerrilla Candy.
Related ItemsArlene BrownConcert EtiquetteDavid EndicottFeatureinside outJason TangMocha CharlieRobin Fairbanks
← Previous Story ‘The Narrow Valley’ Release with Bryan John Appleby and Friends
Next Story → Planes on Paper and Friends