Thunderpussy: Takin’ U Over

By Christine Mitchell on November 30, 2015@Housetornado37 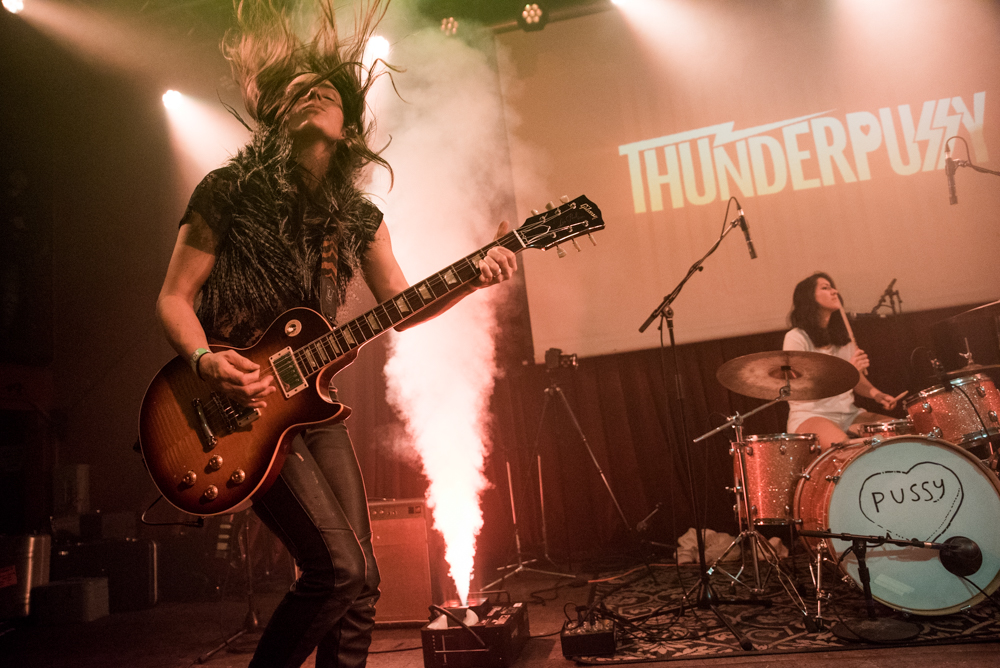 Seattle proved that it was thankful for local rock and roll by completely cramming into Neumos on Thanksgiving Eve for a stacked bill that included bod, Draemhouse, Nightmare Fortress, and Thunderpussy. Thunderpussy finished up their first West Coast tour back home at Capitol Hill with a show that proves them to be a juggernaut, with no signs of losing steam any time soon.

Speaking of steamy, the first three bands pre-heated the chilly interior of Neumos pretty quickly, starting with the self proclaimed “grungegaze” of bod. Draemhouse’s bluesy, smooth-as-silk rock seemed almost incongruous with their nu-metal sounding name, but this was a good thing. Their closing song “Woundlicker” was a good one, and their quirky lamps and Christmas lights under lace tablecloths brought a nice ambiance.

As Nightmare Fortress set up their banks of long LEDs, most of them pointed straight of the crowd, people started to murmur. Synth player Blair Field told everyone up front as the lights started to flash and the smoke machine began belching: “It’s going to get a lot, lot worse.” The band played its darkwave synthpop in smoky darkness punctuated with fierce strobes, and the audience began to dance. By the time Nightmare Fortress was finished, the crowd was warmed up plenty, and was primed and ready for Thunderpussy. The headliners took the stage to AC/DC’s “Thunderstruck.”

All it took was a look and a raised eyebrow from lead singer Molly Sides and the crowd exploded with cheers. When Sides started to dance, the venue lost its collective mind. Those who were newcomers to Thunderpussy and had been proclaiming their excitement at experiencing their first show, got their fill. This band pretty much owns Seattle rock right now, and they owned Neumos that night.

A large screen showed the band’s logo interspersed with video snippets of ’60s go-go dancers and spinning lucky Chinese cats. A couple of high tech smoke machine/light getups spewed at just the right moments. Dancers scrambled onto the stage for “Welcome to the Disco” and the eponymous “Thunderpussy,” much like when the band had last performed at Neumos for Capitol Hill Block Party, but better, because the room and the crowd was their own. Sides’ contortionist dance moves captivated everyone as she smoothly did the splits upside down and backwards, among other moves. Whitney Petty had her guitar god moves down pat, prowling across the stage and whipping her hair around as streams of smoke jetted all around her. Bassist Leah Julius exuded smug confidence, at one point losing her blouse and exposing her studded bra like it was no big thing, and all the while drummer Lena Simon kept time with a huge grin on her face as she watched her bandmates’ antics.

The music was undeniably great. Thunderpussy sounded tighter than ever, their full-on rock sound instantly as classic as their name is attention-grabbing. Sides’ voice is pure controlled power. When their debut album is finally released, it will be heard all over town, blasting out of cars and apartments. It is going to be a winner; these ladies are going for the gold. And they have a huge following cheering them on, demanding encores and supporting them in more ways than just post-set crowdsurfing. It’s time for the big time now. Let’s go, ladies. We’re all rooting for you.

Christine Mitchell has been poring over album liner notes pretty much since she acquired the skill of reading, and figured out the basic structure of rock songs at an early age. Whether it’s the needle popping into the first groove of the record, the beeps that signal the beginning (or end) of a cassette tape, or digital numbers ticking off the seconds from zero, music brings Christine happiness, ponderous thought, opportunities for almost scientific study, and sometimes a few tears. When she started attending live shows two decades ago, a whole new piece of the puzzle clicked in and she has been hooked ever since.
Related ItemsbodChristine MitchellDraemhouseFeatureNeumosNightmare FortressThunderpussy
← Previous Story Public Image Limited Returns After 20 Years
Next Story → DragonForce & Kamelot Bring Maximum Overload to Seattle