By Christine Mitchell on December 15, 2015@Housetornado37 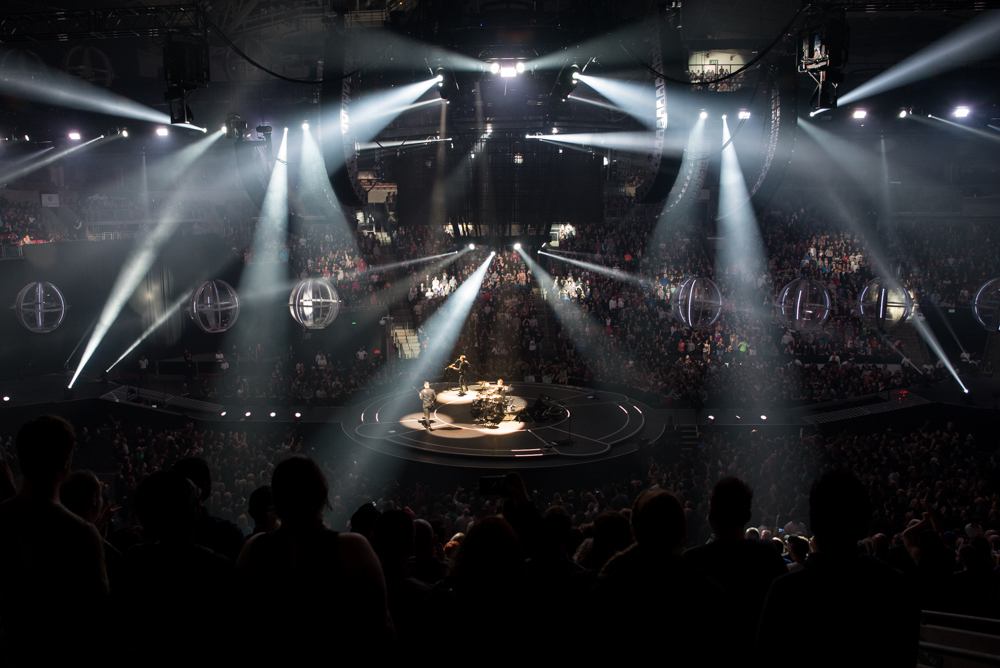 Fans of English band Muse were happily assaulted by drones at KeyArena last Saturday night – and for them, it was a very, very good thing. Every possible iteration of the word “drone” was exemplified during the show, performed in support of the band’s latest album, also (of course) titled Drones, the one exception possibly being that of a bee. But the packed arena quickly slipped into that role, the hive mind taking control and ensuring everyone’s rapt attention. Out of all of the shows that passed through Seattle in 2015, this one easily had the slickest, most mind-blowing production.

The stage ran the entire length of KeyArena’s floor, with a circular platform in the middle with auxillary stages joined by walkways on each end. NYC’s Phantogram kept squarely to the main area, yet made use of the racks of lighting and the wraparound screen above them to great effect. The surrounding stands were probably half-full for Phantogram’s set, likely because a number of Muse fans didn’t know who they were. Those who did, reveled in the band’s dreamy, electronic sound and lead singer/keyboardist Sarah Barthel’s beautiful voice. Barthel seemed rather shy; hiding her face behind her dyed, hanging head of hair and providing little banter between songs.

After a long intermission, Muse’s set started with an instrumental interlude over the loudspeakers (sans band). As an electronic chorus (“Drones”) filled the arena, orb-shaped drones began to drop down from the rafters and hover over the crowd, drifting about in a way that was beautiful, yet ominous, as they shone spotlights on those below. Muse appeared out of the darkness and began to play “Psycho” off of their album, Drones.

The amount of technology that went into the production of this, the Drones Tour, was simply incredible. From the upper level of the KeyArena one could spot technicians working at terminals directly above the stage, as well as herding the drones in and out of their spaces. Technicians could be seen inside the stage at the tunnels from which the band members emerged, and one can only imagine how many were swarming inside, making certain that guitars were tuned and that every light, projection, and drone did its job perfectly. A group of workers unloaded a dozen or so massive balloons filled with confetti out of a truck, and bounced them out into the crowd, where they were batted back and forth until they burst, spewing human-shaped confetti everywhere. A spaceship blimp took a tour around the arena, and the hive-mind collectively lost it. Projections of robot drones and hordes of bombs were shot onto massive curtains that would drop down nearly to stage level for certain songs. It was so, so much to take in that it was almost as if the music was there simply to support the visuals. But wait, weren’t we here to see Muse?

Yes! And there they were, down on the stage: Matt Bellamy falsettoing his brains out and attacking his guitar, Chris Wolstenholme stoically supporting with his vocal sand stolidly playing bass, and Dominic Howard providing percussion of various types, locked to his kit in the eye of the technological whirlwind. And, though they were tiny in the grand scheme of all that was going on, their sound filled the arena with massive force. The drums shook the joists as Bellamy’s voice reached the roof. He repeatedly ran the long, long length of the stage. And, beneath all of the hullaballoo above, Muse performed as a band, albeit a band whose stage had them almost always standing yards and yards away from each other. In the absence of being able to make a more personal connection with their fans, Muse did the next best thing, wowing them with amazing visuals and a set that included some deep cuts. The screams of joy when Muse trotted out “Knights of Cydonia” from 2006’s Black Holes and Revelations proved that Muse did indeed do what they set out to accomplish, even if it took nearly moving heaven and earth to do it.

Christine Mitchell has been poring over album liner notes pretty much since she acquired the skill of reading, and figured out the basic structure of rock songs at an early age. Whether it’s the needle popping into the first groove of the record, the beeps that signal the beginning (or end) of a cassette tape, or digital numbers ticking off the seconds from zero, music brings Christine happiness, ponderous thought, opportunities for almost scientific study, and sometimes a few tears. When she started attending live shows two decades ago, a whole new piece of the puzzle clicked in and she has been hooked ever since.
Related ItemsChristine MitchellFeatureKeyArenaMusePhantogram
← Previous Story Deck The Hall Ball rocks KeyArena
Next Story → Amid Band Member Shake-Ups, Mushroomhead Thrives On Tour