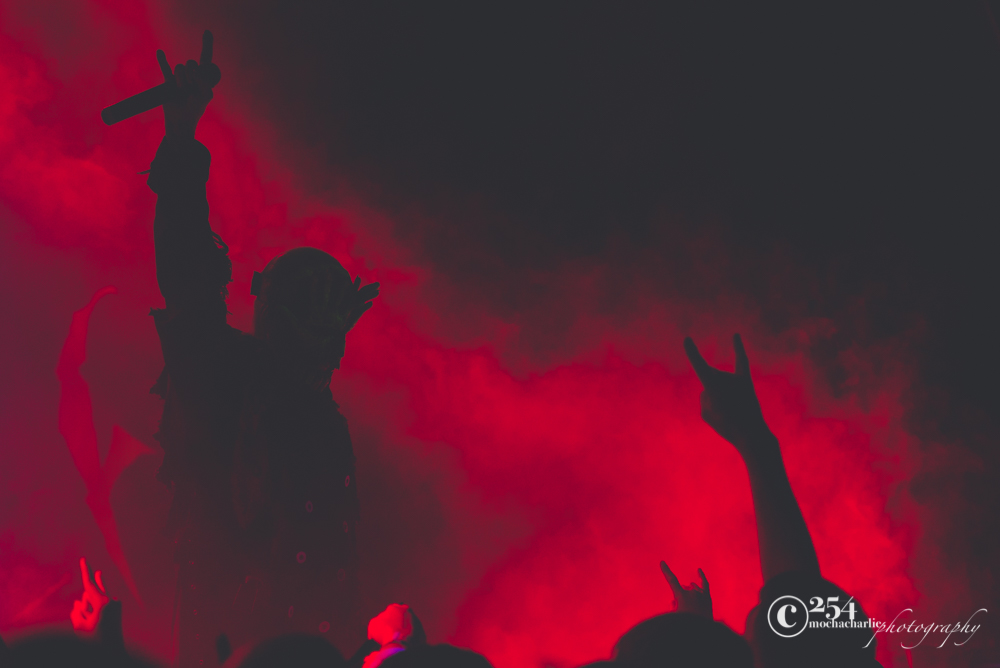 Fans, or “Shroomheads,” as they are commonly called, may never know the reasons why the recent exodus of members Waylon Reavis and Tom Shmitz happened, but Mushroomhead isn’t letting it keep them from touring, and diehard fans are flocking to see them perform. In fact, they’re continuing to add dates here and abroad well into 2016.

They may not have released an EP since 2014’s The Righteous & The Butterfly, but that isn’t stopping them from keeping their sets updated and current. They’re adding a few covers to their set, as well as their single, “Among The Crows,” from the Game of Thrones Mixtape Vol. II, and including back-up vocalist, Jackie LaPonza as part of their stage performance. She may be the only one not in a traditional mask on stage, but her presence is definitely a sight to behold. Her entrances are dramatic, and her performance yields a diverse interaction with those on stage, and with fans in the crowd.

Their show last week at Studio 7 was the perfect venue.  The crowd numbers may have been lackluster, but those who were there got a great performance, nonetheless. Openers American Wrecking Company (from Tacoma), Come And Rest (from Georgia), and 9 Electric (from LA) rounded out the bill, and all put on great energy sets.

Once Mushroomhead took the stage, fans were eager to see what and how they would perform with two fewer members. They didn’t miss a beat. They still had two sets of water drums on stage, and the vocals of Jeffrey Hatrix and Jason Popson were strong as ever. The only apparent difference on stage was the periodic absence of Rick “Stitch” Thomas from the front water drums, as he took on a heavier role on the sampling set up at the rear of the stage. Throughout their set, fans moshed, cheered, and found the band as exuberant as ever. Members even wore masks atop of their normal masks for part of the set. You only see your first Mushroomhead show once, and for those who have yet to do so, be sure to follow their progress as they evolve yet again. In their twenty years, this isn’t the first time they’ve had a band lineup change, and it may not be the last.  Just be assured that they will still give a fist-pumping, mosh-pit worthy show, no matter who’s on stage.

Mocha Charlie is an amazing photographer who has a real passion for music. She covers and shoots several shows per month in and around the region. She a brilliant photo journalist but most importantly, she is also a mother who does her best to balance out her life and live it to the fullest. Mocha Charlie uses her passion and talent to support the community, her friends and family any way that she can.
Related Items9 electricamerican wrecking companycome and restFeatureMocha CharlieMushroomheadStudio 7
← Previous Story Muse’s Drone Invasion
Next Story → A conversation with Silas Blak