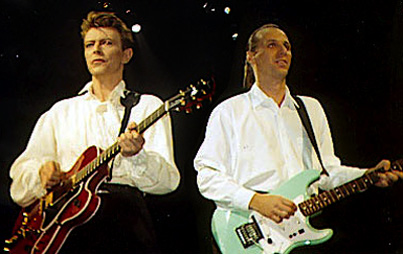 Like many music lovers, I was shocked and saddened by the untimely passing of one of the most important and complete artists of our generation, David Jones, AKA David Bowie. I had heard from others throughout the last few years that he had some health issues that prevented him from touring, but the fact that he was busy making records recently was encouraging. I was holding out hope of perhaps at least some one-off live performances or TV appearance, but unfortunately there was no earthly future for the “Star Man.” With his latest release, Blackstar, Bowie was just saying goodbye to us the only way he could, through his art – we just didn’t know it. He was one step ahead of us once again, turning his own death into performance art. Damn you, Bowie!

I think anyone that truly has a passion for, and knowledge of music knows how important Bowie was. The man wore many masks earlier on and seemed to reinvent himself, visually and artistically on an annual basis. Regardless of the persona that Bowie took on, be it Major Tom, Ziggy Stardust or the Thin White Duke, what was consistent was the quality of the music, the sound, the band and one of the smoothest voices across the Atlantic. Next to the Beatles, he was the most important artist to me, and had a huge influence on my own vocal style and songs when I recorded a few years back.

Although Elton John claimed to be the first white artist to appear on Soul Train in 1975, A slightly drunk Bowie did his thing on the show, performing “Fame,” the song he recorded with John Lennon and “Golden Years”. He wasn’t the first white solo artist to perform on the popular Saturday nationally televised music show, but his appearance was a significant event. Forty years later, it remains the stuff of legend.

David Bowie did not follow rock, pop or soul genres or styles, he created his own. Many tried to follow but could not keep up. In the ’80s there were a lot of great and successful outfits highly influenced by Bowie. Perhaps upon seeing their success in the MTV era, Bowie decided that he would jump in and take advantage of a visual medium that he helped create. After a ton of artistic and relative commercial success, it was time to put out something a little more accessible and make a little money in the process. Why not? Thus, Bowie came out with the highly commercially and artistically successful, Let’s Dance, and showed cats like INXS, Duran Duran, Spandau Ballet, ABC and the rest of that lot how it’s’ really done. If there ever was an artist who was the perfect prototype to help usher in the music video era in the early ’80s, and help a fledgling MTV reach critical mass, it was Bowie. Boom! Instant cross-over appeal.

Let’s Dance became one of the hottest records of 1983, and my own personal soundtrack that summer. The success of the record only whetted the appetites of new Bowie fans and thus, they went back to the record stores to pick up copies of tapes and discs from his back-catalogue. Seattle’s The Stranger art editor, music artist and big Bowie fan, Sean Nelson said it best when he stated in a recent tribute article, that Let’s Dance was a gateway drug. Indeed it was. It led many to get into Bowie’s “heavier stuff,” and after a few listens, their minds and lives were altered forever.

Some hardcore Bowie fans thought that Let’s Dance was a sell-out project. This long-time Bowie fan thought it was brilliant, a perfect balance of art and commerce. In fact, every song or little ditty that Bowie wrote and recorded was brilliant; it was just a matter of the degree of brilliance. Because you see, even what Bowie would consider mediocre work compared to his earlier masterpieces like Space Oddity, Hunky Dory, The Rise of Ziggy Stardust and the Spiders from Mars and Station to Station, to name a few, was still better than whatever anyone else was doing at the time. Bowie paved the way for other artists, like Madonna and Prince, to adopt new personas and reinvent themselves year-over-year in the popular and highly visual music world. Bowie gave us all permission and encouraged us to see, think, listen and paint outside musical lines. Moreover, he didn’t just breakdown social and artistic barriers, he ground them up, rolled it, smoked it and smiled.

Bowie was class and elegance personified. He had the best hair, the finest of suits, the best sound, the best cats in his band that could play and visually complement him. With that, he endeared himself to an audience that refused to have their art fed to them with a corporate spoon. Bowie and his band always looked cool, but that means nothing if you don’t deliver the goods musically, and Bowie did – for about half a century. To say Bowie was ahead of the curve is a gross understatement. It was more like this –  just when everyone else figured out the musical answers, he would change the questions. He was New Wave before the term was ever coined. Women wanted to be with him, some men wanted to be him, and some men wanted to be with him, as well. Personally, I loved his wit, curiosity, intelligence, impeccable style, his artistic courage, his inner strength, his musical genius, his multi-faceted vocal styling, and even his frugal business savvy. The attraction was not sexual, it was artistic and intellectual. For others, it may be have been one or all three.

I saw the “Serious Moonlight” Tour in 1993 in the Tacoma Dome. I also saw Bowie’s band Tin Machine at The Paramount on December 20, 1991. There was a significant juxtaposition between both shows. The latter was a glossy, slick, yet cool arena rock show. The Tin Machine show as stripped down, raw and edgy with Bowie content to serve as the front man for the rhythm section, consisting of the Hunt and Tony Sales and a guitarist whose licks could peel paint off the walls, Reeves Gabrels.

As mentioned earlier, one of the things that made Bowie’s records and live shows so good was the quality of the cats and producers he employed. Working with Bowie, kicked started many a producer or musician’s careeer. The list of brilliant musicians and producers that Bowie worked with is too long to list everyone but a few names that come to mind off the top are: Earl Slick, Carlos Alomar, Omar Hakim, Peter Frampton, Robert Fripp, Iggy Pop, Lou Reed, Mick Jagger, Ian Hunter and Mott The Hoople, Thomas Dolby, Stevie Ray Vaughn, Mick Ronson, Roger Powell, the late John Lennon and Luther Vandross, to producers extraordinaire, Nile Rodgers, Brian Eno, Tony Visconti and one of my favorite guitarists of all time, Adrian Belew.

Belew, who also toured with Frank Zappa, Talking Heads and King Crimson, played on Bowie’s “Heroes” tour in 1978. The recordings from the “Heroes” Tour were included in the double live album Stage, and contributed to Bowie’s next album, Lodger. Several years later, Belew returned to work with one of his musical heroes, taking the reigns as the musical director for the 1990 Sound+Vision Tour. Belew also played guitar and sang vocals on the tour.

Belew released a catchy track that Bowie wrote for him called “Pretty Pink Rose,” featuring Bowie on co-lead vocals. Throughout the number, Bowie and Belew trade lead vocal lines back and forth. You can hear it, and my past interview with the innovative guitarist, in the below SMI Radio XTRA. (Click Player Below). Adrian spoke to me via Skype and he shared his thoughts on working with one of the most influential and original artists of our lifetime.

David Bowie was fully immersed in his art to the very end. He had many personas throughout his artistic journey but he ended up back home to being who he always was, David Jones. He walked his own path, he played and marched to his own beat and played by his own rules. His art is who he was. To know this truth, one only needs to listen to his last gift he gave to us, Blackstar, and the prophetic and hauntingly beautiful video, “Lazarus.” Upon second thought, perhaps Mr. Bowie has some more music magic to share with us in the future from beyond the grave. With David Jones Bowie being the consummate music /performance artist and all, well, you just never really know, do you?

Not only is he a multi-media journalist, he is also an accomplished musician. He is the founder of SMI and drives the creative look, feel and branding for the publication. His years of writing, arranging, and performing live music in a variety of genres inform his ability to communicate the message and the mechanics of music. Roth’s work on SMI reflects his philosophy that music is the universal language, and builds community. He believes it has the power to unite people of every race, religion, gender, and persuasion.
Related ItemsAdrian BelewDavid BowieFeatureGreg RothSMI Radio
← Previous Story SMI Radio: The BGP Live in Studio (Videos)
Next Story → Fox and the Law Tags Out; Acid Tongue Keeps On