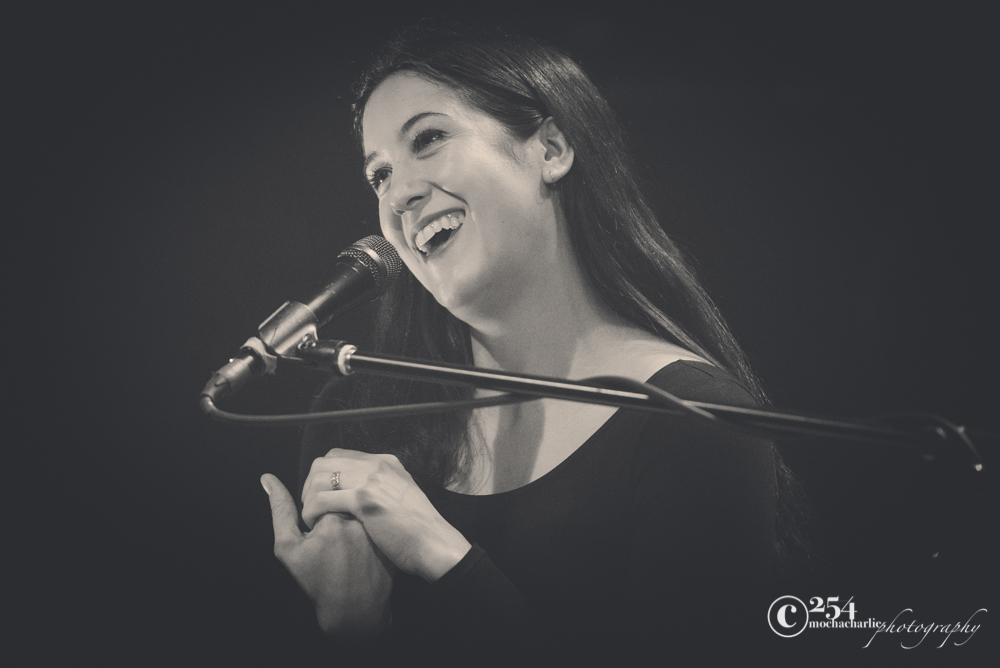 “I know we’re in a bar, but do you mind if I talk to you like we’re in a coffee shop having espresso and a cookie”?  Vanessa Carlton asked the crowd, obviously comfortable on stage, and excited to return to Seattle after quite a few years hiatus. She is currently on the second leg of her US tour, promoting the release of her 5th studio album, Liberman, and made a stop at Ballard’s Tractor Tavern over the weekend.

Fans arrived early, and were treated to singer/songwriter opener, Skye Steele. Leaving his home in NYC, (where he used to play his “fiddle” in the subways), he’s been on on the road, on multiple tours, and has been touring pretty consecutively since March ’15, promoting his current EP, Up From The Bitterroot. He plays solo sets, creating loops with vocals, his guitar, tambourine and violin. His set included a David Bowie cover of “Free Your Heart,” along with his own original songs. He also joined Carlton on stage, monitoring computer tracks, adding guitar loops, hitting external beats, singing background vocals and playing violin on many songs. Carlton met Steele back in 2007, and they have played on and off again over the years. They work well together on stage, taking cues from one another throughout the performance.

Carlton told stories about how much joy she is brought by being able to continue to make music, after starting at such a young age. She refused to dedicate a song to one of her teachers at the School of American Ballet, but reflected as to how her time spent there helped to make her a person who would be driven to succeed. She asked the question, “Who could have guessed that a 16 year-old who skipped class to write, “A Thousand Miles,” would still be playing music today?” She began her set by dedicating her first song of the evening, “White Houses,” (her chart-topping single off her second CD, Harmonium) to her brother, and then went on to play songs off her new CD, what she calls the “meat of the sandwich” part of her set.

A fan in the crowd referred to her new music as a bit dark. Perhaps that’s relative to somber sounding piano notes, eerie “oohs & ahhs” strategically placed here and there, but Carlton seemed excited, and smiled bright throughout the set. She stayed true to her solo piano bridges and long vocal pauses she’s known for on many prior tracks.

Liberman, is a very personal album. The album itself was named after her grandfather. Traditionally trained as an artist, he had painted a large, particular piece of artwork that she was drawn to while writing some of her songs, referring to it as kind of “psychedelic” in nature. She wanted to honor her family’s artistic history by choosing the name of her grandfather for the album title. Her song, “Willows,” was influenced by the many weeping willow trees around Pennsylvania where she grew up. She referred to her writing style for the album as being written in, “collage form.” She took bits and pieces of numerous ideas, and formed stories, until she had enough words and ideas for each song, drawing personal feelings, experiences, and moments from her life, bringing out one cohesive idea to life. “House of Seven Swords,” was inspired by a deck of tarot cards she had on hand, that when she looked up translations about a card that stood out, it meant “a custom built life.”  For her, it meant, “painting your house the color you want, and living your life the way you want to lead it. She wrote the entire song in about 30 minutes. She says every two years, she can write a song like that.

She is living the life she wants. Family is her priority, and if she couldn’t prove to herself that she could tour with her husband, one year old, and long-haired wiener dog, it wasn’t going to work. This tour started in October and everything has gone wonderfully. She loves being able to bring her family on tour, and play in front of her fans.

Unfortunately, her keyboard (referring to it as her “elephant”), which she had for 10 years, died on stage the first night of this leg of the tour in Vancouver, so she was getting used to a new keyboard. She concluded her set with her mega-hit, “A Thousand Miles,” off of her debut CD, Be Not Nobody, which sold over two million copies worldwide. She then motioned to the crowd nd said, “Pretend we left the stage, you clap, and now we’re back for the encore.” She ended her set with her song, “The Marching Line,” (from Rabbits on The Run), dedicating it to those who lost their lives in the attacks on Paris.

She wanted to end the show a bit early so she could meet as many fans that were willing to stay, to sign cd’s etc., after the show because she hadn’t been here for so long. Fans lined up, not quite for a thousand miles.

Mocha Charlie is an amazing photographer who has a real passion for music. She covers and shoots several shows per month in and around the region. She a brilliant photo journalist but most importantly, she is also a mother who does her best to balance out her life and live it to the fullest. Mocha Charlie uses her passion and talent to support the community, her friends and family any way that she can.
Related ItemsFeatureMocha Charlieskye steeleTractor Tavernvanessa carlton
← Previous Story LP Review: DBUK – Songs One Through Eight
Next Story → Windowpane Celebrates Album Release at Iconic Showbox