By Christine Mitchell on February 18, 2016@Housetornado37 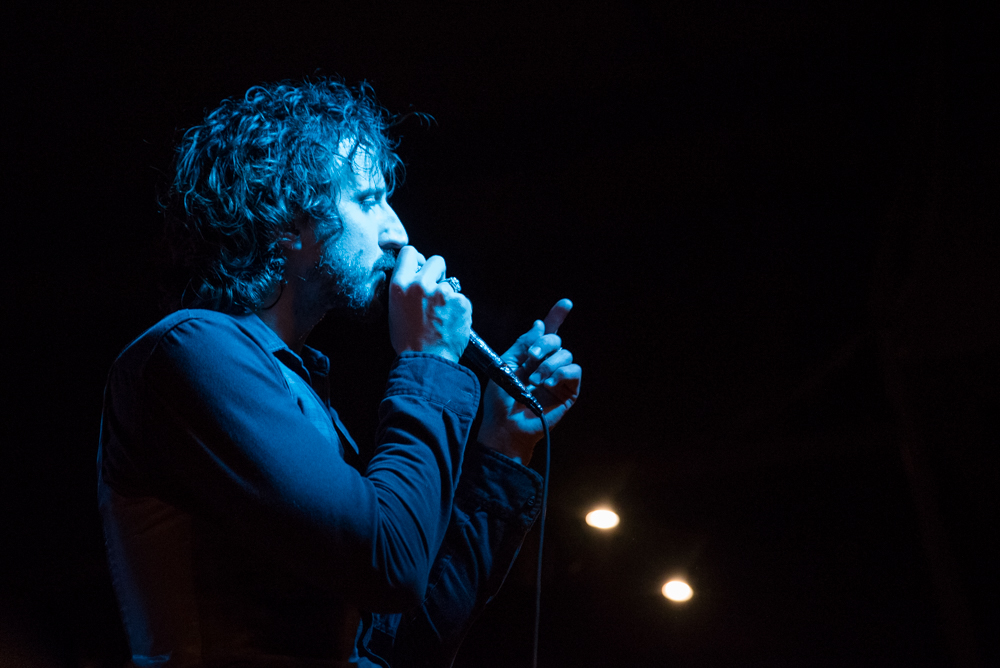 Everett Music Initiative showcased a great lineup of mostly local bands at Tony V’s Garage last Friday in Everett for Crystal Desert’s EP release show, and the cherry on top was Portland’s hard rocking Battleme. Crystal Desert, The Moon Is Flat, and Johnny Lee Ledford may have been playing support to Battleme, but each of these three bands played strong sets of their own as the Everett scene continues to make headway.

Ledford started the night off with a retro look and more than a dollop of Bowie homage. He pulled off this interesting panache of an image smoothly, with the guitar chops to back it up. The band has been getting progressively more confident, stronger sounding, and tighter with each gig they play. Bassist Blake Lewis and drummer Thys Ferwerda may not dress the part as Ledford does, but their musical support is solid. It’s no surprise that they will be heading to SXSW this year, and it won’t be a surprise to find them on the bill for the upcoming Fisherman’s Village Music Festival.

Kirk Rutherford‘s latest outfit, The Moon Is Flat, expands on what worked best in his previous band, Shark The Herald: dirgey, psychedelic, building jams. Their soundcheck even seemed to morph into part of their set, with ambient noises waxing and waning, with the band members playing sounds off of one another. Rutherford is the unassuming focal point, standing front and center, eyes downcast. Yet, as he fed off of the growing energy of each song, he became animated, attacking his guitar and thrashing his head, lost in the music. Fringe from his DIY poncho was flying everywhere. The Moon Is Flat had gathered a decent sized crowd by the end of their set, and they were swinging their heads as well. This is another band that shows consistent improvement each time they perform; it’s going to be interesting to see what comes out of their current recording sessions.

Crystal Desert’s new EP, What is Crystal Desert?, is snotty, punky, and great. Punky, but the three songs all clock in at over four minutes, which lends a whole other dimension to the music. The songs fold and bend through several movements like a sort of mini-opera. Crystal Desert’s fans were definitely in full force as the venue filled up for their set. The band’s live show added yet another layer to the package as all three members gave an energetic performance. Ryan Alexander contorted himself in ways that would result in a sprained ankle in most other people, and his vocal delivery varied between nasal sneers and throat-searing screams. Alexander hunched protectively around his guitar even as he would throw his body to the floor with it. Drummer Josh Ihler‘s face was obscured by a mass of curly hair as he furiously played, and bassist Christian Smith kept things anchored even as he, too, rocked out. It was truly a great performance, and yeah, we will be seeing more of these guys in the future, too.

The one strange thing about the night was that once Crystal Desert’s set was over, people seemed to evaporate. Which was unfortunate, because Battleme put on an exceptional performance, and it was one that people will most likely not see again. Frontman Matt Drenik had broken his guitar the night before while playing in Seattle, so he was left simply manning the mic. This resulted in a completely different experience for concertgoers. Those who’ve seen Battleme previously, are probably familiar with how frenetic Drenik is on stage with his guitar. Being freed of that instrument brought his showmanship to epic levels as he commanded the stage. He jumped, danced, grooved,  and swung his mic relentlessly, all with an insane amount of swagger. Those that stayed behind for Battleme had quite a treat. They were serenaded. They shared conversation with the band. The whole thing was sort of crazy in a wonderful way. Lead guitarist JJ Eliot played like a veteran guitar god; heck, all of the band members played all out, sounding at times like live MC5 or Stooges. There was definitely a sense of disappointment at the less than stellar attendance, but Battleme funneled this into pure rock energy and gave back one hundredfold to those present. Pick up a copy of their new album, Habitual Love Songs to catch an inkling of what it was like. But honestly, you had to be there. And lucky you if you were.

Christine Mitchell has been poring over album liner notes pretty much since she acquired the skill of reading, and figured out the basic structure of rock songs at an early age. Whether it’s the needle popping into the first groove of the record, the beeps that signal the beginning (or end) of a cassette tape, or digital numbers ticking off the seconds from zero, music brings Christine happiness, ponderous thought, opportunities for almost scientific study, and sometimes a few tears. When she started attending live shows two decades ago, a whole new piece of the puzzle clicked in and she has been hooked ever since.
Related ItemsBattlemeChristine MitchellCrystal DesertEverett Music InitiativeFeatureJohnny Lee LedfordThe Moon Is Flattony v's
← Previous Story Nu Era gives us ‘Armadilla Lexus’
Next Story → Whiskey Syndicate: Slide Guitar Ride