By Kriston McConnell on March 16, 2016@Kristonisms 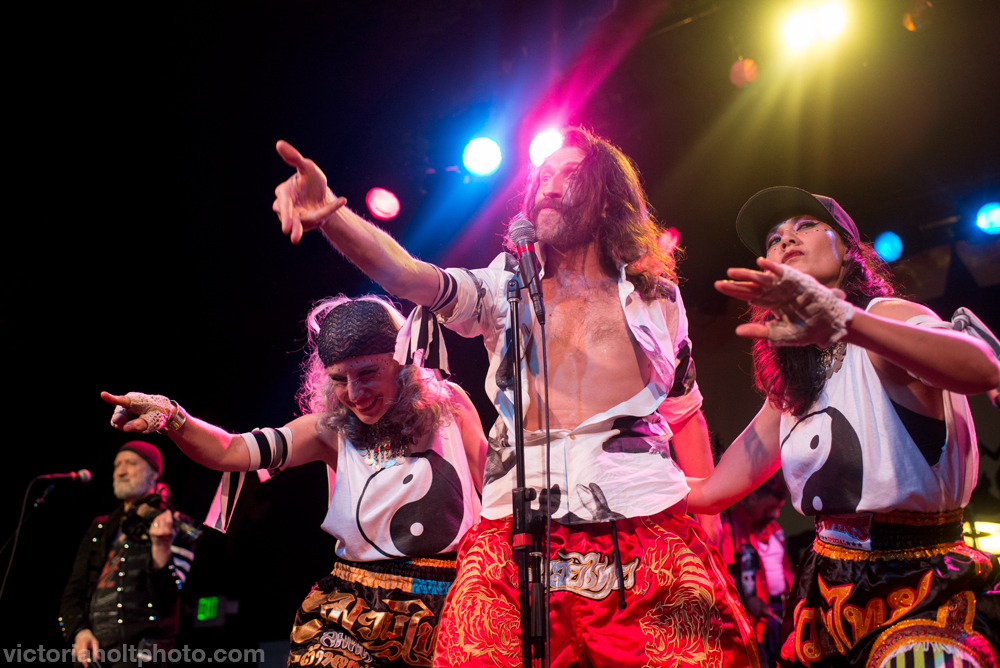 Gypsy punk rockers Gogol Bordello are continuing the celebration of the 10th anniversary of their album Gypsy Punks: Underdog World Strike by embarking on a month long headlining tour across the US. The band is known for their energetic stage antics, and there is no reason to believe this anniversary tour will be any different. Of their first three performances on this tour, two of them took place at Seattle’s popular Showbox venue. Both nights were completely sold out, and we had the opportunity to check them out live on Monday, March 14.

For the first few dates of the tour, Gogol Bordello enlisted the support of southern California surf rock quartet Pounded By The Surf. The musicians looked more like cowboys than surfers, but that didn’t stop them from filling the venue with that surf rock reverb that California is famous for. Pounded By The Surf stick with the more classic surf rock sound, and do not include any vocals in their music. A song that stood out in particular was one they dedicated to “those who wear socks to the beach.” The song, titled “Beach Cholo,” had a playful, upbeat tempo to it that invoked some pretty hilarious visuals after the dedication by the band. Their songs amped up the audience for the highly anticipated arrival of the night’s headliner.

After a solid performance by the opening act, it was time for Gogol Bordello to hit the stage. The anticipation was palpable – these guys are famous for their performances, and fans knew things would get crazy before the night was over. They weren’t wrong. As soon as Gogol Bordello made their way to the stage they instantly dialed it up to 11. From their wacky outfits to launching a bouquet of flowers from a slingshot made using one of the member’s legs – there was no shortage of entertainment at any given moment. It’s mind boggling to think that this band can put on a 90+ minute set like this nearly every night for an entire month. Where can we get some of that energy?

A show wouldn’t be as fun if the band only performed the album and then just left. In addition to the album tracks, the band included a few fan favorites and incorporated some of them into the encore. None of the songs were in order, so it wasn’t entirely predictable what they would be performing next. That kept fans on their toes, and supplied them with surprises here and there throughout the set. That kept the energy high, and caused fans to become even more excited when the heard the first few notes of their favorite songs explode from the instruments.

Gogol Bordello orchestrated 90 minutes of relentless, unapologetic punk rock. Their performance was as much of a punk rock show as it was a theatrical performance. Every move was exaggerated and intentional – every note was timed just right. Many times throughout the performance there were as many as nine people on stage. Organized chaos are the only words that can describe the evening. It would be an unforgettable show for any fan, new or old, and they should definitely find the time to see them while on this tour. It will be worth every minute.

Kriston began her writing career as a passionate music fan. She attended dozens of shows, purchased CDs, vinyl and even cassette tapes of artists she barely even heard of. Shortly after joining a band's street team she happened to meet blogger Jacob Tender (now with Alternative Press) who asked her to write for his blog. After a couple of months he joined the staff of Under The Gun Review, and brought her along for the ride. After spending four years as a major contributor to the publication she moved on to be a web content contributor for New Noise Magazine, whose print magazines have a national reach.
Related ItemsFeatureGogol BordelloKriston McConnellThe ShowboxVictoria Holt
← Previous Story Ben Rector & Marc Scibilia Land Brand New Tour in Seattle
Next Story → The Smashing Pumpkins’ Stunning Acoustic-Electric Evening