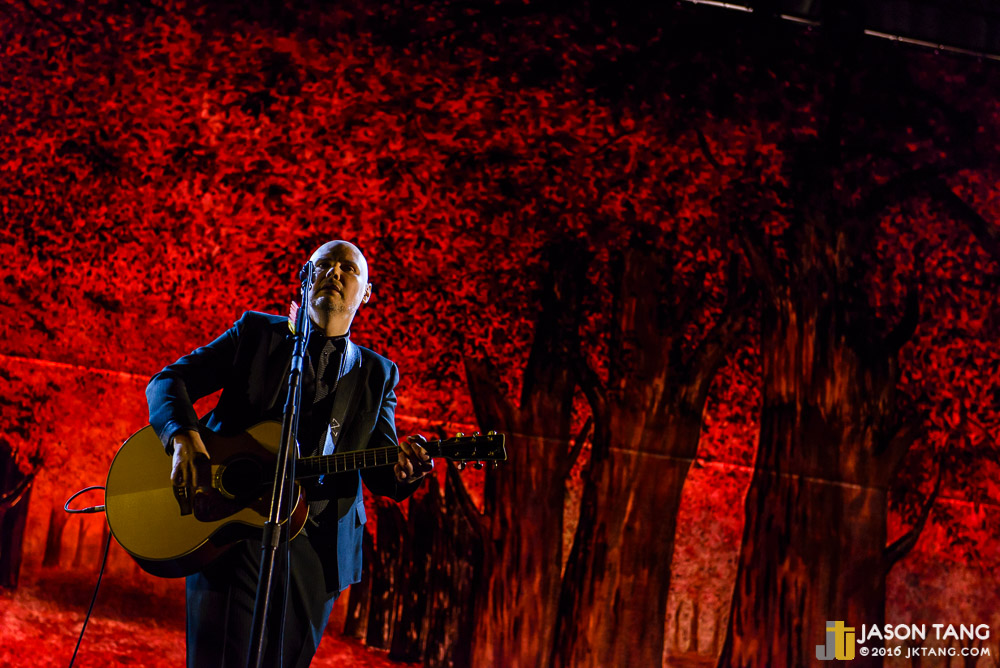 The Smashing Pumpkins at The Paramount Theatre (Photo: Jason Tang)

Billy Corgan took the stage Wednesday night at The Paramount Theatre armed with only an acoustic guitar and a visually stunning red backdrop. Opening with a relatively new number, “Cardinal Rule”, The Smashing Pumpkins‘ frontman performed a handful of songs solo before bringing out guitarist Jeff Schroeder. The duet then played a few numbers, including a beautiful David Bowie cover of “Space Oddity”. About a quarter of the way through the set, Corgan announced that they had reached the part of the show where they focused on a particular album (Siamese Dream), which he dubbed “The Siamese Suite”. At this point he brought out the rest of the band, which included drummer Jimmy Chamberlin, guitarist/bassist Katie Cole, and keyboardist Sierra Swan.

A continuation of the “In Plainsong Tour” from last year, the band’s 2+ hour acoustic-electric evening explored their deep catalog including crowd favorites (“Today”, “Disarm”, “1979”), covers (“Space Oddity”, Imbruglia‘s “Identify”, Hole‘s “Malibu”, The Stones‘ “Angie”), and just about everything in between. Corgan even managed to get some digs in on Pearl Jam (when he asked “Didn’t they do an unplugged thing once?”) and Hole (speaking about “Malibu” which he largely co-wrote) throughout the night.

Opening the night was another 90’s favorite, singer-songwriter Liz Phair, who hasn’t toured since 2010 but seemed quite at home, performing a mix of old and new songs during her 45 minute solo set.

Jason Tang is a well respected concert photographer in Northwest. Not only does he shoot all of the top Northwest shows and festivals such as Bumbershoot, Capitol Hill Block Party and City Arts Fest, but he also lends his talents to our partners Melodic Caring Project and Seattle Living Room Shows. Jason’s great eye and solid technical acumen make him one of the best and most respected photographers in the region. Because of his stunning photo work and professional reputation, Jason has been requested by name to shoot artists such as Allen Stone and Star Anna. Jason is well thought of within the concert photographer community and is always willing to lend a hand and provide tips to newer concert photographers.
Related ItemsFeatureJason TangJeff SchroederJimmy ChamberlinKatie ColeLiz PhairSierra SwanThe Paramount TheatreThe Smashing Pumpkins
← Previous Story Gogol Bordello Bring Gypsy Punk to The Showbox
Next Story → Thunderpussy Parties Hard at the Sunset Tavern on St. Patrick’s Day