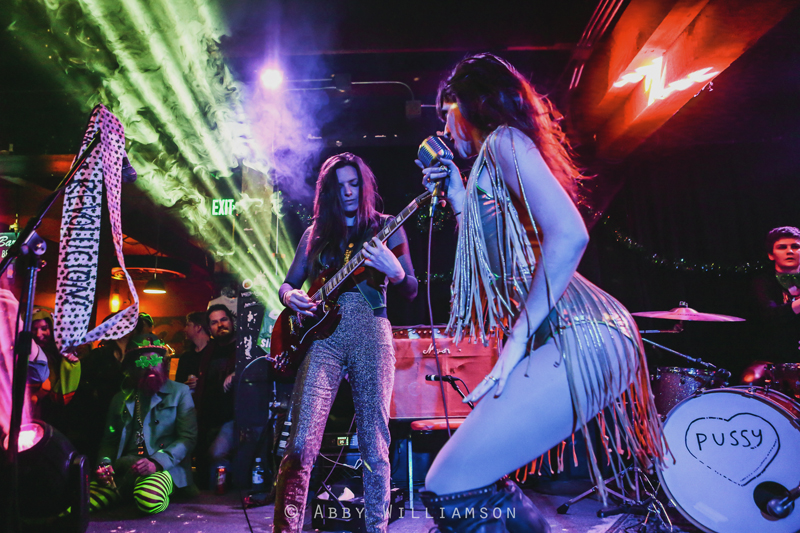 As if St. Patricks Day wasn’t already enough of an occasion filled with drunken debauchery, Thunderpussy took it to a whole new level with night one of their two-night stint at the Sunset Tavern. On this night, Newaxeyes and Constant Lovers provided support – in definitely more ways than one.

Newaxeyes was up first – with can only be described as sonic chaos – basically the soundtrack to a post-apocalyptic art film. Some might call it noise rock, but it’s more precise than that. Armed with tables of pedals and drum machines, Bret Gardin, Tyler Coray, William Hayes, and Jordan Rundle smack you in the face with sounds so eerie and perplexing that you’re put off at first, then confused, then mesmerized.

In between sets, a man adorned in all neon green and gold – like a leprechaun on acid – swung around a scepter with a box of Lucky Charms attached at on top. Needless to say, there was more cereal on the floor than in people’s mouths. Whoever was in charge of cleaning that night had quite a task on their hands.

Constant Lovers took the stage next, with their trippy thrashy punk rock. They were a completely different sound from Newaxeyes, but equally as specific. Some songs spoke to Seattle’s grunge roots, but some felt dirty in other ways, if you know what I mean. It felt like vocalist Joel Cuplin was trying to start a riot with his mic, his shirt, his saxophone, and the audience all at once. His writhing and raucous presence demanded your full attention. It was like, “hey you! Listen to me when I’m talking to you!”

As people tried to catch more cereal, Cuplin came back up on stage with his saxophone to lead on the ladies of Thunderpussy, and the crowd went mental. Frontwoman Molly Sides took the stage incognito – donning a blonde wig and sunglasses, while the rest of the girls came on, guns blazing. Glitter, fringe, gold lamé catsuits, and bejeweled bras – all staples of a Thunderpussy show – were ever present. And it was even more so on that night, since a lot of people in the crowd were dressed up too.

Thunderpussy played all their greatest hits, which is weird to say seeing that they’ve only been a band for a short few years, but a supergroup is a supergroup, no matter how small. “Welcome to the Disco,” “Fever,” and the band’s theme song were highlights, proving that even a young band can play like they’ve been doing it for decades. A great cover of The Beatles “Helter Skelter” was a welcome surprise, with guitarist Whitney Petty shredding as hard as the original.

This band is a true example that sexy is empowering. Sure, people are writhing all over each other and licking boots and occasionally getting naked (more on that in a minute), but none of that cheapens their music – because they don’t let it. It’s powerful in-your-face rock and roll created by a bunch of badass women.

About the getting naked part – right as Thunderpussy busted into their last song – the theme song – one of the guys from the opening bands – who shall remain nameless – screamed “I’m gonna get naked!” And he got up on stage, took off his pants, and went Full Monty. It goes without saying that most of those photos won’t see the light of the Internet.

Abby Williamson is a photographer, writer, and video blogger with a passion for live music – especially the local scene. She recently moved to Seattle after commuting from Gig Harbor for shows an average of once a week for five years, so she’s happy to not have to drive as much and photograph even more concerts! When she’s not elbowing her way up to the front row at a show or sorting through thousands of photos of those shows, Abby also does freelance wedding photography, all the while cultivating a decent-sized following on YouTube. Abby has contributed to several music blogs over the last five years (and she’s really excited to join the SMI team!), and has been published in at least one album booklet for the band, Someone Still Loves You Boris Yeltsin. She would like people to know that while music photography and writing is a huge passion in her life – she is a fan first, photographer second.
Related ItemsAbby WilliamsonConcertsconstant loversFeatureLocal ArtistLocal Musicmolly sidenewaxeyesSunset TavernThunderpussyWhitney Petty
← Previous Story The Smashing Pumpkins’ Stunning Acoustic-Electric Evening
Next Story → Thunderpussy Night Two: Electric Boogaloo