By Christine Mitchell on March 27, 2016@Housetornado37 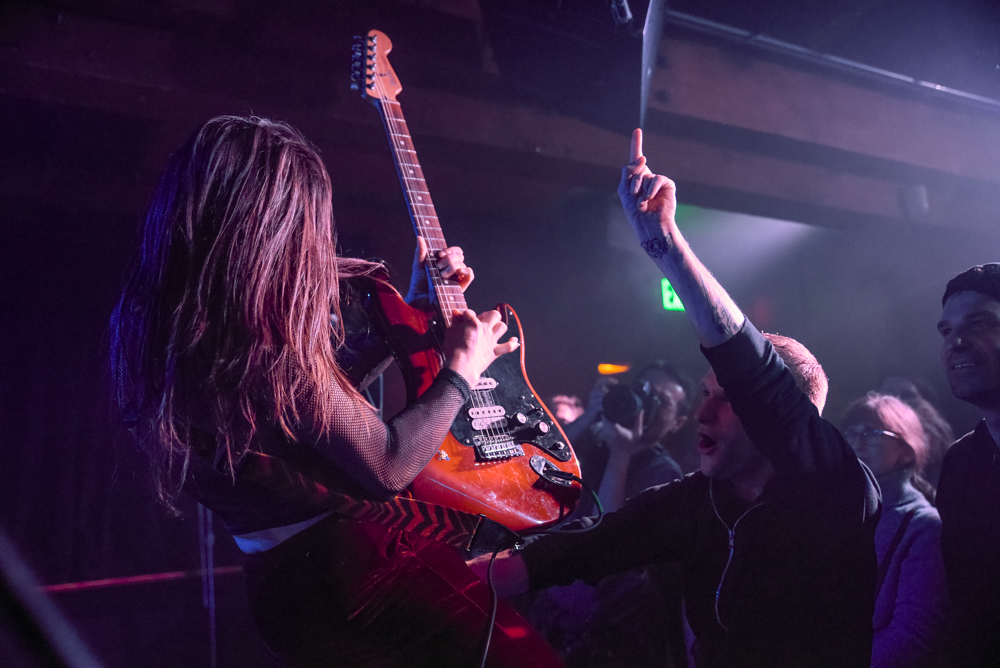 What does a band do after playing an energetic, shenanigans-laden, sold out show on St. Patrick’s Day, the most drunken night of the year? Many would finish their set and return home spent, needing to recharge their batteries, patting each other’s backs for a job well done.

Night number two of back to back sets at the Sunset Tavern may not have featured a hairy, be-tutu-ed leprechaun. It may not have sported full frontal nudity or guitar whipping. But make no mistake: Thunderpussy isn’t about to let the title of Best Ticket In Town get away from them, and their second sold out show in as many nights served to remind everyone in attendance of that fact.

Pale Noise played their opening set swathed in pale blue light. Their sound was that of pure, guilt-free pop-rock, their love songs peppered with throwback keyboard work reminiscent of “96 Tears” at times. The band seemed surprised to even be there, but judging by their music they had every right to be.

The show was ostensibly a celebration of the release of Maszer’s debut EP, Dreamsz. Here is a little advice: If you have the chance to see Maszer: DO IT. Their hard, tribal sound pounded through the room, enrapturing everyone it touched. Maszer’s sound is highly reliant on multiple layers of percussion, with up to three band members drumming in various ways (there was even a bucket!). Katie Blackstock’s vocal lent a sultry air to the slightly psychedelic music and projection on the screen behind the band, but when guitarist/vocalist STITCX sang in Hebrew on several tracks, the music became transcendent. Its hard edge is softened with a Middle Eastern sounding influence, and there really isn’t another band around that sounds like Maszer. Another interesting note is that the CD version of Dreamsz has four tracks, plus a bonus track cut onto the CD’s surface that can be played on a record player…yes, Maszer is that cool.

At this point, at least one fan was wondering how Thunderpussy could outdo Maszer’s intense set. That same fan soon realized that there was nothing to worry about. Here’s the thing: underneath the schlock that goes part-and-parcel with every Thunderpussy show is the underpinnings of incredibly solid rock and roll songs being played by talented musicians. Frontwoman Molly Sides’ voice doesn’t have to be accompanied by her impeccably executed and explosively suggestive dance moves: it is an impressive standalone instrument. Whitney Petty and Leah Julius play their respective guitar and bass parts with confidence and precision; they don’t have to fling their hair or roll around on the floor. And for every song rife with sexual innuendoes there is a song about living with dementia (“Stuck”) or ruminating on a society glued to social media (“Taking You Over”). The dancing and mesh shirts, the sequinned bras and thigh high boots…those are just the cherries on top of an expertly devised cake. So, although there were no Chambongs and no boot-licking, Thunderpussy delivered.

Those who would dismiss Thunderpussy for using sex to sell anything are simply not paying attention. These women love to perform, and the performance aspect (one person said it has a Barbarella feel to it) is so tongue in cheek that it would probably get the most stodgy person to crack a grin. Sides and Petty and Julius (along with drummer Ruby Dunphy) were all smiles all night long. Of course Thunderpussy could play their set like any regular old band, but what is the fun in that? Besides, as Nigel Tufnel says in This Is Spinal Tap, “What’s wrong with being sexy?” Thunderpussy answers that with a firm “Nothing”. Sex positivity and rock and roll never felt and sounded so good.

The next chance to see these ladies in action is at SASQUATCH!, on the Main Stage, no less. If you’re not in the mood to travel so far, you can also find them this July at Capitol Hill Block Party. Thunderpussy has also been recording here and there, so be on the lookout as a release may be on the horizon. And with every song sounding as strong as ever, it’s going to be one for the ages.

Christine Mitchell has been poring over album liner notes pretty much since she acquired the skill of reading, and figured out the basic structure of rock songs at an early age. Whether it’s the needle popping into the first groove of the record, the beeps that signal the beginning (or end) of a cassette tape, or digital numbers ticking off the seconds from zero, music brings Christine happiness, ponderous thought, opportunities for almost scientific study, and sometimes a few tears. When she started attending live shows two decades ago, a whole new piece of the puzzle clicked in and she has been hooked ever since.
Related ItemsChristine MitchellFeatureLeah JuliusMaszerMolly SidesPale NoiseThe Sunset TavernThunderpussyWhitney Petty
← Previous Story Thunderpussy Parties Hard at the Sunset Tavern on St. Patrick’s Day
Next Story → Knockout at Neumos on Fight For Something Tour