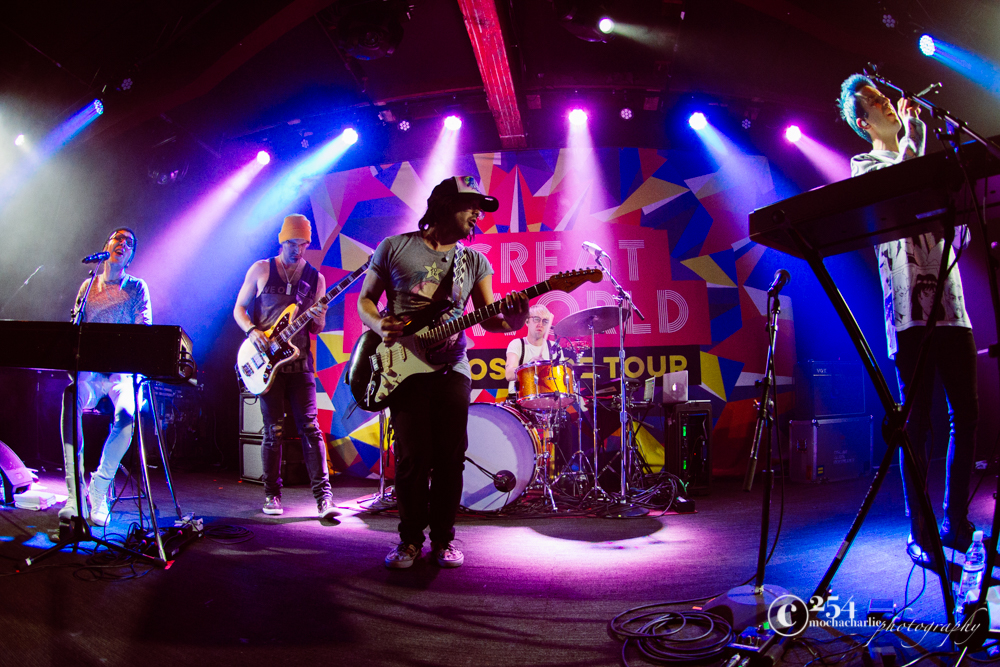 A Great Big World at The Crocodile (Photo by Mocha Charlie)

When A Great Big World last performed here in Seattle in October 2012, they were just beginning to culminate into what we see & hear today. Ian Axel and Chad King had been writing partners for years prior, but all of their music was simply produced under Axel’s name until that year.

As time went on, their popularity grew (with help of song placements in various media formats), and in 2013 they signed to Epic Records. The band released its first full length EP, Is There Anybody Out There, in 2014. It provided a new platform to highlight both songs that the pair had written strictly for Axel, as well as new songs that were more “duet” style, and songs that highlighted more of King’s vocals. In 2015 they were awarded a Grammy for their mega-hit, “Say Something.”

AGBW continued to write and perform live shows here and there, but it wasn’t until their sophomore EP, When The Morning Comes, was released in late 2015 that they began to make way for their first headlining tour, Kaleidoscope. With more than two dozen dates on the tour they finally chose to include Seattle as one of their stops, and fans lined up early last weekend at The Crocodile to see what they had held back for so long. For the tour, they also included meet and greet packages which included an acoustic performance. On Saturday, they performed both, “Shorty Don’t Wait” and “Say Something” for the VIP’s.

The night started off with a set by local band The Requisite, that did a great job of warming the room up. The crowd gave an enthusiastic response to the group’s poppy-yet-driven sound. Frontman Maxwell Royce sang and perfromed fervently, alternately singing into the mic passionately and slinging his hair from side to side. Royce ended the band’s set on his knees, digging into his guitar strings to the roar of a room full of new fans. Word has it that The Requisite is in the midst of recording some new songs, and you can expect to see them around town again very soon.

A Great Big World chose Chicago native Genevieve for support during the tour, and she performed various songs from her catalog, including those from her debut EP, Show Your Colors. Her attitude on stage is one of thankfulness. She was simply full of smiles and exuded a pleasant demeanor throughout. Her songs are full of self inspiration and history, and the lyrics include many events that she experienced growing up. She shared her soul on stage, and the crowd embraced her from the start. Previously a lead vocalist for Chicago-based band Company Of Thieves (2007-2014), Genevieve began her solo career in when the band split. With the success of this tour she is making many new fans of her own, on her terms, with her music.

Once A Great Big World took the stage, it was a non-stop sing-a-long dance party. Fans were simply in awe that they were finally able to see a band they had waited to see again so long, or in many cases for the first time. In 2012, AGBW performed in the basement of The Fremont Abbey, opening for long time friend, Greg Holden in a room not even close to full capacity. That show was all ages, and there were only a handful of fans under 21. As for Saturday night’s show, it too was all ages, and both the main floor and balcony of The Crocodile were nearly full, with the under 21 crowd filling a great portion of their designated areas. Axel & King were inspired by the welcome the crowd gave and how they responded to each and every song. Their bandmates complimented the two frontmen, and definitely had fun performing together. One of their songs, “One Step Ahead,” was written and performed for Axel’s fiancé when he proposed. She happened to be in town for their Seattle show, and Axel mentioned how hard it was to sing it when she was there due to the emotional memories evoked. It was flawless and beautiful. The band noted that they have big plans for 2016. They have finally completed writing a musical (no production date as of yet), and they have more shows lined up after this current tour leg. It’s a great big world out there, and they are on track to make it theirs.

If you missed AGBW this time around, they will be returning to Seattle this summer as a part of The Woodland Park Zoo’s concert series (ZooTunes) opening up for Phillip Phillips & Matt Nathanson. Tickets are available here.

Mocha Charlie is an amazing photographer who has a real passion for music. She covers and shoots several shows per month in and around the region. She a brilliant photo journalist but most importantly, she is also a mother who does her best to balance out her life and live it to the fullest. Mocha Charlie uses her passion and talent to support the community, her friends and family any way that she can.
Related ItemsA Great Big WorldFeatureGenevieveMocha CharlieThe CrocodileThe Requisite
← Previous Story Knockout at Neumos on Fight For Something Tour
Next Story → Pure Power Pop with Rachel Platten and Co.