Daughter Brings The Showbox to Tears 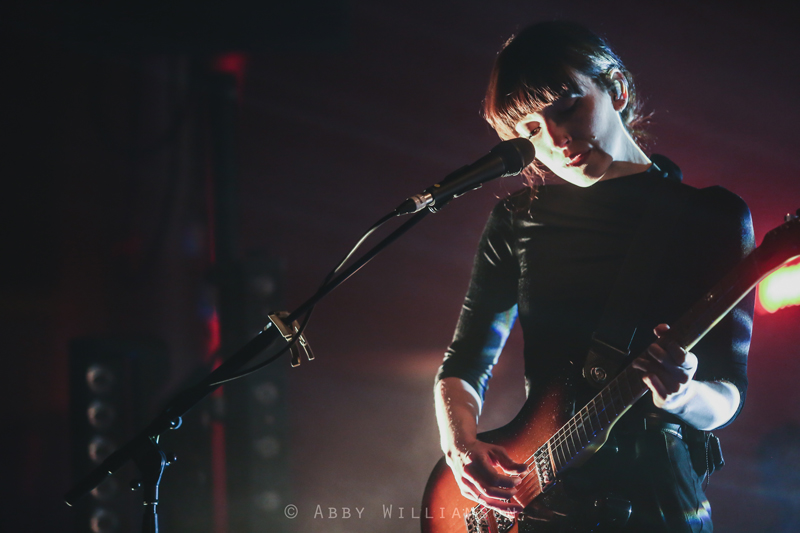 Daughter at The Showbox (Photo by Abby Williamson)

It’s not often one goes into a concert accepting the fact that they’re going to cry, but when it comes to Daughter, there’s no fighting the tearful urge.

Let’s back up for a minute.

New York’s own Wilsen opened that night’s show at The Showbox with their subtle and dreamy songs. Singer Tamsin Wilson’s unobtrusive vocals paired with the modest wall of sound was mesmerizing, to say the least. They played tracks off their first Magnolia EP, as well as a smattering of songs, including the haunting “Centipede,” off their forthcoming debut full-length. It was so moody and beautiful that at least half of the crowd had their eyes closed at some point. It’s not a bad way to experience music. If you close your eyes, your senses aren’t distracted by the visuals, so that way you’re solely focused on what you’re sensing aurally. At least that’s what science says.

The room was thoroughly warmed up, and had readied themselves for the emotional rollercoaster that was to follow. Daughter took the stage, bathed in moody backlighting, and burst into “How” the lead track off their triumphant sophomore LP Not To Disappear. Somehow the Showbox felt much larger than usual – whether that was due to the beams of white light coming from the back of the stage or the ambient reverb burying its way into everyone’s soul.

Front woman Elena Tonra’s plaintive voice lends itself so well to the heart-racing soundscapes that she and the rest of her band creates. It’s surprising how much sound and emotion can come out of this band when they appear so serene when they’re performing. They’re up on stage and all one can think is “what is this sorcery?”

It was a perfect mix of new and old songs; there was even a deep cut from their Wild Youth EP, “Home,” which instantly excited the whole room, as most people weren’t expecting to hear it. Though it wasn’t until “Winter” and “Smother,” both off 2013’s If You Leave, that you could feel everyone in the room start to break. At least that’s when I lost it, along with my friend standing next to me. First she put her hand around my back to comfort me, and then I put mine around her shoulder (she’s considerably shorter than I am). At the exact same moment, we brought our arms down to hold hands and cry together. And that’s exactly what we did.

Enough about my emotions.

Daughter concluded the show with “Fossa” pre-encore, and mirroring the record, came back out to close with “Made of Stone.” It was beautiful. It was emotional. It was painful, in the positive sense. It’s the kind of pain that needs to be felt for it to truly run its course. That’s what Daughter’s music does – it makes you feel stuff, and it makes you feel it really hard.

Encore:
Made Of Stone

Abby Williamson is a photographer, writer, and video blogger with a passion for live music – especially the local scene. She recently moved to Seattle after commuting from Gig Harbor for shows an average of once a week for five years, so she’s happy to not have to drive as much and photograph even more concerts! When she’s not elbowing her way up to the front row at a show or sorting through thousands of photos of those shows, Abby also does freelance wedding photography, all the while cultivating a decent-sized following on YouTube. Abby has contributed to several music blogs over the last five years (and she’s really excited to join the SMI team!), and has been published in at least one album booklet for the band, Someone Still Loves You Boris Yeltsin. She would like people to know that while music photography and writing is a huge passion in her life – she is a fan first, photographer second.
Related ItemsAbby Williamsonconcert reviewConcertsdaughterelena tonraFeatureShowboxShowbox at the Marketwilsen
← Previous Story Pure Power Pop with Rachel Platten and Co.
Next Story → Underoath Dazzle Fans In Showbox SoDo Performance