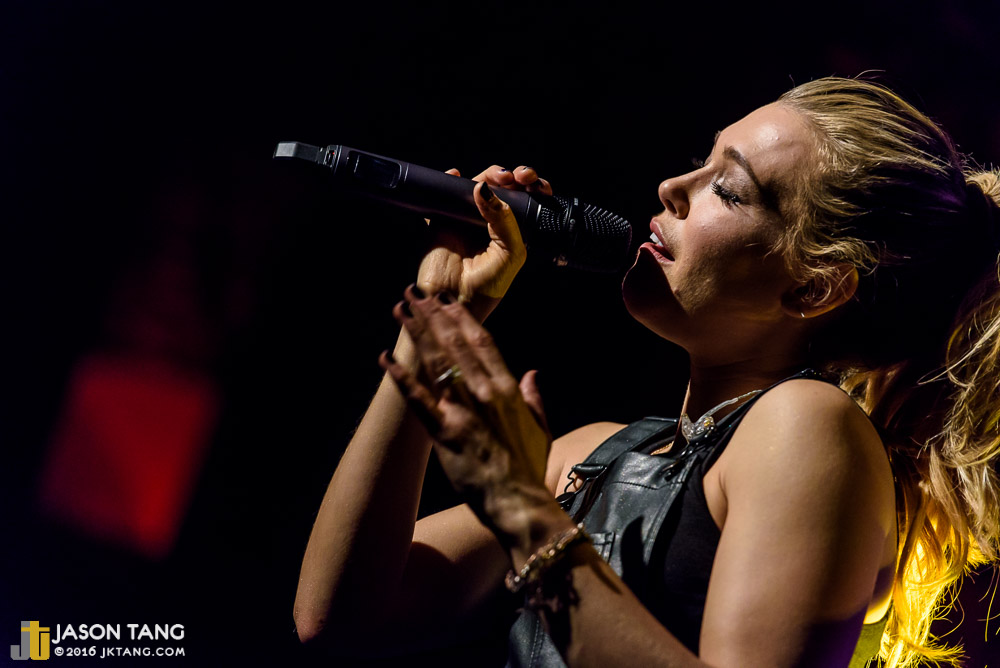 Rachel Platten performs at The Showbox on March 30, 2016. (Photo by Jason Tang / jktang.com)

She may have taken a slower boat to pop stardom than her chart-topping compatriots, but at this point, there’s no denying Rachel Platten’s ubuiquitous tunes. When a presidential candidate plays your “Fight Song” as their entry processional, you’re pretty much guaranteed a spot in the pop canon. Add to that a super likeable stage presence and multi-instrumental talent and it’s pretty hard to hate on Platten for finally having her breakthrough moment, even if it came by way of overtly cliché lyrical output. Platten stopped by Seattle’s Showbox Theatre midway through her Wildfire Tour with special guest Eric Hutchinson and opener Hunter Hunted for a family-friendly night of well-crafted pop goodness that was also being live-streamed by Melodic Caring Project to share the proven healing properties of music with hospitalized kids.

California proves its way with perfect sunny-day music via Hunter Hunted, who have the formula down in spades. The duo hit the stage in matching white workwear jumpsuits – backed by the Jurassic Park theme song – and delivered a perfectly arranged 6-song set of their melodic pop confections. Dan Chang and Michael Garner have a way with a harmony, their vocals meeting in the middle to form a smooth central focus. While the lyrics aren’t all flowers and candy, the songs maintain a mostly upbeat feel with ridiculously catchy hooks.

The guys have an adorable stage presence, are super sweet, and have the softest t-shirts in town. Trust me, once you hit play on their 2015 debut album Ready For You, you won’t be able to turn it off. It’s a flawlessly-produced mix of dance, rock, and 90s magic that feels completely now and incredibly lasting. Their delivery, sharing a mic, for “I Want You Back,” an acoustic ukulele track written in the car, won cutest musical moment of the night. While the crowd didn’t seem very familiar with their music, I’m sure there are plenty who are tuning in now.

Up next, Eric Hutchinson made a show of it in his standard turquoise suit and striped T, accompanied by a stellar three-piece backing band. Hutchinson is hard to peg, swapping soulful piano-rock for Americana-laced blues at the drop of a dime, but the crowd was with him right off the bat. As soon as he kicked off his set with “Love Like You” the crowd was clapping along with no encouragement. Hutchinson kept up a steady stream of witty banter between delivery of hit after hit.

On multiple occasions, Hutchinson would synch up with his backing guitar and bass players for some dance moves, lending a festive feel to the show and keeping the audience moving with them. His music is a little bit soul, a little bit jam band, a lot of vocal prowess. He threw in a short cover of Taylor Swift’s “Shake it Off” that had everyone singing and dancing before closing with “Forever” during which he had the audience light up their phones like a spotlight so he could sing from the floor.

And then finally, against a completely darkened room, purple spotlights sweeping over the crowd, the night’s headliner, Rachel Platten, graced the stage. She kicked things off with power ballad “Beating Me Up,” immediately showing off her genuine stage presence. After the first track, the lights raised in the room and she asked everyone “put your hands in the air” before grabbing a guitar and noting, “Oh my god, there’s so many of you!” There were many moments throughout the show where her humility and appreciation of the crowd were apparent and appreciated.

A classically-trained pianist who jumped from the keys to multiple guitars, to pure vocals, Platten is somewhere between Katy Perry and Kelly Clarkson, a slight twang slipping into her Northeastern roots and her LA vibe. Her slick black overalls, crop top and silver ankle boots perfectly topped with a big blonde ponytail and giant smile, Platten is a 34-year-old pop star who seems to be coming from a genuine place. For “Better Place” she explained how it was written for her sister when she found the person she was going to marry, and the crowd swayed and sang along, a lot of love in the room. Playing off of that, she took a stool at the front of the stage, accompanied by only an acoustic guitarist for a cover of Justin Bieber’s “Love Yourself.” Best part? She ends the song with an eye-opening beatbox, completely erasing any unmemorability from the moment.

With a crowd full of youngsters and plenty of apparent family members, the night was pretty clean-cut – Platten reminded herself at one point not to swear – and clearly this crowd knew her record front-to-back. She only played a couple of older songs, keeping the vibe current with tracks from her 2016 album Wildfire, and mostly upbeat. Though her encore did include a cover of Swedish House Mafia’s “Don’t You Worry Child” that turned into a major party before she completely shut down the night with “Fight Song.”

The Rachel Platten tour continues through the summer, make sure not to miss a great, all-ages-friendly affair.

Eric Hutchinson Set List:
Love Like You
Watching You Watch Him
Tell The World
You Don’t Have to Believe Me
Rock & Roll
OK, It’s Alright With Me
Anyone Who Knows Me
A Little More/Shake It Off (Taylor Swift cover)
Forever

Hunter Hunted Set List:
Operating
Ghost
Ready For You
Blindside
I Want You Back
Keep Together