By Christine Mitchell on April 5, 2016@Housetornado37 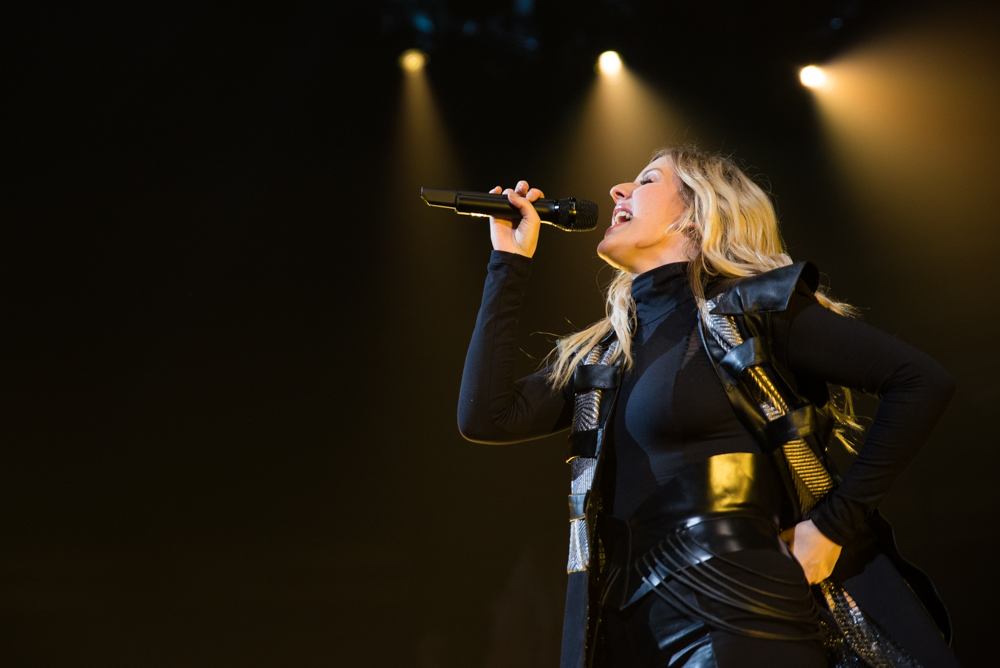 At one point during Ellie Goulding’s set at KeyArena last Saturday, she explained her special connection to the Pacific Northwest. When the Brit visited the States for the first time that she came here first. Which is why she decided to start her current Delirium World Tour in the upper left USA (with one previous show in Vancouver, BC). When she asked the fans if they’d be willing to adopt her as one of their own, the resulting roar affirmed that yes, Seattle would keep Ellie Goulding in a heartbeat.

Playing KeyArena was a huge step up from Goulding’s last tour stop at The Paramount Theatre, although she did grace the Main Stage last fall at Bumbershoot to a large, festival-going crowd. The Key was still mostly full, with folks of all ages filling the GA floor to seats high up in the rafters. Goulding’s stage setup took advantage of this larger setting, with geometric video screens and large swaths of fabric that served to screen Goulding’s initial appearance and doubled as stage decorations. Visuals synced up to every beat of the night, along with four male dancers who punctuated various hits, wearing outfits to match the video footage.

Goulding started her set off with “Aftertaste” from Delirium. As she and her dancers twirled in time to the music, Goulding’s leathery-metallic jacket flaps flying, the crowd became delirious itself. What followed was an emotional, musical rollercoaster, from the acoustic ballad “Lights” (with lights from phones liberally peppered across the arena crowd) to the all-out dance party during her cover of Calvin Harris’ “Outside.” Goulding’s outfits reflected the ups and downs, with a shimmery white gown complementing the slower part of the night and leather shorts and black bodysuit making dancing easy during upbeat numbers. Goulding’s voice also had a shimmer to it, and it was nice to hear her range without layers of vocal effects piled on. Goulding can sing. All in all, the crowd drank Goulding’s performance in through every pore of their being…they really loved her, and she truly seemed to reciprocate that feeling.

New Zealand’s BROODS brought their electropop in as a warmup. Their name describes their familial, brother-sister relationship, but brooding was also an apt description of their tone as lead singer Georgia Nott cracked nary a smile. Their lighting highlighted Nott’s severe hairstyle and sharp features as she moved like a well-oiled, programmed machine. Their new single, “Free” was just released, and it is probable that with this prime spot opening for Ellie Goulding, this tour will help to propel them into the spotlight.

Christine Mitchell has been poring over album liner notes pretty much since she acquired the skill of reading, and figured out the basic structure of rock songs at an early age. Whether it’s the needle popping into the first groove of the record, the beeps that signal the beginning (or end) of a cassette tape, or digital numbers ticking off the seconds from zero, music brings Christine happiness, ponderous thought, opportunities for almost scientific study, and sometimes a few tears. When she started attending live shows two decades ago, a whole new piece of the puzzle clicked in and she has been hooked ever since.
Related ItemsBroodsChristine MitchellEllie GouldingFeatureKeyArena
← Previous Story Joanna Newsom: Paramount Poetry
Next Story → Dude York Takes 5 at Chop Suey