By Christine Mitchell on April 10, 2016@Housetornado37 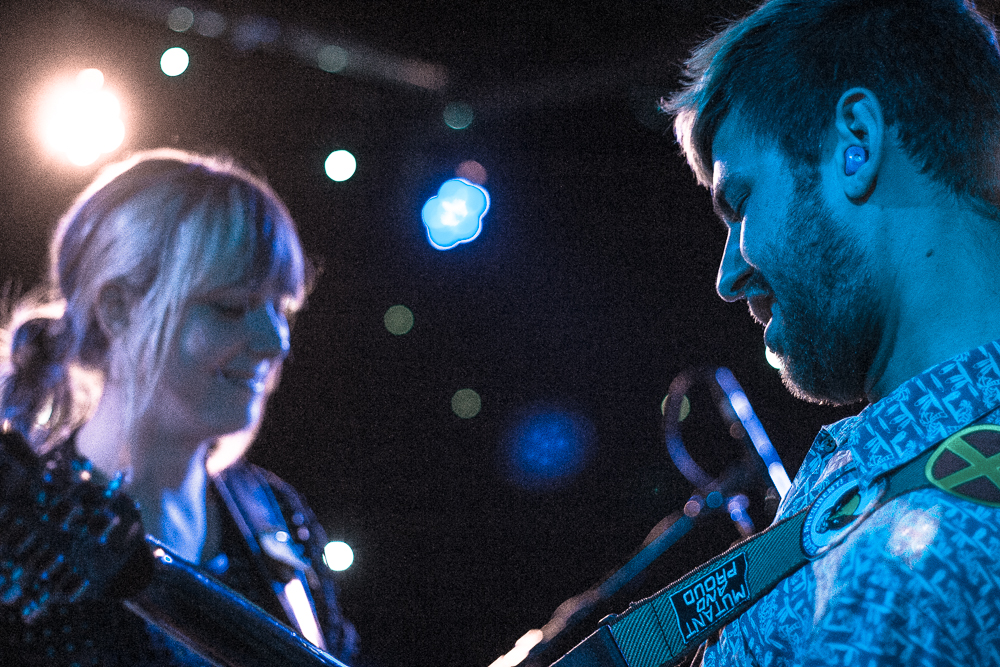 The all ages set came in full force to Capitol Hill’s Chop Suey for a rocking bill that included Everett’s Fauna Shade and Seattle’s own Naked Giants, and Dude York, who were ending a recent tour by performing at home. It was a night of fun and weirdness that included a trench coat, an animal print scarf, and several Costco-sized boxes of Take 5 candy bars.

Fauna Shade’s reverb-drenched, trippy rock may contain a surfy sixties girl-group vibe, but Scotty Smith’s ragged vocal shivers and wildly rolling eyes shatter any attempts to romanticize the music. Their performance was hazy and creepy with a hard edge. That isn’t to say that it was super serious. Smith and his compatriots bassist Derek Johnston and drummer Richie Owen exchanged smiles with each other and the crowd throughout the set, and Smith’s devil-may-care attitude and full length trench coat laid a layer of farce over it all. Their new EP Floral Hall is an excellent snapshot of Fauna Shade in their element, and the single “No Nostalgia” is, simply put, great.

If Fauna Shade seemed to be having a good time, Naked Giants definitely had a GREAT time. During their set, the band danced and head-banged, the audience danced and head-banged, and it was all due to Naked Giants’ fast, fun, loud, and thundering tunes. The band played every single song as though it was the crowning moment of their performance, which was amazing to see on the very first song, and insane to continue experiencing until the last. Drummer Henry Lavallee may be one of the only drummers you’ll see that can canvas the entire stage without missing a beat on his kit. Bassist Gianni Aiello thrashed around incessantly and constantly had to fiddle with his pedal board as he kept knocking out cables (he eventually ditched his pedals completely, deciding to focus more on the thrashing side of things). Grant Mullen pulled great guitar faces as his hair fuzzed out all around him. The music was a bit Ramone-y, a bit metal, and a lot party, and it was enthralling.

Dude York’s set was a good way to come down from the high of Naked Giants. The band immediately laid its nerd-cred card on the table by questioning the crowd as to whether anyone had a peanut allergy. Everyone was duly warned about the impending peanutty end to the night, and Dude York was free to begin playing. The band’s sound seems to be a loving homage to all things nineties: Nirvana, Sonic Youth, dissonance mixed with sweetness. Guitarist Peter Richards and bassist Claire England traded vocal duties and songs through the course of the set, a happy collaboration that shined as the two met in the middle of the stage during solos and bridges. It didn’t have the craziness of tourmates Naked Giants’ performance, but Dude York’s music doesn’t call for the same measure of excess. That being said, the night ended in a tangly freight train of guitar solos. Richards began to scream into the microphone randomly while taking video selfies with his smartphone as Mullen from Naked Giants grabbed Richards’ guitar and began doing mean things to it. Aiello brought out the Take 5 bars and chucked them by the handful out into the crowd, and Richards chucked himself into the crowd as well, surfing and screaming with abandon. This is it, kids. This is rock and roll. Learn it well.

Christine Mitchell has been poring over album liner notes pretty much since she acquired the skill of reading, and figured out the basic structure of rock songs at an early age. Whether it’s the needle popping into the first groove of the record, the beeps that signal the beginning (or end) of a cassette tape, or digital numbers ticking off the seconds from zero, music brings Christine happiness, ponderous thought, opportunities for almost scientific study, and sometimes a few tears. When she started attending live shows two decades ago, a whole new piece of the puzzle clicked in and she has been hooked ever since.
Related ItemsChop SueyChristine MitchellDude YorkFauna ShadeFeatureJake HansonNaked Giants
← Previous Story Ellie Goulding Rising
Next Story → Welcome Home, Hey Marseilles