By Christine Mitchell on April 15, 2016@Housetornado37 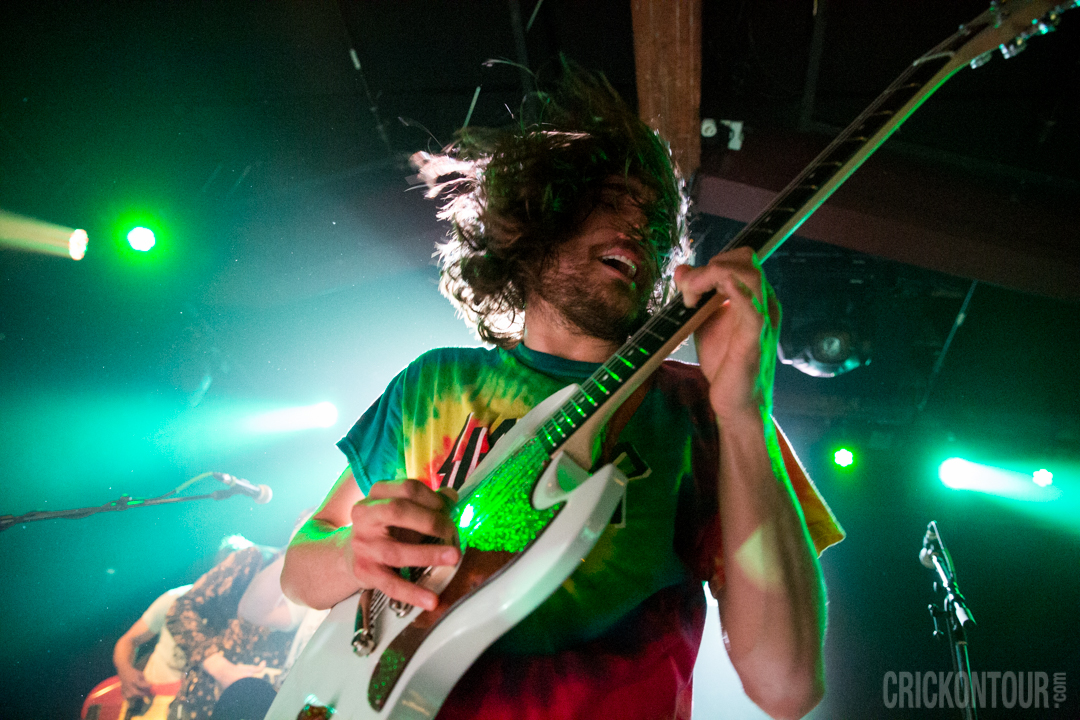 Diarrhea Planet at The Crocodile (Photo by Alex Crick)

Take note: If a man approaches you on the street, indirectly hitting on you, a good way to deflect him is to say that you’re going to a Diarrhea Planet show. He will profess his love of EDM and then suddenly dive into the nearest bar.

Everyone at The Crocodile on Wednesday night was stoked. Prior to the Red Bull Sound Select show beginning, people were crammed into the back bar, all proclaiming their excitement at the prospect of seeing Diarrhea Planet. Nobody tooted their horn about the three dollar price tag. The show could have cost quite a bit more and it still would not have put a damper on the crowd’s spirits as the space in front of the stage slowly but steadily filled up. Some had seen the band before. Some had only heard their music. And of course, some were Diarrhea Planet virgins. But everyone, everyone was ready to have their faces melted off by Nashville’s finest.

Portland band Aan’s music seems to grow in force and intensity with every performance. They have just finished up recording their second album, and it’s apparent that it is going to rock a lot harder than any of their previous work. Their set, while sounding more fierce than in previous performances, still had an atmospheric flavor to it. And Aan’s addition to the bill made much more sense after hearing their new work.

Music Band took the stage after Aan and promptly converted a legion of new fans with their full-on rock and roll sound and antics. As tour mates, label mates, and hometown mates with Diarrhea Planet, Music Band was the perfect lead-in to the headliner. The next time they come to town, they’ll be filling venues all on their own, however.

The name Diarrhea Planet sounds like (is) a sick joke, and when you find that the band has four guitarists, you may feel disgusted at how excessive it seems. Their music sounds good on your stereo, but frankly the only way to understand Diarrhea Planet is to see them live. It is only then that you’ll comprehend it all, and even then your brain will hurt. But hey: it’s a good hurt.

Diarrhea Planet’s songs are smartly crafted pop-punk rock songs. It’s amazing how they can take four guitar parts and create songs that sound slick. It’s even more incredible in a live situation when it’s solo time: we’re used to seeing orgasmic guitar solos, and we’re accustomed to seeing lead guitarists come face to face with the rhythm guitarist or bassist. Diarrhea Planet’s version is pretty much an orgy of solos as five axe men entwine as couples or threesomes. Which knot of players do you watch? Meanwhile, there is someone soloing while squatting right in front of your face. Intense is a pale description. But let’s focus on the drummer for a second, because Ian Bush is a pleasure to watch all on his own as he thrashes on his kit. He only seems to be the calmest member of the band because he can’t fling himself into the crowd and still keep the beat.

Jordan Smith is (maybe?) the frontman, being billed as “singer-guitarist.” Emmett Miller, Evan Bird, and Brent Toler are more in the “guitarist-singer” vein. In any case, any of the guitarists could take control of the primary vocal, and everyone in the band added tried and true punk chorus vocals when called for. Bassist Mike Boyle kept mum, but participated in every noodling solo combination that he possibly could. Smith seemed to have a lot of family and friends in the crowd, and he was continually giving shout-outs. He edged out onto the narrow metal barrier many at the Croc are familiar with that juts out into the crowd with another guitarist, and they rocked out there for a while, amazingly keeping their balance.

And the crowd? The crowd went crazy, and a twisting, churning mosh pit formed almost immediately at the beginning of Diarrhea Planet’s set. Thankfully, Seattle’s mosh pits are pretty darned friendly, so everyone could still enjoy themselves. After rocking out for a good long time and then getting cheered back onto the stage, Music Band’s Harry Kagan came out to front Diarrhea Planet for a crushing cover of AC/DC’s “Thunderstruck.” Kagan’s ragged volcano vocal was AMAZING, and the performance was the perfect end to a night of monstrous rock ‘n’ roll.

Christine Mitchell has been poring over album liner notes pretty much since she acquired the skill of reading, and figured out the basic structure of rock songs at an early age. Whether it’s the needle popping into the first groove of the record, the beeps that signal the beginning (or end) of a cassette tape, or digital numbers ticking off the seconds from zero, music brings Christine happiness, ponderous thought, opportunities for almost scientific study, and sometimes a few tears. When she started attending live shows two decades ago, a whole new piece of the puzzle clicked in and she has been hooked ever since.
Related ItemsAANAlex CrickChristine MitchellDiarrhea PlanetFeatureMusic BandThe Crocodile
← Previous Story Man Against The World: Gary Clark Jr. at the Moore
Next Story → Parachute Lights Up the Neptune