Man Against The World: Gary Clark Jr. at the Moore 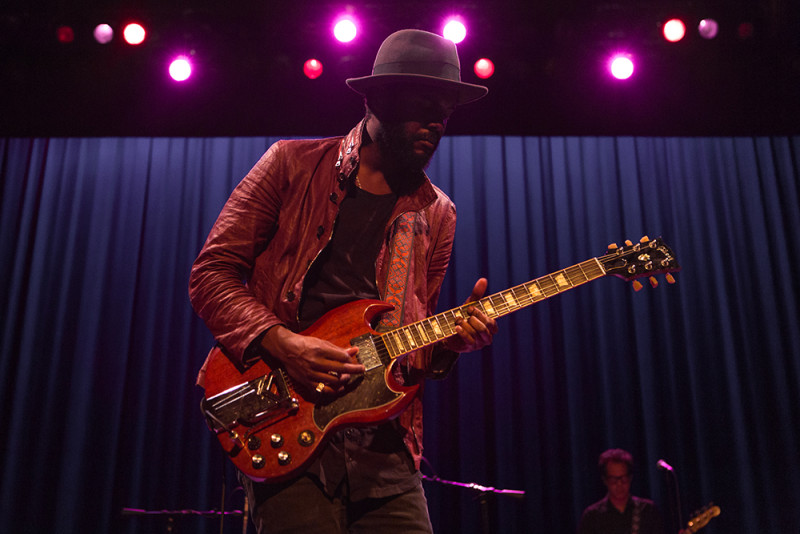 How is it possible to blend the trappings of Mumford, the riffs of Jimi, the stage swagger of Elvis and the punk rock attitude of the Ramones? It was hard to make sense of the Swedish-sister trio, Baskery, as they approached the upright bass, acoustic guitar, and banjo in matching outfits. In front of each of them were parts of a spray-painted, deconstructed drum set. The enchanting and high-energy set they delivered, however, left the crowd both bewildered and captivated. With a broad spectrum of musical influence, Baskery has truly spun a unique banjo-punk twist on an otherwise tired neo-folk genre.

The opening song, “Northern Girl,” was a vocal-only performance that showcased their exhaustive ranges, bringing the sold out Moore Theatre to a silent halt. With 1,400 people now eagerly awaiting their next harmonious syllable, they made the delightfully jarring transition to a driving, upbeat, and bass-heavy tune. With long blonde hair in her eyes, the youngest sister, Sunniva, donned a low-slung electric guitar and wielded her gritty, aggressive tone on an unassuming audience. In between hair flips, her sparkly gold Converse high tops would occasionally vault from the kick drum coupled with a mid-air karate kick for added chord-change emphasis. Meanwhile, the lead vocalist and eldest sister, Greta, sat center stage shredding a banjo solo while simultaneously pedaling a kick and snare drum – beautifully displaying Baskery’s ‘zero fucks given’ charm.

While completely smitten by the badass attitude, on-stage theatrics, and flawless vocal delivery, the set left me wanting to hear more dynamics of their sound. The performance overall was a rapid-fire set of feel-good anthems with plenty of action and not much variety. Keep your eyes on their Soundcloud page where their catalog is most current.

While mid-air karate kicks were absent from Gary Clark Jr’s set, he still landed a few blows of his own. Rare is the performance that draws you in to share an experience with an artist as they relive heartbreak, wrestle demons, and speak against injustice. Clark delivered one of those immersive experiences that allows you to momentarily forget where you are. It wasn’t the contact high talking, either.

As the lights dimmed in preparation for the main act, the backing band assumed position in the shadowed flanks of a no-frills stage design – bass, drums, and guitar. There were no gaudy synthesizers, flashing lights, or excessive stacks of boutique amplifiers – just the bare essentials for a live performance, stripped of all pretension. Hailing from the Lone Star State, Clark likely felt right at home on a bare stage that would make most performers feel uncomfortably isolated. Emerging from the dimly lit side stage, he casually sauntered toward the microphone wearing his signature fedora and weathered leather jacket. The crowd immediately erupted with the first jabbing guitar strokes of “Bright Lights,” in which the lyrics repeat, “You’re gonna know my name by the end of the night.” It’s not as if everyone in the sold out room didn’t already know his name, but the explosive opener gave us our only glimpse of braggadocio in a set otherwise delivered with refreshing humility. Free from gimmicks and pretense, Clark proceeded to play to his strengths throughout the evening with few words spoken to the audience between songs.

As he transitioned from the self-endorsing rock refrain of “Bright Lights” to the rockabilly-infused “Travis County,” it seemed no genre was out of reach for him. While the core of his sound hints at his upbringing and hometown heroes, such as Stevie Ray Vaughn, he manages to meld timeless tone with soulful and modern arrangements. Rather than rehashing vintage tones, he sets himself apart by floating his smoky smooth voice over heavy, smeared riffs, crashing head on with the reverb-drenched textures and rhythmic layers provided by the band in the shadows. Although the supporting band was seldom featured, Clark often split the spotlight between his vocals and his guitar as he emulated the man-against-the-world Blues attitude reminiscent of Junior Kimbrough and Son House.

As with his vocal styling, Clark separates himself from the genre’s founding fathers by his trademark fuzzed out guitar tone and unique phrasing. When guitar solos are featured on nearly every song throughout a 2-hour set, it can quickly spiral into a hackneyed jam band display of self-indulgence. However, there’s a tangible tension in his music that’s rooted in conflict and drenched in authenticity. Every fret board movement and vocal croon was so effortless – no big deal – that it felt less contrived and more like a natural extension of the deep connection between a man and his guitar. It’s strange to think of a guitar solo as a narrative arc that builds anticipation and draws the listener in, but Clark’s delivery always felt more like an invitation to eavesdrop on a private conversation.