By Christine Mitchell on April 26, 2016@Housetornado37 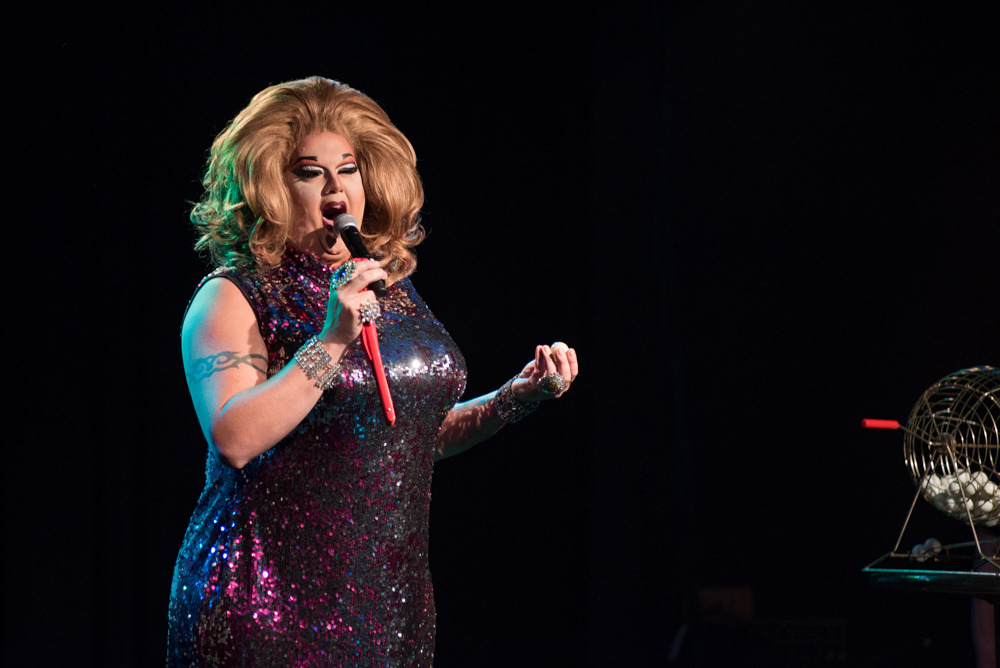 Bumbershoot’s 2016 lineup was announced with plenty of flair this week with a free bingo party at the Showbox, featuring Full Tilt ice cream bars, pizza, burritos, and flashy emceeing from Seattle’s beloved drag queen Mama Tits. Mama’s bawdy quips made an already giddy night into a giggly one, her blue language and incessant innuendos peppered between calling bingo numbers and the announcements of spurts of band names playing the decades-strong festival. Each round of bingo was capped off with its winner tossing t-shirts into the crowd and then walking off stage with a prize package of their own that ranged from vinyl records to festival passes.

And there is plenty to be excited about. First, watch the official lineup announcement video and then continue on for a roundup below:

The crown jewel of the set,of course, is Seattle’s own Macklemore & Ryan Lewis, love them or hate them as you see fit. That alone is sure to pack Memorial Stadium come Labor Day weekend. Death Cab for Cutie is another local juggernaut that carries international status and is sure to draw crowds. The Main Stage is sporting a healthy clutch of hip hop and rap artists, with G-Eazy, Porter Robinson, Run The Jewels, and Fetty Wap, all of whom drew huge cheers from fans at the lineup announcement. Flatbush ZOMBIES, Tyler The Creator, and Shaprece bring the beats on down to the smaller stages.

Father John Misty is nothing to sneeze at, having just sold out the Paramount. Along with Bumbershoot’s other two major headliners, the festival appears to be putting the focus back on our hometown talent, which seemed to be shoved off to a side stage for the most part last year. Naked Giants is sure to put on a raucous show, just as Chastity Belt will invariably wryly chill things out. Dude York is back after a year off, while songstress Maiah Manser is a welcome fresh face (will she perform “Contain You,” her song with Manatee Commune?). Bumbershoot is the perfect setting to take in the weirdness of So Pitted. There are great local bands in this year’s lineup; hopefully the local stage will be centrally located this year to show ’em off.

The festival is also sporting the strange, yet smile-inducing choice of Billy Idol, probably to entice oldsters. But make no mistake, Idol will be entertaining. Andrew Bird’s mad-scientist, violin-glockenspiel-whistling virtuoso skills are sure to enthrall the crowd no matter its mean age, and his new LP Are You Serious continues to hammer Bird’s talent into the public’s consciousness. International acts include Aussies Atlas Genius and South Africa by way of Brooklyn’s St. Lucia, among others.

And these are just some of the myriad acts performing this year, to say nothing of the strong tradition of art, comedy, and film at Bumbershoot. Get ready to be entertained; you have all summer to foam at the mouth over it all. Visit bumbershoot.com to learn how to buy passes.

Christine Mitchell has been poring over album liner notes pretty much since she acquired the skill of reading, and figured out the basic structure of rock songs at an early age. Whether it’s the needle popping into the first groove of the record, the beeps that signal the beginning (or end) of a cassette tape, or digital numbers ticking off the seconds from zero, music brings Christine happiness, ponderous thought, opportunities for almost scientific study, and sometimes a few tears. When she started attending live shows two decades ago, a whole new piece of the puzzle clicked in and she has been hooked ever since.
Related ItemsAndrew BirdBilly IdolBumbershootChristine MitchellFeatureMacklemore & Ryan LewisMusic FestivalShowboxThe Flavr Blue
← Previous Story Little Big Show #15 Show Preview
Next Story → TONIGHT: Napalm Death at Showbox