INSIDE OUT: Playlist Seattle – Women Who Rock

By Robin Fairbanks on May 6, 2016@robinfairbanks 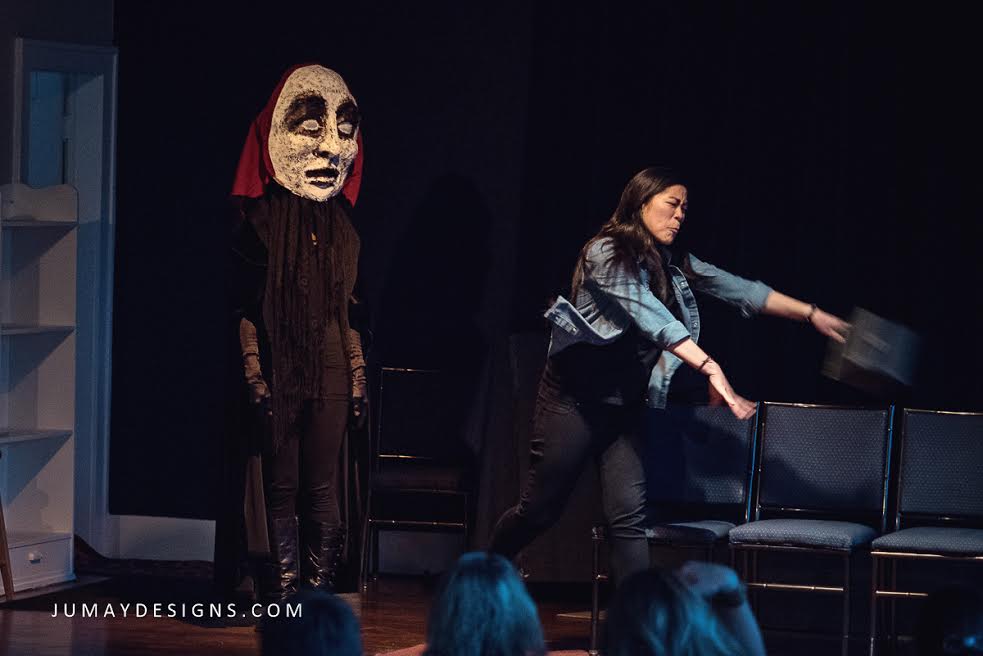 INSIDE OUT is a look from within the Seattle Music Industry.

Playlist Seattle is the brainchild of Director Kelly McMahon. McMahon is an avid fan of music and those who create it. She’s created a running show with an ensemble cast that creates thought-provoking vignettes inspired by some of her favorite local musical artists. Together they express and explore, using the connection of two different art forms. Housed at Ballard Homestead, the small hall setting provides an intimate setting for these performances.

Based around lyrics of select songs by a chosen artist, the vignettes performed are up for individual interpretation, according to McMahon’s vision. Created in a relatively short span of time, they are thought-provoking, humorous, and sometimes uncomfortable. Isn’t that what art should do, stir our emotions and make us feel something?

In this series, the cast was all female, and ran for three consecutive nights, with a different guest Singer/Songwriter as a focus for each night. The cast performed the same song titles each night but with a different vignette performance so you could literally see all 3 nights and no show would be the same. Each play was followed by a short acoustic set by the Singer/Songwriter.

Ballard Homestead’s starkness added to the ambiance of Playlist Seattle’s minimalist set and costumes, which put the focus on the acting. With no lavish set to distract, the actors’ words and actions painted pictures which at times stirred up rather dark uncomfortable feelings. Yet the performance was peppered with light moments, eliciting laughter at the ridiculousness of real life.

Some of the night’s favorites were:

“What’s Wrong with Me?” by Amanda Hardy. Impression: Angels walk among us and come to us in times of need. People too self-absorbed to smell the roses or even notice that others are hurting and in need. Things may not be what they seem.

“Kryptonite Couch,” by Jamie Nova. Impression: Pity, jealousy, stuck, self-sabotage, fear, and excuses are some of the paralyzing obstacles that keep us from moving forward. Bragging about big plans/dreams but never putting them into action for fear of failing. Excuses as to why success hasn’t happened but never taking responsibility. Blame and criticize others who were brave enough to implement and live their dream.

McMahon is in talks with other notable musicians, which will likely result in a possible late summer/early fall show. She did confirm that she’s developing a full length production based on a debut record by Martin Sepulveda, a local hip hop producer. Titled LV:SK FM (pronounced “Love Sick”), the performance is tentatively scheduled for Sept 30th at Washington Hall. These LP (long play) projects are the next phase of programming.

Robin Fairbanks has spent 30+ years in the Music Industry in many capacities. Working in the Seattle music scene since 2006 as a Manager/Booker, she’s known for her ethics and artist development skills. Robin has guided the careers of many, but most notable as the former Manager of Seattle Garage/Blues band Fox and The Law for 3.5 years. Robin has spent the last 2 yrs consulting with Artists who seek her help as a Music Consultant and Publicist with Setlist Music Solutions LLC. She also gives of her time as an advisor to Seattle Wave Radio, an Internet music station where she helped shape its sound as the ROCK Channel Music Director for 2+ yrs upon its launch in 2010 and where you’ll find her music blog, “Bird On A Wire“. In 2014, Robin also worked as a Contributing Music Writer for Guerrilla Candy.
Related ItemsBallard HomesteadFeatureinside outPlaylist SeattleRobin Fairbanks
← Previous Story Stripper Poles in Small Venues: Lapsley’s Hype Train Stations in Seattle
Next Story → Another Hot Dance Party With Mayer Hawthorne