Be Still Your Broken Emo Hearts: Blaqk Audio At The Crocodile 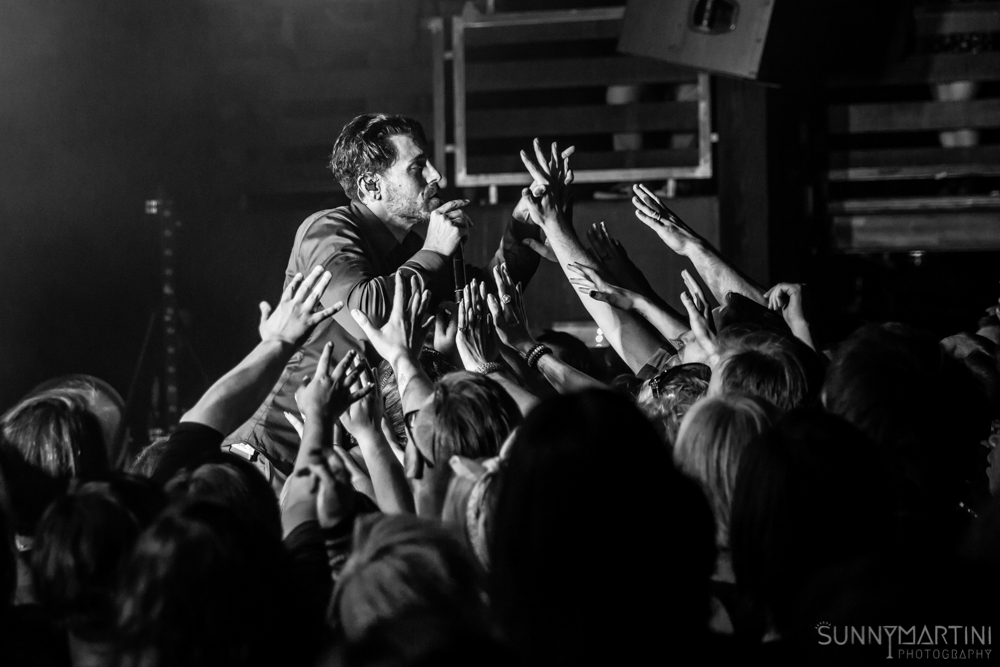 Los Angeles alt-rock band Charming Liars opened up the night to an already packed room at Seattle’s Crocodile venue. With all the ingredients of a big-time band, they immediately flooded the room with bass and reverb, their equipment packed toward the front of the stage. Vocalist Kiliyan Maguire does a good job of working up the crowd, and their high-impact, radio-friendly rock keeps the energy up. Their well-crafted pop-rock, complete with big hooks, cohesive instrumentation, and melodic anthems should be propelling them into headlining gigs before too long.

They were followed by Night Riots, another Southern California group with their own big, bad sound. And by bad, we mean good. There’s a massive, haunting melody through which their synth-pop swims, reminiscent of The Cure, Bad Suns, and U2. NR is aggressively anthemic, vocalist Travis Hawley’s voice stretching to fill the room, hitting soaring notes that perfectly complement the quintet’s futuristic keys and infectious, danceable beats. Their cover of Tears for Fears’s “Everybody Wants to Rule the World” wasn’t a stretch by any means, and they closed with their hit single “Contagious” which the crowd was clearly familiar with as they all sang and jumped along.

After what had already proved an energetic, sweat-inducing show, the sold out crowd was finally ready for the night’s headliners, Blaqk Audio, in support of their latest April 2016 release Material. During the break, you could hear everyone in the room sharing their favorite Davey Havok lyrics, or their best AFI concert memories. This was a crowd of rabid fans, for sure. The venue filled with fog, three laptops gracing a table at the back of the stage, a single mic stand at the front. Programming master Jade Puget entered first, igniting the crowd with the opening strains of “Again, Again and Again” before puppetmaster Havok bounded out in his white suit, red shirt and tie.

Known for his unrepentant energy and stage interactions, Havok’s performance for this show was no exception. He is an expert at interacting with the crowd, making it seem like he is singing directly to each one of them, as they sing every word right along with him. He poses, and primps, and shakes his booty. He incites the crowd to reach out and touch him, just by being present. This is haunting electro goth-glam that –  even if you had no idea who AFI were – would be hard to ignore, hard not to move to.

The band’s set list covered material from all three of their albums, and by the third song, Havok’s suit jacket is off and Puget is dancing right along with him in the back. It would be impossible to pick out a crowd favorite, as every track garnered the same amount of incredible enthusiasm. From the seductive “Anointed” to the sullen pop “Material,” Havok’s vocals are crisp and clear, his inflections acrobatic and full. The hypnotic “First to Love” required dancing, and the set closer “Stiff Kittens” brought the house down. That is, until the encore cover of Erasure’s “A Little Respect” and the up-tempo “Semiotic Love.”

All in all, Blaqk Audio’s dark synth-pop is basically just one big emo-hearted party, and their live show shouldn’t be missed.

Related ItemsAFIBlaqk AudioCharming LiarsCrocodileFeatureNight Riotsstephanie doreSunita Martini
← Previous Story Cafe Nordo – one the hottest tickets in town. (part 1)
Next Story → Piano Man Knocks It Out Of The Park At Safeco