Interview with Max Cavalera of the band Soulfly

By Mike Baltierra on May 23, 2016@baltierraphoto 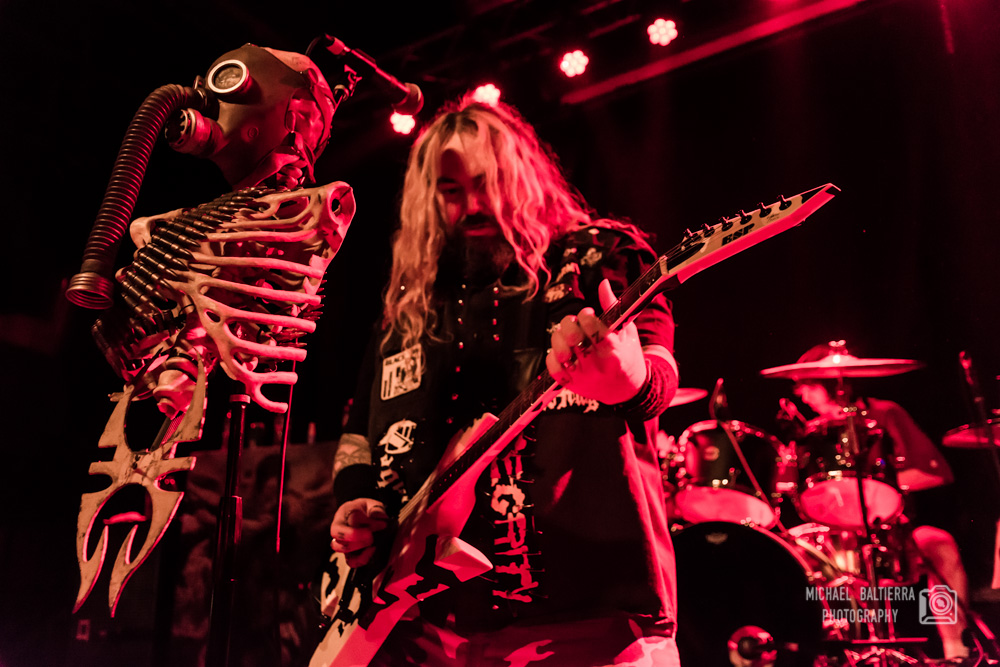 Michael Baltierra recently sat down with Max Cavalera, front man for the band Soulfly, before their concert on Sunday May 15, 2016 at Studio 7 in Seattle, WA. Soulfly is currently on tour in support of their latest release, Archangel.

SMI: Soulfly’s latest album, Archangel, is an awesome album. One of the best albums released by any band within the last couple of years. What is the current line up? Would you mind elaborating on the mindset, the thought process, and themes behind the album?

Cavalera: Thanks for the compliment! The current Soulfly line up is Marc Rizzo on guitar, Mike Leon on bass, Zyon Cavalera on drums, and myself on guitar and vocals. We spent a great deal of time on the album. I spent a great deal of time writing the riffs, which typically takes about six months. After I completed the riffs, I went and jammed the riffs with my son and drummer, Zyon, so he could be very familiar with the material before we entered the studio. We decided to use Matt Hyde, who has produced albums for bands like Slayer and Deftones, and he mixed the latest album by Behemoth, and we wanted take a similar approach that Behemoth had taken, utilizing biblical lyrics, that when mixed with heavy metal, creates a very mystic and mythical dynamic to the theme of the album. So, I went full speed ahead, reading a lot of the Old Testament, and Matt Hyde loved the idea and he even so far as to help with some of the kabbalah wording, really old Hebrew style of writing. The album artwork is gorgeous, and was done by Eliran Kantor, who has also done album artwork for such bands and Testament and Iced Earth. The concept art is of the Archangel Michael who has a Soulfly weapon. It’s a really great record with a lot of different influences.

SMI: One of the first things noticed while listening to you speak is that your grasp of the English language has come a long way since coming into the music scene twenty plus years ago, which, at the time, your Portuguese accent was very profound.

Cavalera: I really don’t think much about it. Some producers in the past have tried to fix my accent or way of speaking or pronunciation, which I didn’t like. I would tell them, “this is the way I sing, the way I sound, keep it original”. One of the best compliments I have received on my way if singing was from Dave Grohl. He said he loves the way I sound, very original and that “it’s great hearing someone from a different part of the world singing heavy metal”. I still think I have some of my accent left. It’s gotten better over time, of course. I am still very fluent in Portuguese, and I speak it often, especially when I speak with my brother Igor Cavalera, or my mother, or when I speak with my friends when I go home to Brazil. My wife and friends still give me a hard time and poke fun at me for the way I say some words, but it’s pretty funny.

SMI: One the things that is very interesting is that your wife is your band manager and your sons are also musicians. Do you it find gratifying to have your sons on tour with you?

Cavalera: Both Zyon (drums) and Igor (guitar/vocals) are in Lody Kong, with Zyon also playing drums in Soulfly. I have never hidden the fact we are a family. I have always been very proud to be a dad in a metal world. When Zyon was born, I was very proud and I wanted everyone to know I had a son. At the time, Roadrunner Records made some promotional pictures of my wife Gloria and me holding Zyon, introducing him to the world. Apparently Roadrunner had never done that for any band, but they did it for us, so that was an honor. Blue Grape Merchandising made a cool little back pack with his name on it. My sons were born on the road, so we have never separated, they have been on all of the tours. They learned to play their instruments while on the road. Matter, of fact, I have pictures of them as young boys sleeping on guitar cases with Ozzy Osbourne singing in the background. Chances of my sons becoming lawyers or doctors were pretty slim. I thought it would be very cool of they ended up as musicians. They knew they wanted to be musicians. I am really happy that the gene was strong enough for them to become very good musicians. Zyon is an amazing drummer and he is doing an amazing job with Soulfly. Igor has a lot of me in him, in his style of playing, singing and writing. I am a big fan of my sons’ band Lody Kong, I think they are a great band, very different from my stuff, they have their own style, blazing their own path. I think it’s very cool and unique to have my family with me. Having the entire family traveling is a very special thing. I am very proud.

SMI: Speaking of family, throughout your musical journey, have you noticed that more and more people, who have been fans for the longest time, bringing their children to the shows with them? How does that make you feel?

Cavalera: It’s freaking great! A lot times, sons or daughters come with one or both of their parents to a show. Sometimes, those children are pretty young. On this tour, I have noticed seven or even eight year old kids right up in front of the stage. Most of the time, the parents are Sepultura fans and the children are Soulfly fans, which is kind of funny. The parents know more about the past, Sepultura, and the kids are into the now, which is Soulfly. I think it’s really awesome having such a diverse fan base, from really young kids, to people our age. It’s really cool for me to meet fans who come to shows with their kids.

Cavalera: I just like to play. I honestly really love playing smaller venues, such as tonight’s show. Smaller clubs, but packed, very intimate and close to the audience. As much as the big festivals are great, I think it’s hard to interact with the larger crowd because they are so far out there. Hard to get in close contact with that large of a crowd. It looks awesome to see fifty to sixty thousand people jumping and bouncing, and the huge circle pits. I really enjoy the smaller venues. You can be in touch with your fans and you can feel the excitement. With larger festivals, though they may have a stacked bill, they can be all day and by the time the headliners hit the stage, the fans can be super tired or they have left because it was such a long day. With the smaller venues, you can put on a great show, with a great line up and it’s not that expensive. Tonight for example, seven bands for thirty dollars is a great value, especially in today’s world with people having issues with money, or the lack of money. Regarding this tour, the fan response has been great, and better than expected. We have a great package with Lody Kong, Abnormality, Battlecross, and Suffocation. We have been pretty lucky we can play with trash or even death metal bands and it fits perfectly. A lot of the shows on this tour have been sold out. Sure, they may be four to five hundred people, but it’s been very exciting. I am just sad the tour is almost over, we have another week. I wish we had another month. 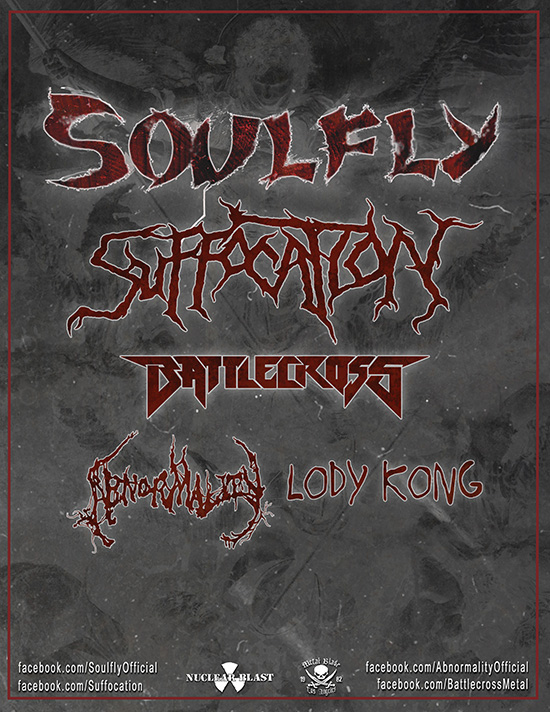 SMI: What’s the plan for after the tour?

Cavalera: Take little break. Start writing new riffs for another band I am in, Killer Be Killed. Hopefully we’ll get another album out next year. Then Cavalera Conspiracy, which is my brother Igor, Marc Rizzo, Johnny Chow and myself, start rehearsing to go on tour and we plan on playing Sepultura’s Roots album in its entirety, from beginning to end, as well as some other songs. We have Fear Factory confirmed as an opener on that tour. So it’s going to be really good, I am very excited. But, the primary objective is to get home, write an awesome follow up Killer Be Killed’s first album, and I think we can make an even better record the second time around.

SMI: In the past, Soulfly has changed members in its lineup to keep the sound fresh, as you have described in previous interviews. With Archangel and the previous album, Savages, the lineup was pretty consistent. Do you foresee the current lineup being the lineup moving forward?

Cavalera: We recently added bass player Mike Leon, who had previously played in Havok. Mike joined us shortly after Archangel came out. Our previous bass player, Tony Campos, left to join Fear Factory. I love Tony and he’s a great bass player and a great person, but I really love Mike and I believe he brings a more “thrash” style of playing. He’s a killer bass player with great hair! I had two bald dudes, Marc and Tony, in the band, one to my left and one to my right. It’s great having someone with hair! So now I have a head banging partner. I do think this lineup will be on the next record. Only time will tell what happens after that. I don’t have crystal ball, I just take every day as it comes.