By Mike Baltierra on June 20, 2016@baltierraphoto 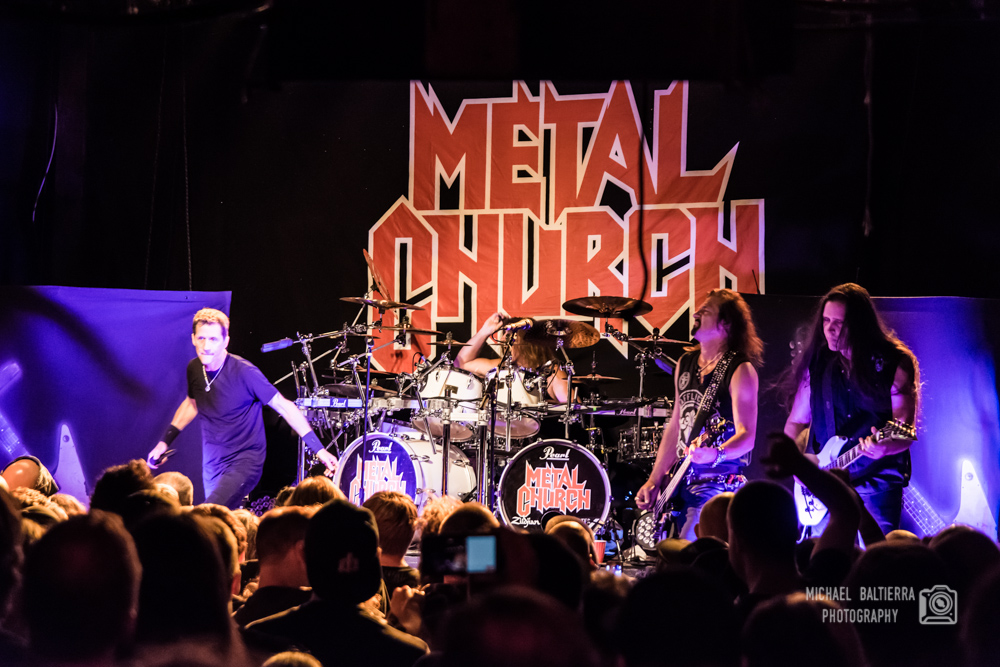 Heavy metal legends Metal Church and Armored Saint teamed up for a quick jaunt up and down the west coast, bringing their brand of American heavy metal out to the masses, both playing full sets to rabid fans who came out to Studio 7 on a chilly wet Seattle evening.

With a packed and excited crowd chanting their name, the first of the co-headliners, LA’s Armored Saint (John Bush (vocals), Joey Vera (bass), Phil Sandoval (guitar), Jeff Duncan (guitar) & Gonzo Sandoval (drums)) took the stage. The band is touring in support of their latest release, Win Hands Down. They started the evening off with the opening track off of said album, and the band wasted little time playing many fan favorites such as ‘After Me, the Flood,’ ‘Long Before I Die,’ ‘Raising Fear,’ ‘Last Train Home,’ and ‘March of the Saint.’ The band made it a point to play many selections of their three decade long catalog. Sandoval and Duncan made for an excellent guitar duo, each with their own exceptional playing style, complimenting each other perfectly. Vera is one of heavy metal’s best bass players, and along with Gonzo Sandoval provided a solid rhythm foundation for the band. Bush kept the crowd well entertained with his strong melodic vocal style. Armored Saint were top notch, and with this being their first appearance in Seattle in over a decade, provided an excellent set that left no one disappointed.

Metal Church, who hail from Aberdeen, WA, is made up of Mike Howe (vocals), Kurdt Vanderhoof (guitar), Rick Van Zandt (guitar), Steve Unger (bass) and Jeff Plate (drums). They are touring in support of their latest release, XI, which is the first album to feature Howe on vocals in twenty one years. Opening their set with ‘Fake Healer’ from their 1989 release Blessing in Disguise, the band played to an enthusiastic crowd who were ready for what the band had coming. The band proceeded to play songs that featured Howe on vocals, like ‘Blessing In Disguise’, ‘The Human Factor’, ‘Hanging in the Balance’, and ‘XI,’ as well as a few selections that were recorded with the late David Wayne on vocals.  The band tore through fan favorites such as ‘Watch the Children Pray,’ ‘Date with Poverty,’ ‘Start the Fire,’ ‘Reset,’ and ‘No Friend of Mine.’ Howe had the energy and vocal power of someone half his age, playing with the crowd and getting them to sing along with the choruses. Vanderhoof and Van Zandt blended superb rhythm and lead guitar playing, making up a dynamic guitar duo. With Unger on bass and Plate on drums providing the rhythm section, Metal Church steamrolled the crowd from beginning to end.  The band is set to head to Europe to play a number of festivals, most notably the Bang Your Head Festival and the Wacken Open Air Festival.

Support bands for the evening were Seattle bands Sin Circus, Substratum and Slamshifter.

Armored Saint Setlist
Win Hands Down
March of the Saint
Tribal Dance
An Exercise in Debauchery
Long Before I Die
Mess
Raising Fear
Last Train Home
After Me, the Flood
Aftermath
Left Hook from Right Field
Reign of Fire
Can U Deliver
Mad House