The Posies’ Secret Show at Hilliard’s 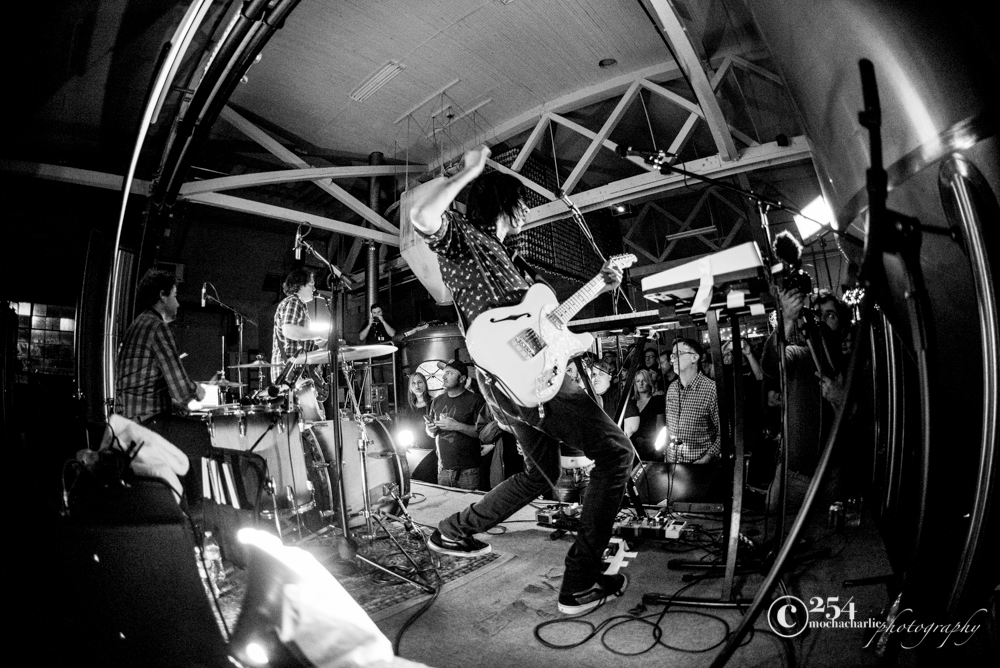 The Posies triumphantly returned to Seattle on May 26, playing a set filled with fan favorites and plenty of material from their excellent new album Solid States at Hilliard’s Brewery in Ballard.

The show wasn’t just a coming out party for the wonderful songs on Solid States, it was also one of the final shows of the band’s secret pop-up shows tour where The Posies played small, intimate venues that aren’t ordinarily concert spaces. Adding to the fun, the fans who bought tickets weren’t told where the show was being held until the day of the concert. Their Seattle stop, presented by Seattle Secret Shows, found them performing in a room filled with hundreds of cases of beer, tall fermenters and brew kettles.

The evening’s festivities kicked off with sets by DJ Indica Jones and local songwriter Spencer Carlson.

Then, the Posies’ two-hour, 20-song set started with the one-two punch of “We R Power” and “Unlikely Places,” the first two tracks off Solid States. The songs aren’t just terrific introductions to the band’s new musical direction but they also proved to be the perfect choice for set openers.

The show began with faint electronic drum beats getting louder and louder leading into Ken Stringfellow ripping into “We R Power,” a song that could become a sort of mission statement for the band. When the song concluded, Stringfellow’s musical partner in crime, longtime friend and Posies co-founder Jon Auer, was stage left energetically bouncing up and down playing his guitar along to the catchy groove of “Unlikely Places.”

Unlike a lot of the band’s previous material, the songs on Solid States feature electronic soundscapes with synths, keys and drum machines providing a lot of the oomph. It’s not the sound of a band entering a midlife crisis attempting to remain relevant, nor is it a complete departure from the band’s power pop roots. This new direction is a refreshing musical evolution for The Posies, and live the songs not only gel well with the band’s already formidable canon, they excel and are given a sense of immediacy and strength not felt on the album.

Older songs like “Solar Sister,” “Please Return It,” and “Throwaway” kept their guitar-driven crunch and fuzz and sounded great sandwiched between newer songs. And more recent material like “The Glitter Prize” and “Licenses to Hide,” during which the band was accompanied by Anomie Belle, made for great transition songs that showed the sonic bridge between the band’s guitar-driven rock of the 90s and aughts to their current sound.

Along with Posies classics, one of the many standout tracks on Solid States, “Rollercoaster Zen,” was a highlight of the night. Auer dedicated the song to former Darius Minwalla who died unexpectedly in 2015 and former bassist Joe Skyward who passed away two days before the band started its European tour earlier this year.

The band performed as a trio, with Stringfellow and Auer playing guitar and sharing vocal duties and new member Frankie Siragusa on drums. For his part, Siragusa fit right in hitting the skins with precision playing along perfectly to the electronic backing tracks and bashing away to the harder-edged deep cuts from earlier in the band’s career when needed. And, forgive the wordplay here, he shined the brightest during “Burn & Shine,” when he worked up such a frenzy behind the kit during the song’s climactic bridge that he broke a stick, sending instrumental shrapnel into the crowd, and replaced with ease it while drumming along without missing a beat. All the while, local artist Jimmy Gersen was live painting three captivating pieces just to the side of the stage.

A few songs into the set Auer cheekily acknowledged the band’s ‘90s past welcoming the crowd to “The Posies Cruise.” Stringfellow the quipped they were originally going to have the show on a Ride The Ducks boat but insurance was too high, showing that while both he and Auer have moved away from Seattle to live in Europe that they still stay connected to their Northwest roots.

Prior to the encore, which started with the sugary pop-pop goodness of “Flavor of the Month,” Stringfellow encouraged fans to remove the chairs in the front rows so the crowd in the back could get closer to the stage and dance along to the final few songs. The band left the stage on a fiery high note after a raucous “Grant Hart” and promised to return to the Emerald City to play a much bigger show in a much bigger venue in November.

Mocha Charlie is an amazing photographer who has a real passion for music. She covers and shoots several shows per month in and around the region. She a brilliant photo journalist but most importantly, she is also a mother who does her best to balance out her life and live it to the fullest. Mocha Charlie uses her passion and talent to support the community, her friends and family any way that she can.
Related ItemsDJ Indica JonesFeatureFrankie SiragusaHilliard'sJimmy GersenJon AuerKen StringfellowMocha CharlieSeattle Secret ShowsSolid StatesSpencer CarlsonThe PosiesTravis Hay
← Previous Story Santigold Raises $20,000 For EMP Youth Programs
Next Story → Brendan James Howls Back To Seattle