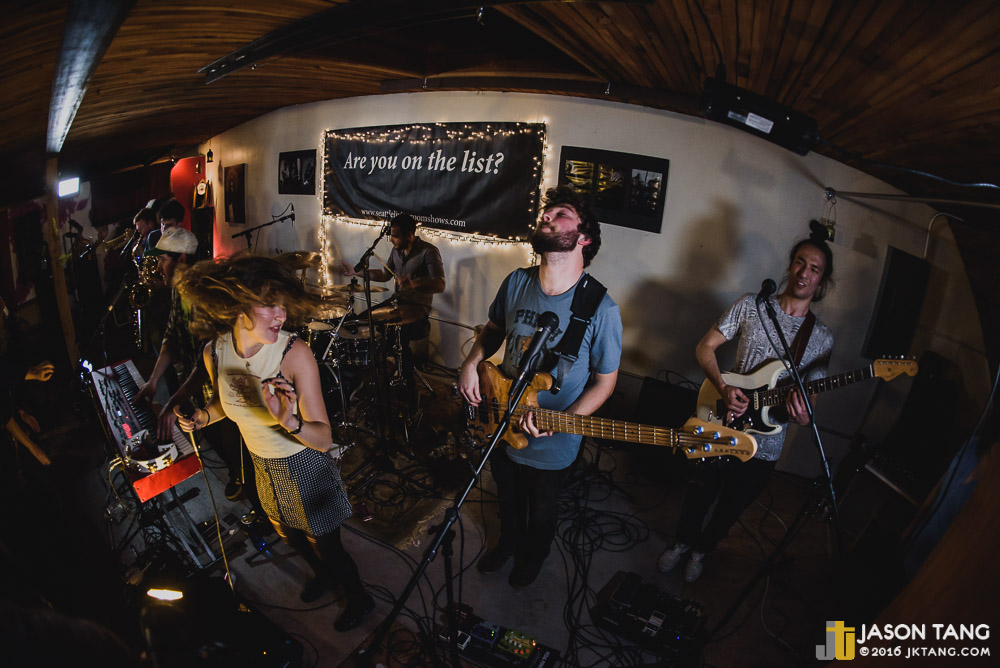 A few months back we had the opportunity to catch Lawrence, an amazing Soul/Pop band out of Brooklyn, courtesy of Seattle Secret Shows. SSS Founders, Carrie and Kristen Watt, always come with the goods and turn us on to some cool new music.

Lawrence will return to Seattle to play a show at Capitol Hill’s Barboza tonight – Wednesday, July 13. We have had the opportunity to cover some great shows at all of the top venues in the Northwest and beyond. Lawrence is one of those bands that has something pretty special. It is not just the songs, or how well they play as a precise musical outfit. It is the feel, it is the soul and it is the attitude in which they deliver their numbers. You don’t learn that at Juilliard, you either have IT or you don’t. Lawrence has IT in abundance.

Tickets for tonight’s show can be purchased here. Photos from Lawrence’s previous (and first) visit to Seattle and our exclusive rooftop (yes rooftop not backstage) interview can be viewed below.

The band’s namesake comes from the fact that the fresh-faced duo that front the band happen to be brother and sister. Clyde and Gracie Lawrence are the product of an artistic showbiz family. Their parents raised them right with a steady diet of Janice Joplin, Etta James, Otis Redding, Joe Cocker, Johnny Lang, Stevie Wonder, Michael McDonald, Aretha Franklin and James Brown. Throw in a little Randy Newman for effect here and you have the makings of one of the best outfits we have ever seen grace a stage anywhere in and around The Emerald City. To find out more about Lawrence visit: http://lawrencetheband.com.

One of the many things we love about partnering with and attending Seattle Living Room Shows and Seattle Secret Shows is the live discovery of emerging artists. We have said this many times before but sometimes you don’t know what you are going to get when you attend one of these shows but rest assured, you can be guaranteed that is is going to be brilliant. You might discover an artist you didn’t know about, or you might see an artist you already know and love, but in an unusual and intimate setting. We call that a no-lose proposition.

Not only is he a multi-media journalist, he is also an accomplished musician. He is the founder of SMI and drives the creative look, feel and branding for the publication. His years of writing, arranging, and performing live music in a variety of genres inform his ability to communicate the message and the mechanics of music. Roth’s work on SMI reflects his philosophy that music is the universal language, and builds community. He believes it has the power to unite people of every race, religion, gender, and persuasion.
Related ItemsBarbozaFeatureFunkGreg RothJason TangLawrencePopSeattle Living Room ShowsSeattle Secret ShowsSoul
← Previous Story Review: ‘Four Corners;’ Bands Hit High Dive Saturday
Next Story → Crystal Desert Announces BLACK SUMMER Single Series