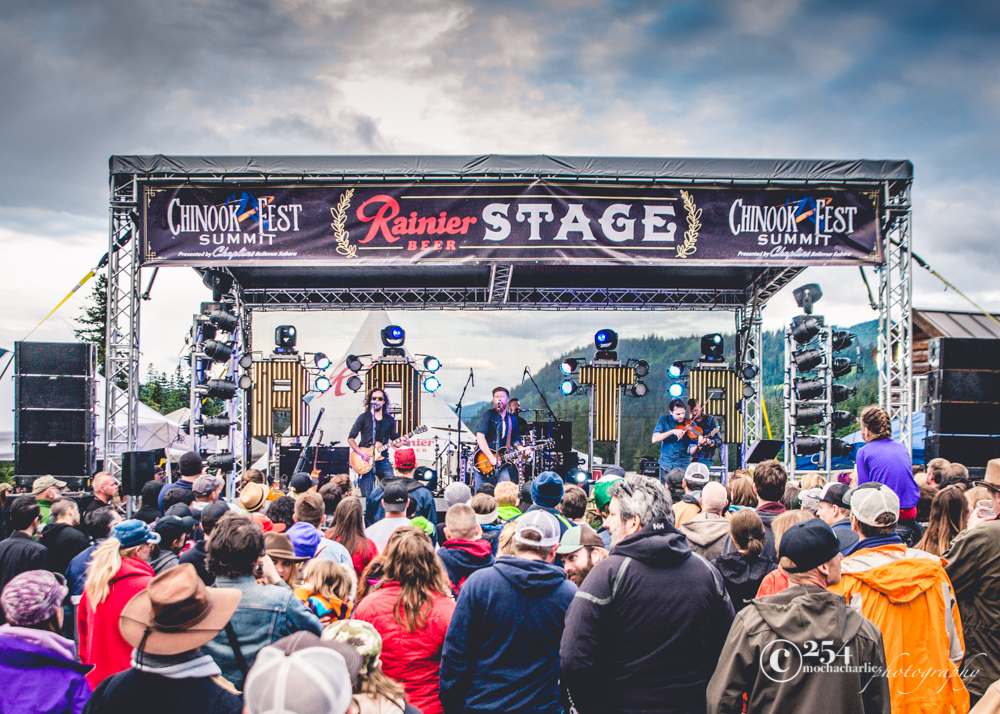 This past weekend Chinook Fest Summit brought together people from both sides of Washington State. When you combine PNW foliage, good company, and a few R&Rs, you get a festival that offers the best of what our region has between the scenery and musical talent.

The dual stage setup fostered a welcoming environment.  It kept guests intrigued as one set would start immediately after the other. Cody Beebe, Chinook Entertainment President and co-founder, and his team worked tirelessly all year to provide such a setting for the festival.  The Chinook team selected artists based on their “quality, variety, and vibe,” explained Beebe.  “We don’t just want to work with good bands, we want to work with good people.”  And that initiative really showed.

The overall vibe of the festival was charismatic and serene. It was intimate enough to promote a sense of familial camaraderie amongst the guests, festival volunteers, and the artists.  From Young in the City to Polyrhythmics and DJ Indica Jones, the onlookers were given quite an array of entertainment.

There were magnetic performances from groups like Portland based My Brothers & I, who never cease to impress with their raw talent and warming sound, and Magic Giant, an LA based band who stopped mid-way on their tour to bask in the Cascade mountains.  Magic Giant possessed an energy that every successful festival needs: a flair and personality that gathered the crowd into a circle as they serenaded from the middle.  Free hugs were also included.

Beebe’s group, Rust on the Rails, gave an electric performance with a whole lot of soul.  They started their set with the foot-stomping “Every Little Thing,” which got the crowd moving, and worked through “Trip” to “Far Cry,” each tune showcasing incredible talents from the band.

Bass guitarist Eric Miller held the harmonic foundation of the band, which had Blake Noble, the lead guitarist and didgeridoo player, enchanted.  During Miller’s solo in the middle of the set, Noble sat in front of him on the stage like an enamored fan, taking in the moment.

Beebe led the team with his rustic vocals and rhythm guitar, giving a captivating performance for each song.  Rust on the Rails also had special guest Andrew Joslyn perform six songs with his fiddle, giving the band an elevated sound and an even heartier performance.

Noble’s unique instrumental sounds kept the crowd spellbound as he blended his techniques with the deft drumming of Chris Lucier, who showcased not only his exceptional musical talents, but also his romantic side.  Lucier’s girlfriend, Kaylee Tilton performed as a featured vocalist on  “Can You Feel It,” and Lucier surprised her at the end of the song with the proclamation of his love and a proposal that made the festival even more intimate.

The Rust on the Rails performance encapsulated the aesthetic of the entire festival: rustic and intimate.  The group plans to put out a few singles and videos this summer with a full album release by the end of this year.  Keep an eye out for tour dates at that time, as the band will be traveling up and down the West Coast and beyond into Europe in 2017.

After the weekend was over, Beebe noted that the festival had improved drastically from last year, and “the atmosphere this year was really warm and allowed for people from various walks of life to all connect and engage”.

With its scenery, large support of volunteers from the community, and some killer performances, this festival is definitely one to add to the calendar for next year. Also check out Chinook Fest Central, taking place from September 9th to 11th.

Madison Warnock is a Seattle native writer/poet/aspiring novelist who graduated from Washington State University with a degree in English. She quickly made her way through freelance work molding her written tact through nonprofit journals, medical societies, and music blogging. She takes her musical inspiration from her close ties with the Seattle music community, and can often be found in recording studios and venues. She's a Technical Writer for GoDaddy, incorporating her love for community outreach and information acquisition. If Madison isn't writing or working she's either searching for the best gluten free/dairy free desserts in the city or playing board games. Notably she's the most cantankerous driver on the road, and she's never late for a show.
Related ItemsAustin JenckesChinook Fest SummitCobrahawkCody BeebeCurrent SwellDave McGraw & Mandy FerDirty RevivalDJ Indica JonesFeatureHappy OrchestraKing RadioLeft Coast GypsiesMadison WarnockMagic GiantMitchell MirandeMocha CharlieMy Brothers & IPolyrhythmicsRabbit WildeRust on the RailsScott PembertonSusan GalbraithThe ClovesThe Fame RiotWhitney MongeYoung in the City
← Previous Story Taste of Chaos Tour at Xfinity Arena
Next Story → Ghosts I’ve Met celebrates ‘Night Repairs’ release at The Crocodile