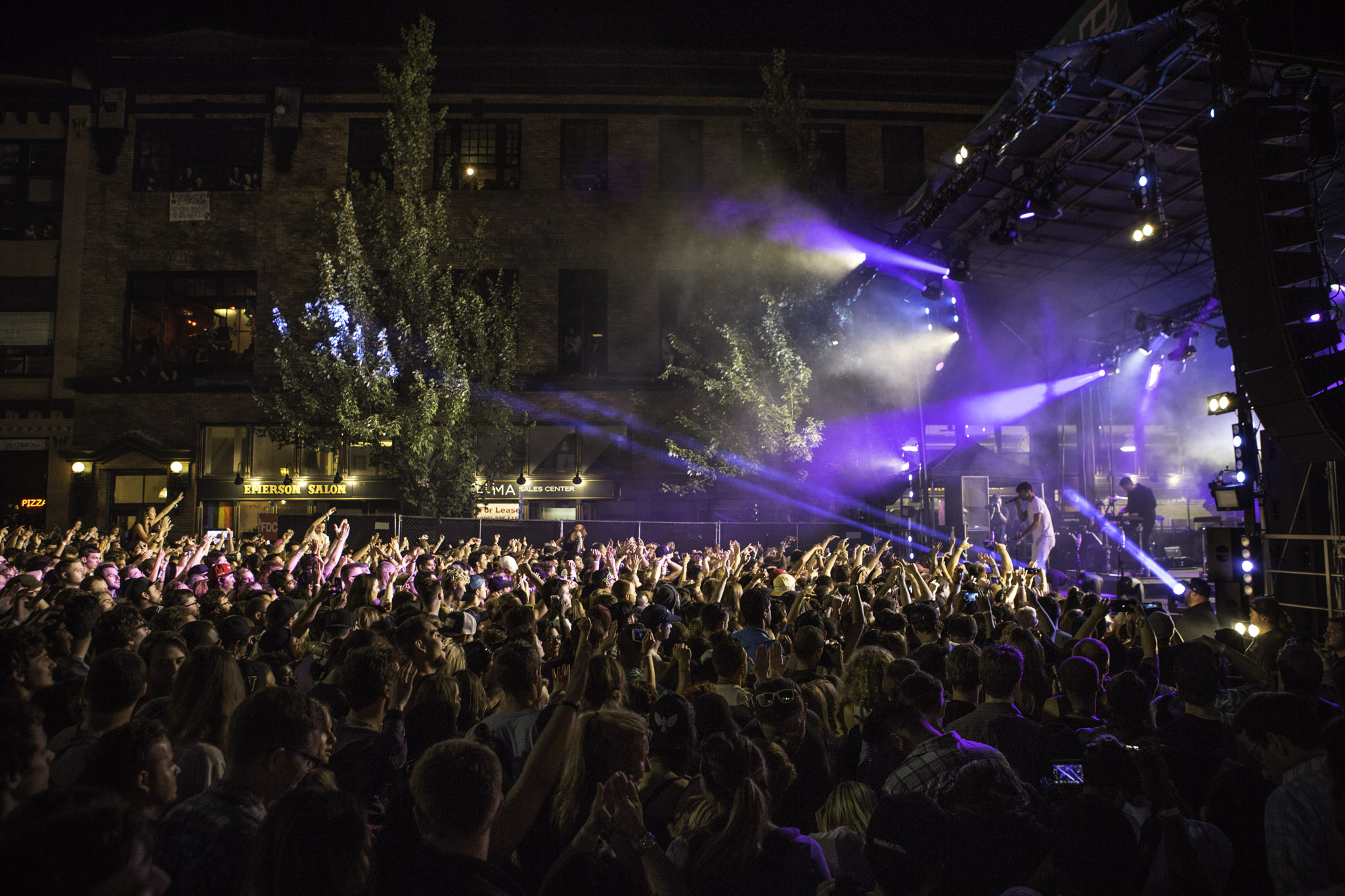 The backstage on Saturday night for Capitol Hill Block Party was awry with stage crew and buzzing artists, but the moment Harrison Mills and Clayton Knight leapt on stage there was a conversion of electricity: the prep for the ODESZA set poured into the audience, who were more than ready.  The three day music festival covering six city blocks, showcasing a number of diverse and entertaining artists was in full force that night.

After yet another music-packed day on Capitol Hill, the audience was ready for some magic, and the duo (along with their band of instrumental supports, The Passenger String Quartet and Blue Thunder (The Seahawks Drumline)) knew just what to give them.

A Seattle native duo, ODESZA has spent the last few years honing in on their sound, and after several chart topping hits, they have a proven track record of killing it at festivals.

What sets ODESZA apart from other EDM bands is their innate authenticity.  They really play.  The guys are making music for their audience, pounding snares, beating drums, and concocting a unique mixture for every song as it’s performed.  They’re not only amazing producers of sound, but of feel: true artists in the moment with robust talent.

Looking out onto the crowd of crammed bodies, girls on shoulders, and inflatables, the energy wasn’t just felt, it was seen.  The audience’s faces glowed as they bobbed up and down and side to side, moving to ODESZA’s media of sound. Their ability to make people feel what they wanted them to was magnetic.

During the set, different artists and musicians were brought on stage, adding their instruments to the battle of sounds.  When Blue Thunder made their appearance they riled up the crowd, standing front and center on the stage, making the show a Seattle ODESZA show.  Dressed in Seahawks regalia, donning sunglasses, and barreling their drums towards the crowd with every beat, the group gave the show an intense homecoming feel. Their bass drums and thunderous snares paired perfectly with ODESZA’s indie electronic sound.

Of course, everything is better with strings. So when The Passenger String Quartet joined in for the fun they weren’t just playing along, they were breathing life and even more energetic dynamics into the songs.  It was an experience to see differing sounds come together to make an epic production.

There wasn’t a crew member backstage that wasn’t feeling the moment, the show, the event that was taking place.  Everyone  seemed to exude excitement and a willingness to help out.  The graciousness of Mills and Knight was evident as well.  After the show they thanked each player and crew member making a point to extend their appreciation for each person’s dedication to the show.

It’s rare to see such professionalism and courteousness from such a name-worthy band, but here in Seattle, with such a hearty community of musicians and fans, they fit right in. The band is embarking on their next journey across the country and overseas, and they gathered an even larger following of fans from their time at Capitol Hill Block Party.

Madison Warnock is a Seattle native writer/poet/aspiring novelist who graduated from Washington State University with a degree in English. She quickly made her way through freelance work molding her written tact through nonprofit journals, medical societies, and music blogging. She takes her musical inspiration from her close ties with the Seattle music community, and can often be found in recording studios and venues. She's a Technical Writer for GoDaddy, incorporating her love for community outreach and information acquisition. If Madison isn't writing or working she's either searching for the best gluten free/dairy free desserts in the city or playing board games. Notably she's the most cantankerous driver on the road, and she's never late for a show.
Related ItemsCapitol Hill Block PartyCHBPChristine MitchellFeatureJake HansonMadison WarnockOdesza
← Previous Story Capitol Hill Block Party 2016: Day One
Next Story → Capitol Hill Block Party: Day Two