By Christine Mitchell on August 2, 2016@Housetornado37 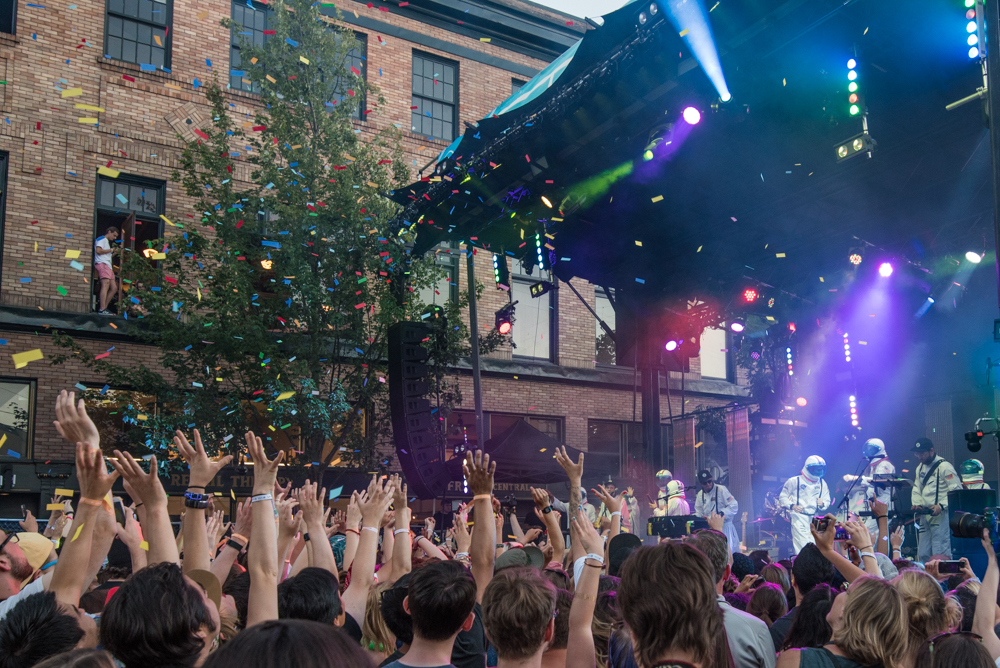 Sunday’s Capitol Hill Block Party boasted a cracking lineup that kept crowds hanging on until late in the evening. The festival wasn’t going out with a whimper. Monday was certainly filled with yawns, headaches, and sore muscles, but the tradeoff was a great, great last day of music.

Maiah Manser led the charge on the Main Stage on Sunday in an unexpected way: with gutteral noise and a lot of inspired repetition. Manser made a spitting sound into her mic and looped it, layering a capella harmonies over it until it became the fully-fleshed animal of a song: Jay Hawkins’ “I Put A Spell On You.” Her version was showstopping: an amazing feat so early in the day. Attendees shared knowing looks with one another, complicit in the amazing experience of Manser’s music. She was a late addition to the festival’s roster, and a worthy one.

Cardiknox was peppy and happy to be back visiting Seattle, their erstwhile home. Vocalist Lonnie Angle sported the latest version of her signature circular sunglasses as she bounced across the stage in her flowered Adidas tracksuit. The band seemed to know everyone in the crowd, and the crowd was happy to receive them.

“Where’s the bathroom at? BELLEVUE! GO BACK TO BELLEVUE!!!” Down in The Cha Cha Lounge, Wolfgang Fuck gave the festival their middle finger, and it was glorious and to the point, their set lasting for a full fifteen minutes of thrash punk heaven. The lead singer had the crap (gently) kicked out of him by the audience, complete with head stomps and multiple beers/drinks poured onto his crotch/chest/face. He bashed his mic repeatedly into a beer can. He broke the mic stand. He was wearing a werewolf mask the whole time. Frankly, it was probably the most honest performance of the festival. Plus they made this poster, which is awesome.

Over at Neumos, The Spider Ferns showcased growth in the percussion department as vocalist Kelly Fleek skillfully utilized a drum pad. The result was added dimension to their music in a good way. As always, the duo’s set was complemented by Fleek’s art installations and trippy visual projections on a screen.

Ritzy Bryan’s guitar faces are vacantly, terrifyingly wonderful, her pale blue eyes channeling Kristin Hersh in her younger days, but paired with boot-stomping posturing. The Joy Formidable wowed the crowd with a crushing set, but STRFKR won everyone over with astronauts, confetti blasters, and inflatable dinosaurs and flamingos. It seems that STRFKR brings the party with them, sort of like the guy who brings steaks to the barbecue: in it to win it. And they did, boy howdy. The street was packed with dancing folks decked out in streamers.

Over on the Vera Stage, The Cave Singers set forth on an impassioned performance showcasing their folkcore sensibilities. Peter Quirk closed his eyes as his vocal poured forth over the crowd and guitarist Derek Fudesco rocked back and forth on his seat as he cradled his guitar. Those present drank it in.

CHVRCHES closed out the main stage in their typically ethereal way. Lauren Mayberry’s elfin angel persona was complemented with a frothy white skirt and thick-soled combat boots. Her voice harks back to that of Elizabeth Frazer of Cocteau Twins, and brings a sense of the magical to the band’s songs. Her stage presence is magnetic; the other band members barely seem to exist when she is front and center, exaggeratedly wrestling with her mic cord. Everyone present was infatuated.

CHVRCHES was a heavenly way to end CHBP. It is a festival in flux by simple virtue of its location, yet it remains as strong as ever. Capitol Hill Block Party definitely brought the neighborhood’s layers of culture clashing together in a way that they usually don’t. It will be interesting to track its progress as it enters its third decade.

Christine Mitchell has been poring over album liner notes pretty much since she acquired the skill of reading, and figured out the basic structure of rock songs at an early age. Whether it’s the needle popping into the first groove of the record, the beeps that signal the beginning (or end) of a cassette tape, or digital numbers ticking off the seconds from zero, music brings Christine happiness, ponderous thought, opportunities for almost scientific study, and sometimes a few tears. When she started attending live shows two decades ago, a whole new piece of the puzzle clicked in and she has been hooked ever since.
Related ItemsBenjamin Francis LeftwichCapitol Hill Block PartyCardiknoxCHBPChristine MitchellchvrchesClams CasinoDave BFeatureJake HansonLaura GibsonMaiah ManserPhoebe RyanSassyblackSTRFKRThe Cave SingersThe Joy FormidableThe Spider FernsWolfgang Fuck
← Previous Story Otep Brings “Equal Rights, Equal Lefts” Tour to Studio 7
Next Story → Rob Zombie & Korn: Return of The Dreads Tour in Seattle