Ten Reasons You Should Support Thunderpussy

By Christine Mitchell on August 10, 2016@Housetornado37 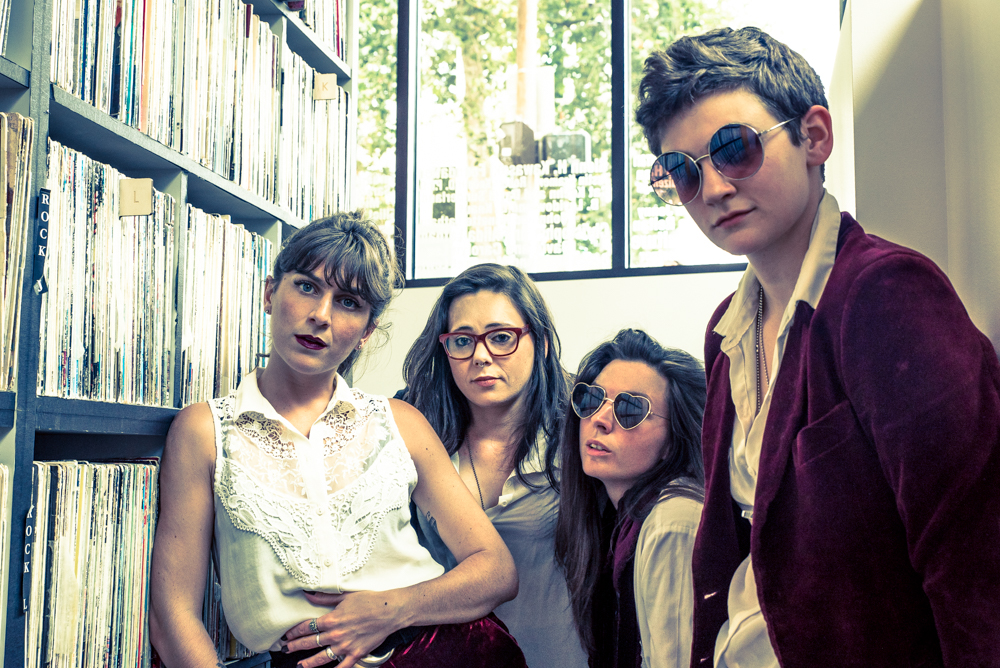 Thunderpussy will be recording their debut album this fall, and they need our help to “git ‘r’ done.” The band is throwing a swank champagne and appy party at The Cloud Room this coming Saturday as a fundraiser, and the proceeds from every ticket go straight toward Thunderpussy’s session down in Ashland, Oregon with the legendary producer Sylvia Massey (Tool, Johnny Cash, Red Hot Chili Peppers). Can’t make it on Saturday? Consider donating to the cause.

In preparation for Saturday’s show and in admiration of one of Seattle’s best-loved live bands, we present ten reasons why you should support Thunderpussy.

Reason #10: This photo is prime evidence that rock ‘n’ roll steams from the very pores of Thunderpussy. Just put them in a room together, and you’ll see. They bake a perfect rock pie EVERY. SINGLE. TIME. 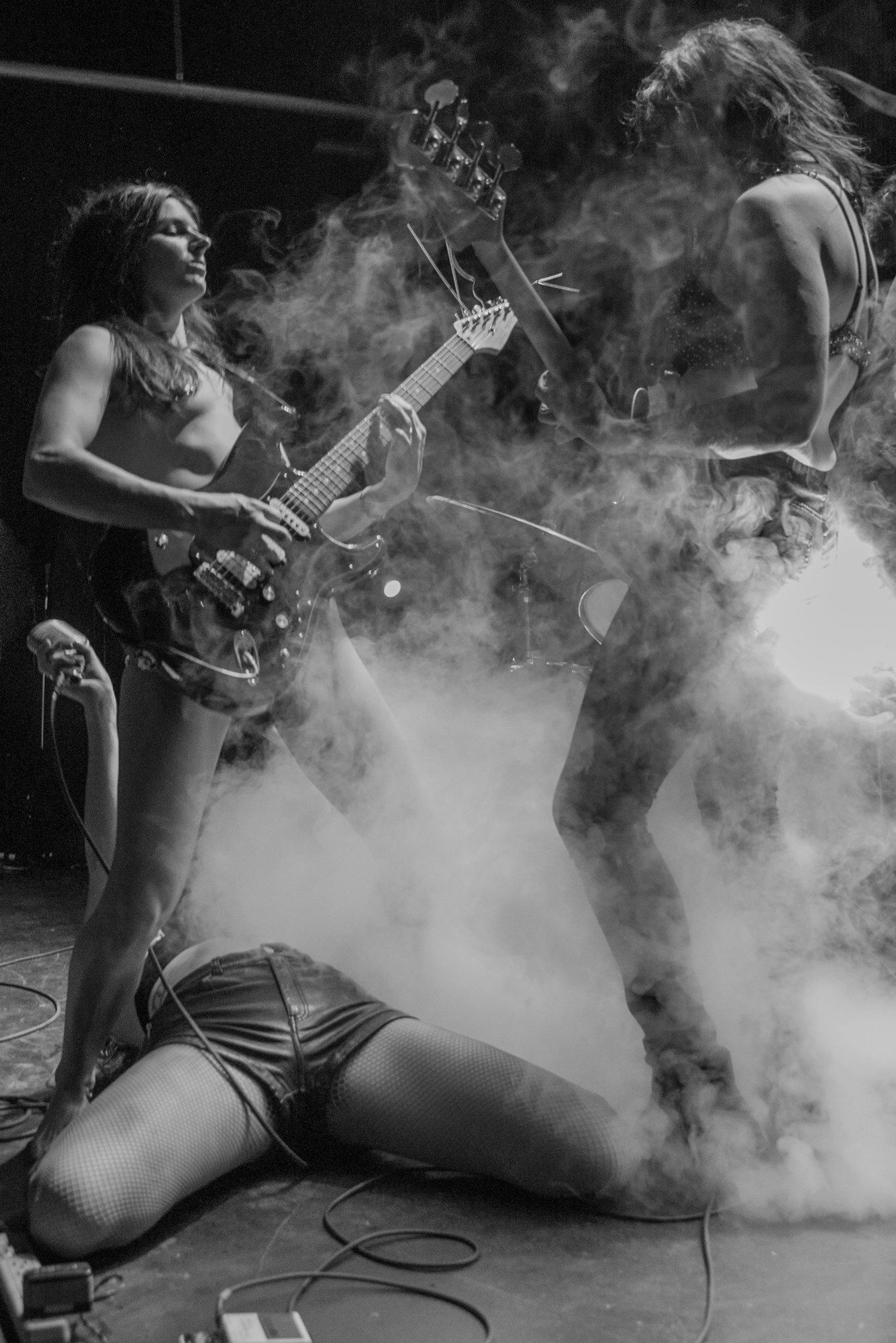 Reason #9: Thunderpussy has played and slayed at music festivals all across the PNW, from Treefort and Macefield to SASQUATCH! and Capitol Hill Block Party (the last two for the past two years running). The last festival standing is Bumbershoot, and they’ve got their sights set on that one come Labor Day Weekend right before they start recording. All this and no album yet. Let us remedy that.

Reason #8: They DO have an awesome music video for “Welcome to the Disco,” however. If you’ve been living in a cave, this might convince you to give away all of your dollars to the band:

Reason #7: The PussyFoot. Thunderpussy’s dancers add an even bigger exclamation point to certain tracks when performed live. This punctuation is part of what sets Thunderpussy shows apart, especially when paired with projections of waving ceramic Bowie cats. A quick genuflection to these two (and maybe a high kick): 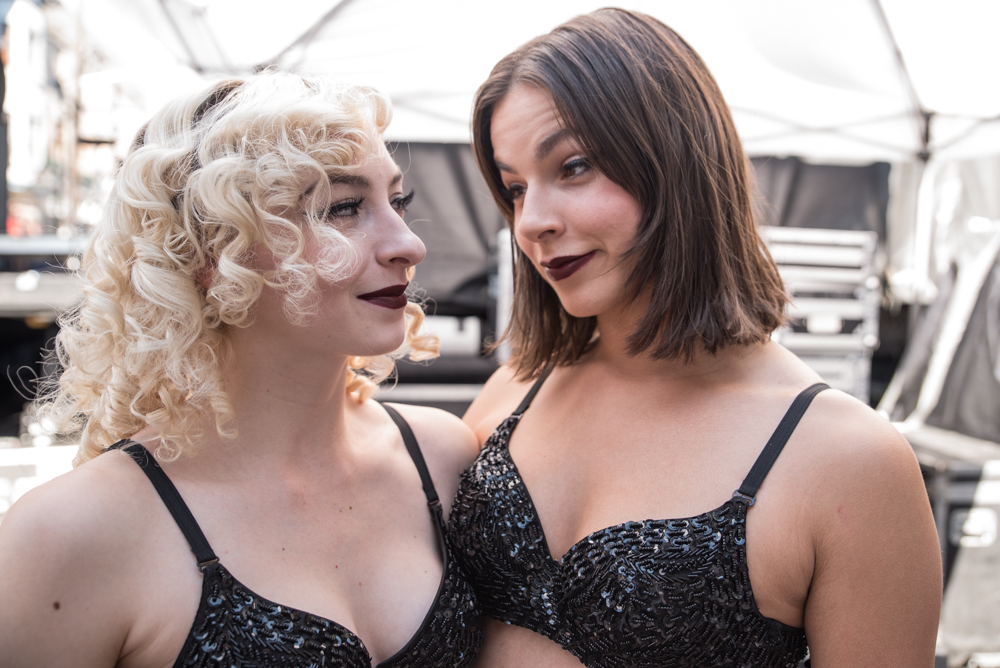 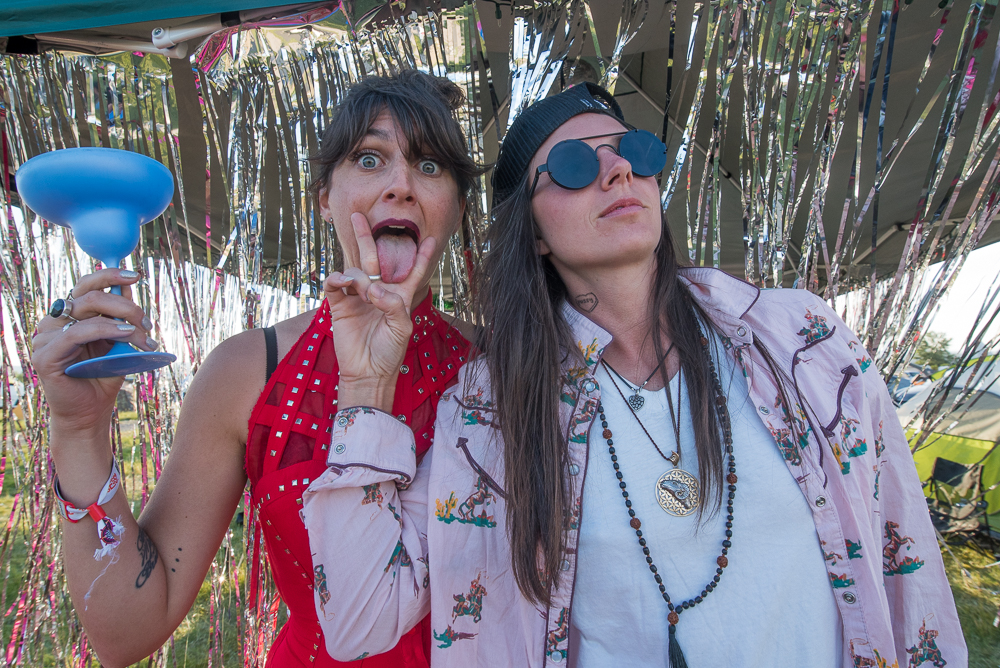 Reason #5: Ruby Dunphy brings so much to the Thunderpussy table. She’s got jazz training, and she adds an unbelievable amount of zing from behind that drum kit. Her drumming and smiles have added a great new dimension to the band in the past few months. 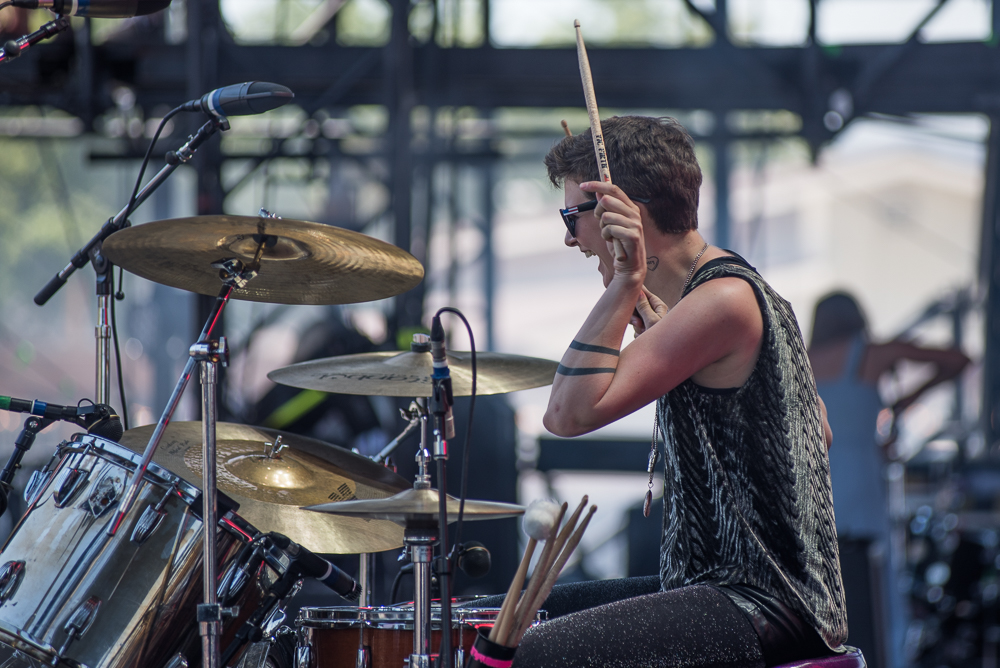 Reason #4: Whitney Petty is hilarious. She can also be super serious. She is serious about rock ‘n’ roll and making her music the best it can be. She knows rock history. She seems to be a bit rock scholarly. But hush. When she gets on stage she’s strutting like Eddie Van Halen while dressed like Diamond Dave. Whitney plays her guitar behind her back now, you know. She literally emanates rock on stage. Proof: 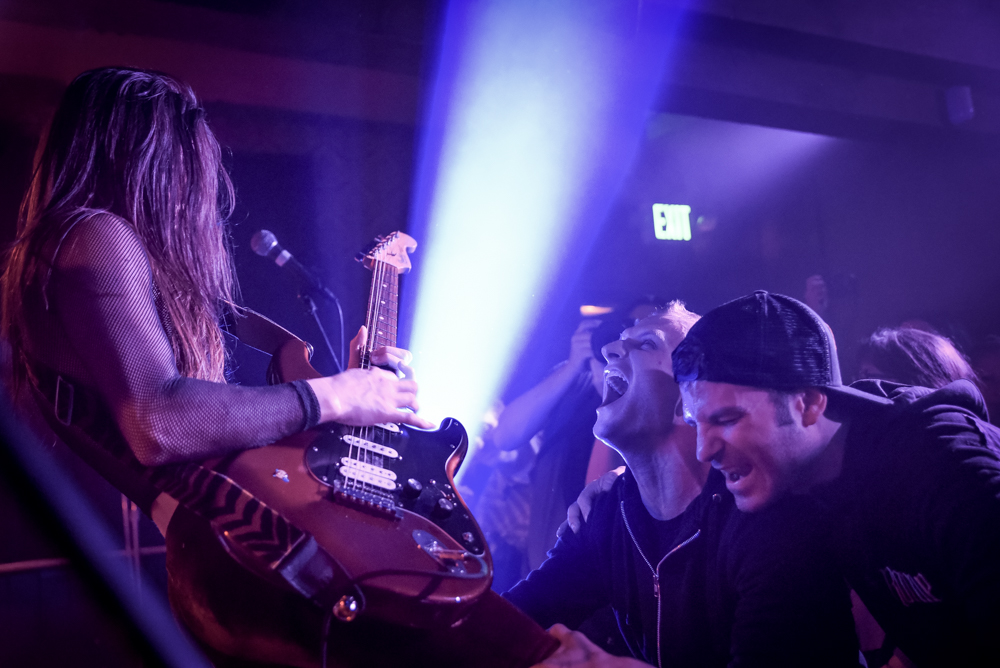 Reason #3: Leah Julius plays bass in Thunderpussy. She also plays drums in Sundries. She also plays in Cumulus and sometimes in Ruler. Leah Julius might be a little crazed. Just joking, she’s really a RAWK GENIUS and seriously, help this girl out. She might be addicted to making records. You should support her habit though, because she’s really, really good. She is also best at wearing sequin-studded bras. And kicking political ass. 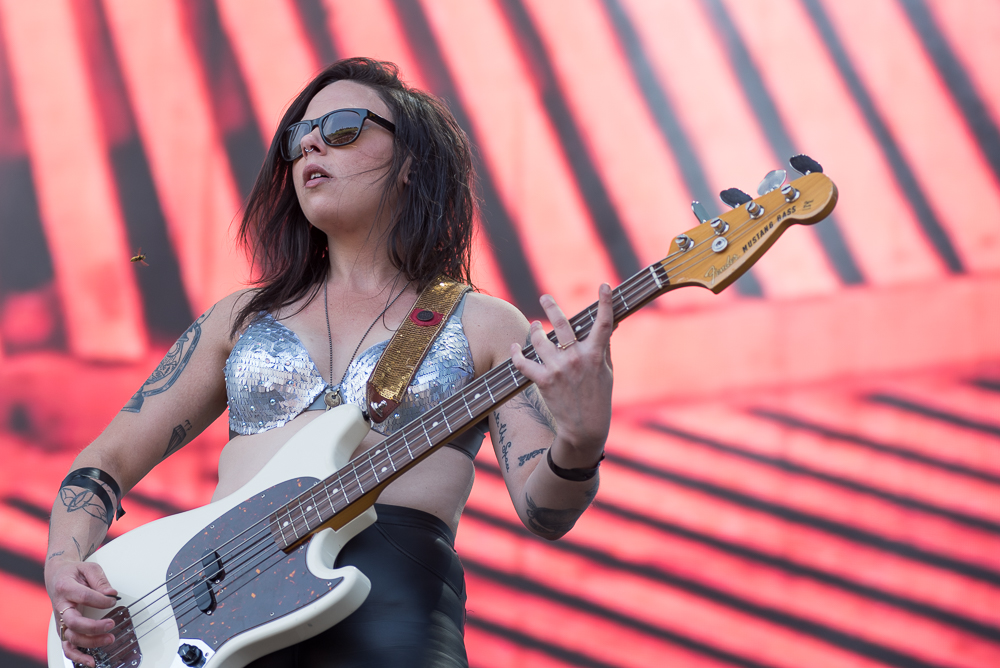 Reason #2: Molly Sides is ALL OF THE THINGS. If it were just her incredibly depthful voice, that would probably make the whole deal, and in the car, it’s the distillation of her. But the words she sings come from her, whether they’re sly double entendres or whip-smart societal observations – and they’re great, too. And then there’s the dancing – and it’s not just great, it’s incredible. It’s singular to have a frontperson of a rock band who is such an accomplished dancer. We’re so lucky, Seattle. 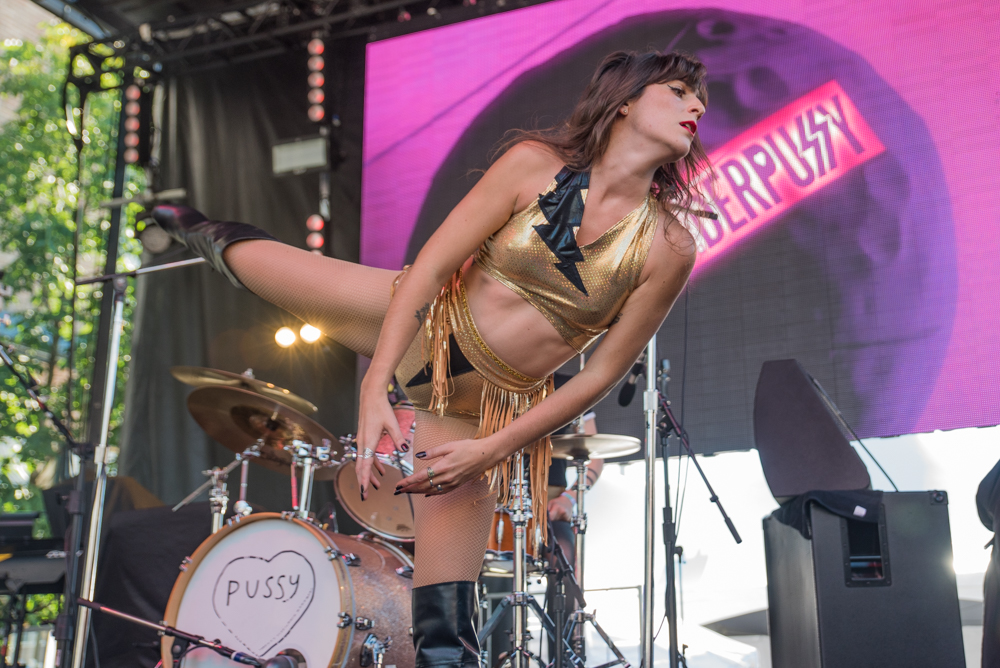 Reason #1: Thunderpussy has given us so much as a band over the past two years, starting with a strong rock foundation and solidifying that with an unforgettable live presence. By helping them, we’re helping ourselves as well. Anyone who has seen this band would love on a vinyl slab with their sound all over it, or at least slobber all over their iDevice as Thunderpussy pounds into their earholes. And that means all of YOU. So let’s pull together, ladies and gents, and pussy up.

An Evening of Philanthropussy with Thunderpussy
Saturday, August 13th at 7PM at The Cloud Room on Capitol Hill
Tickets start at $100 and include various goodies at varying donation levels 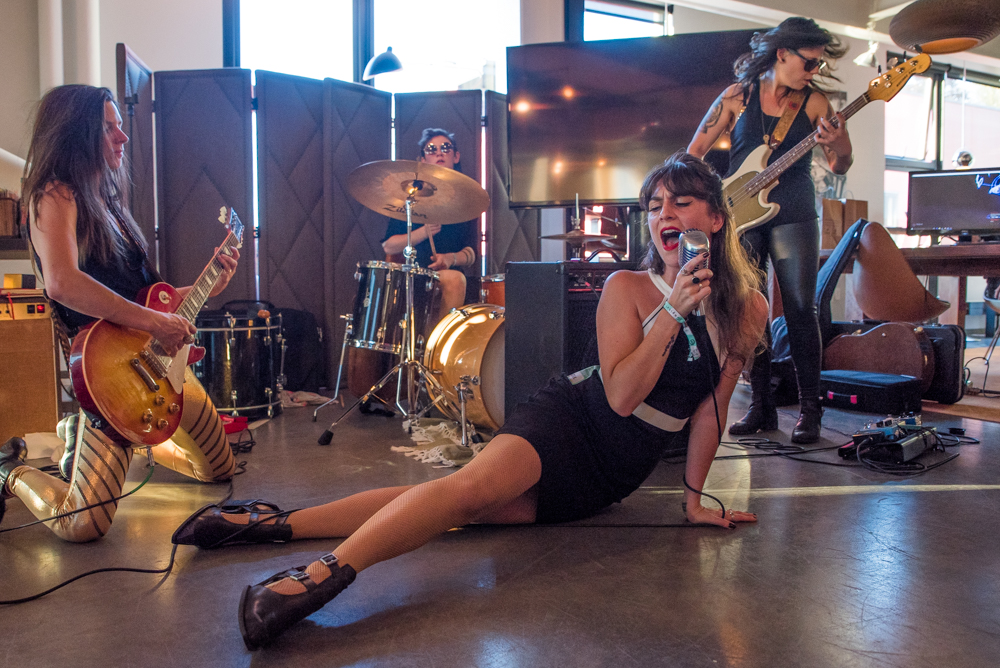 Thunderpussy at The Cloud Room (Photo by Christine Mitchell)

Christine Mitchell has been poring over album liner notes pretty much since she acquired the skill of reading, and figured out the basic structure of rock songs at an early age. Whether it’s the needle popping into the first groove of the record, the beeps that signal the beginning (or end) of a cassette tape, or digital numbers ticking off the seconds from zero, music brings Christine happiness, ponderous thought, opportunities for almost scientific study, and sometimes a few tears. When she started attending live shows two decades ago, a whole new piece of the puzzle clicked in and she has been hooked ever since.
Related ItemsChristine MitchellFeatureLeah JuliusMolly SidesRuby DunphySylvia MasseyThunderpussyWhitney Petty
← Previous Story Tess Henley Shines at Chateau Ste. Michelle
Next Story → Guns N Roses ROCKS Seattle