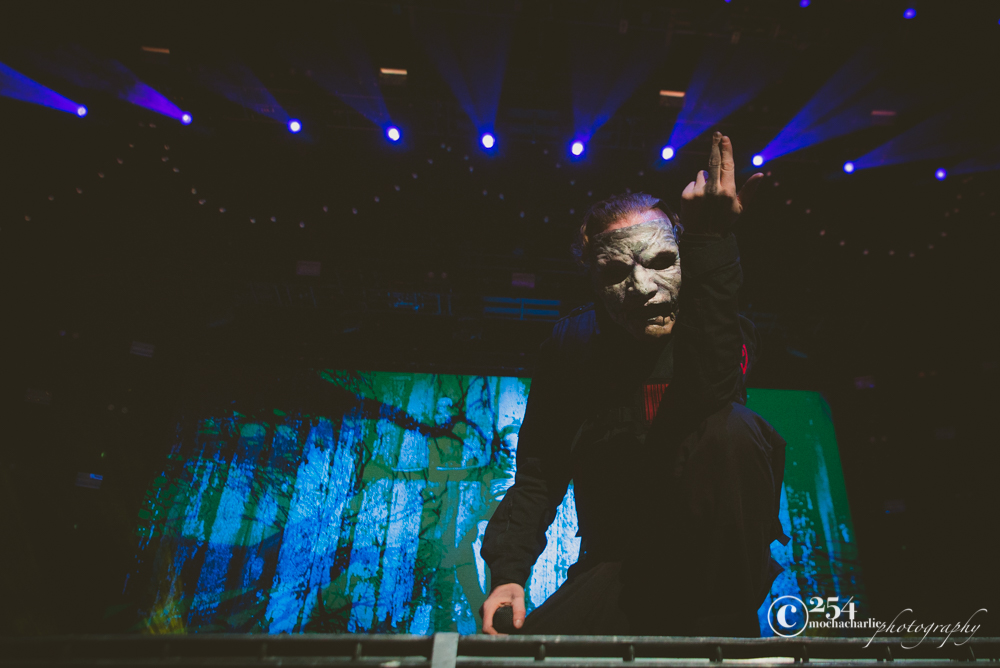 Amidst the horrific news that Slipknot‘s lead singer, Corey Taylor, had broken his neck and would undergo “unplanned spinal surgery” only a few months ago, the band was forced to postpone some shows on their North American Summer Tour. One of those dates would fall on the White River Amphitheater show at the beginning of June. To fans’ delight, the date was rescheduled for last Thursday night. Marilyn Manson and Of Mice And Men rounded out the lineup for the show at the Auburn venue.

Slipknot included songs off their self-titled album from 1999 up to their recent release, .5: The Gray Chapter. Fans may have thought Taylor wouldn’t include songs such as, “Eyeless” & “Distasterpiece”, as they can be a bit lyrically daunting, but he sang them with the same passion and angst fans know and love. Catering to fans old and new, a Slipknot stage show would not be complete without masks, light shows, spinning drums, and a huge LED screen running haunting imagery throughout the show.

Taylor, who had donned a neck/back brace, may not have been able to jump around as much as he had done previous to his injury. But other than that, he held nothing back. Between songs he shouted words of encouragement and gratitude that fans had held the band to their word when it came to finishing the tour. With a few more rescheduled dates ahead, Slipknot’s US tour won’t wrap up until October. The band then has international dates that will keep them busy until well into November.

(Please note: Of Mice And Men did not allow photographers.)

Mocha Charlie is an amazing photographer who has a real passion for music. She covers and shoots several shows per month in and around the region. She a brilliant photo journalist but most importantly, she is also a mother who does her best to balance out her life and live it to the fullest. Mocha Charlie uses her passion and talent to support the community, her friends and family any way that she can.
Related ItemsFeatureMarilyn MansonMocha CharlieOf Mice And MenSlipknotWhite River Amphitheater
← Previous Story Lions Ambition Strips It Down
Next Story → Periphery Brings Sonic Unrest Tour to the Showbox