Four Guys In Jeans With Guitars 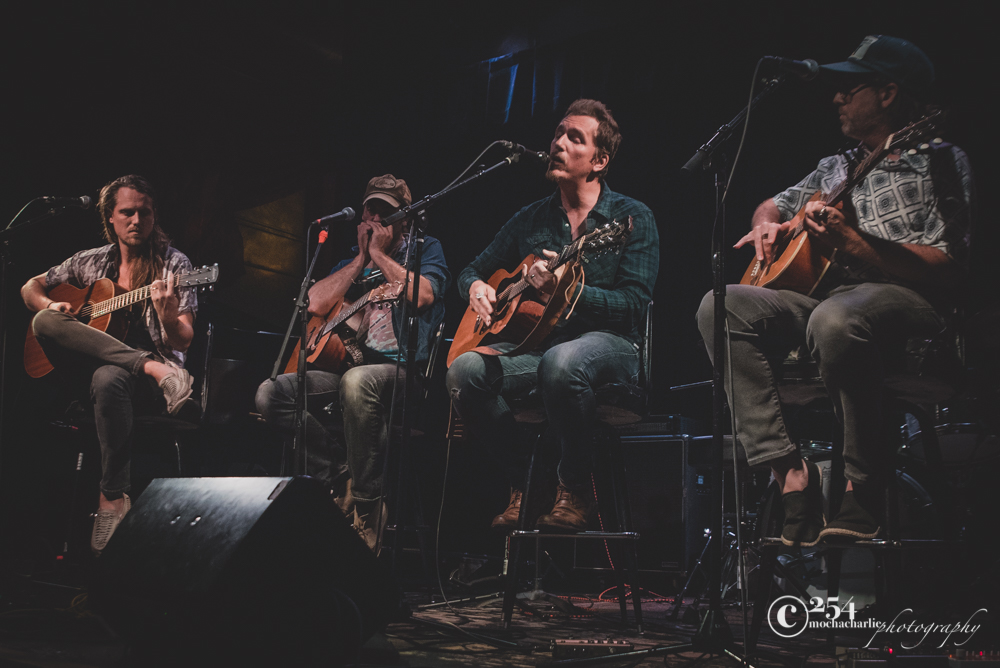 The Royal Room in Columbia City may not be new to hosting music, but what transpired last night was a new experience for those who were there to see it.

Shane Alexander (LA based singer/songwriter) is out on a solo mini-tour here in the Northwest, (before hitting a few East coast spots and a European tour in the fall). He’s promoting his sixth studio album, Bliss. He’s grown a large following of contemporary classic folk rock fans through thousands of plays on music streaming services, and multiple global tours along with multiple television song placements over the years. He was to be one of three acts to perform last night, but with last minute (unforeseen) changes to the line-up, his set became part of an “in-the-round” with locals Mikey & Matty, and Eastern Washington’s Navid Eliot (one half of Planes on Paper), and it was fabulous.

Navid and Mike & Matty have performed together before, so they were all familiar with each other’s music. Navid and Shane had toured together before a few years back, so they were also familiar with each other’s music styles. Last night was the first time Shane had met Mike & Matty, but the way that all four performed on stage, it was as if all four of them were all old friends, and had been playing together for years. Each took turns at the mics, performing six of their own original songs, while the others sat and strummed along, sang and hummed backup vocals, played harmonica, tapped their feet to the beats, and made jokes with each other throughout the night. Seattle musician, Seth David Warren was invited to join in on the fun, and came up on stage to lend some stellar on-the-spot violin sounds to the mix.

The room’s high ceilings were optimal for the acoustics. While sitting together on stage, the four “argued” about who was playing in the “best” key, how great Ben Affleck was as Batman, and how many stuffed animals Navid likes to play with on stage, (there was never a definitive answer to that one). Shane played songs from his catalogue, including his first single, “I Would Die Alone” from his new album. The song has been described as having both a “pitch dark” and a “murdery vibe.” He jokingly added, “If Johnny Cash were alive, he’d probably sing it better.” The addition of Warren’s violin accompaniment on stage set those tones perfectly. Matty took to the grand piano for his and Mikey’s last tune, and Navid played his last song in the key of G, which they all decided was “the best key to end the night with.”

Mocha Charlie is an amazing photographer who has a real passion for music. She covers and shoots several shows per month in and around the region. She a brilliant photo journalist but most importantly, she is also a mother who does her best to balance out her life and live it to the fullest. Mocha Charlie uses her passion and talent to support the community, her friends and family any way that she can.
Related ItemsalexanderColumbia City TheaterFeatureMikey & MattyMocha CharlieNavid EliotPlanes on PaperReviewseth david warrenshaneThe Royal Room
← Previous Story Periphery Brings Sonic Unrest Tour to the Showbox
Next Story → Bob Schneider Gets Down At The Triple Door