By Katrina Charles on August 25, 2016@Katrina_Charles 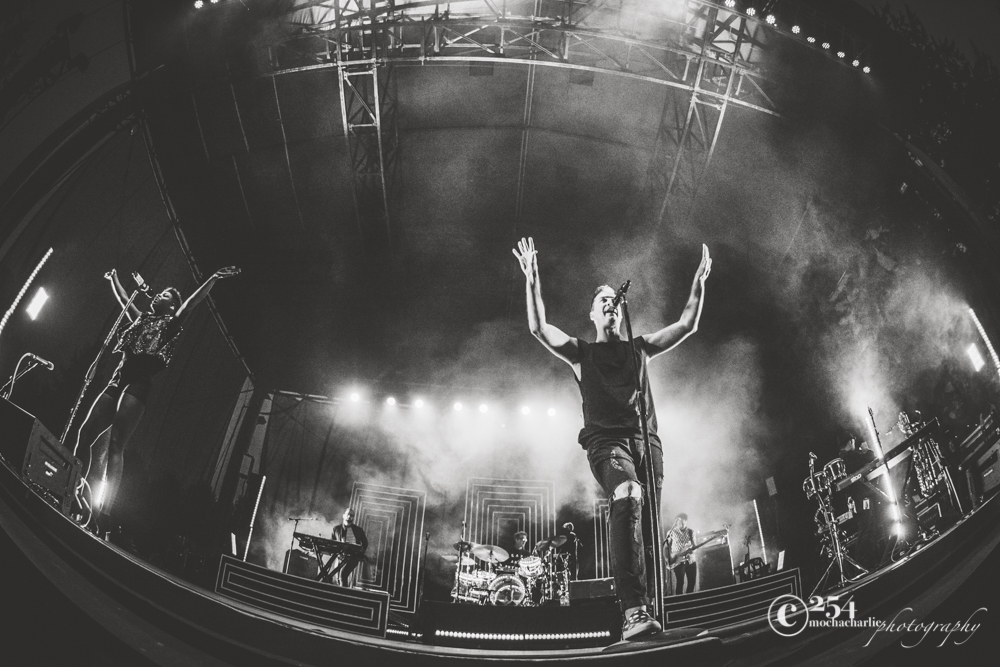 It started out as a hot, muggy evening at Marymoor Park. The grassy green hills of the amphitheater were bustling with concert-goers setting up lawn chairs and blankets, ready for an evening of dance-worthy soul &  electro-pop tunes. The dance floor was set and, though it was empty as the evening began, it promised to be the perfect scene for a party when the sun went down.

Right at 6:45pm, opening band Phases took the stage. The Los Angeles-based quartet’s music is driven by groovy bass and synth riffs, reminiscent at times of 70s pop with rhythmically placed vocals and punched-up group melodies. Lead vocalist Z Burg brings a slight Jenny Lewis vibe to the stage with laid-back, striking vocals. Her free-flowing (and interactive) stage presence certainly set her apart as an incredibly unique performer who is as strong a musician as she is fun to watch. Even a slight malfunction with their microphones at the beginning of their set didn’t “phase” them, and the band finished strong with songs off of their album For Life.

Hometown heroes Pickwick were next to take the stage. A long-time Northwest favorite, Pickwick has been evolving over the years from a folk band, to an old-fashioned soul/rock outfit, and now to a brand-new blend of soul, rock, and just a dash of electronic pop. Lead vocalist Galen Disston’s voice ranges from strong n’ raspy to perhaps the smoothest falsetto you’ve ever heard. Not only are his high-notes silky smooth, they are peppered throughout the songs in all the right places – accentuating their songs but never overpowering their wildly on-point instrumentation. Playing old favorites such as “Hacienda Motel” as well as new, not-yet-released tracks that showcased their new sound, they closed on the catchy rocker “Window Sill” off of their last release Can’t Talk Medicine. It’s worth noting that guitarist Michael Parker recently broke both of his ankles and still showed up and rocked it, which is just another testament to how awesome this group truly is (but someone, please, get that man a wheelchair.) Keep an eye out for new music from Pickwick in the (hopefully) near future.

After the crowd was warmed up by the two amazing openers (and the weather cooled down enough to draw people to the dance floor), Fitz & The Tantrums took the stage. Having just released their self-titled third studio album, their show was full of new and old hits as well as the spectacle you’d expect from this lively powerhouse of a band. Lead vocalists Michael Fitzpatrick and Noelle Scaggs have incredible on-stage chemistry that seems to only grow stronger over time; they play off each other effortlessly and harmonize with ease, accentuating and amplifying each other’s electric personalities. Bright neon lights set the backdrop for the show, playing with the fog and flashing colors to indicate the album a particular song was from (a pretty cool trick). Fitz and Noelle were adamant in thanking the fans, and Fitz made sure to thank the Seattle area for being supportive since their first show at the Crocodile back in 2010 (though he did say it was 8 or 9 years ago, but we’ll give it to him). They opened the set with the song “Get Right Back” off of their new album and intertwined hits such as “Don’t Gotta Work It Out,” “MoneyGrabber,” and “Fool’s Gold” with newer hits such as “Handclap” and “Complicated.” The performance for, let’s say, “sensual” song “Complicated” was a sassily risqué back-and-forth between Fitz and Noelle that showcased their awesome chemistry. After a quick fake “we’re done here” exit, the band returned to the stage to play  “Handclap,” which the crowd happily clapped along to, “6am,” and finally, “The Walker”.

As the orange moon rose over the horizon, people packed up their coolers, folded up their chairs and blankets, and shuffled to the parking lot where they repeatedly pushed the “lock” button on their keychain hoping their car would beep at them in the darkness. In their heads, the rhythms of soulful electro-pop rang continued to play. It was an excellent evening at Marymoor Park.