By Kriston McConnell on August 31, 2016@Kristonisms 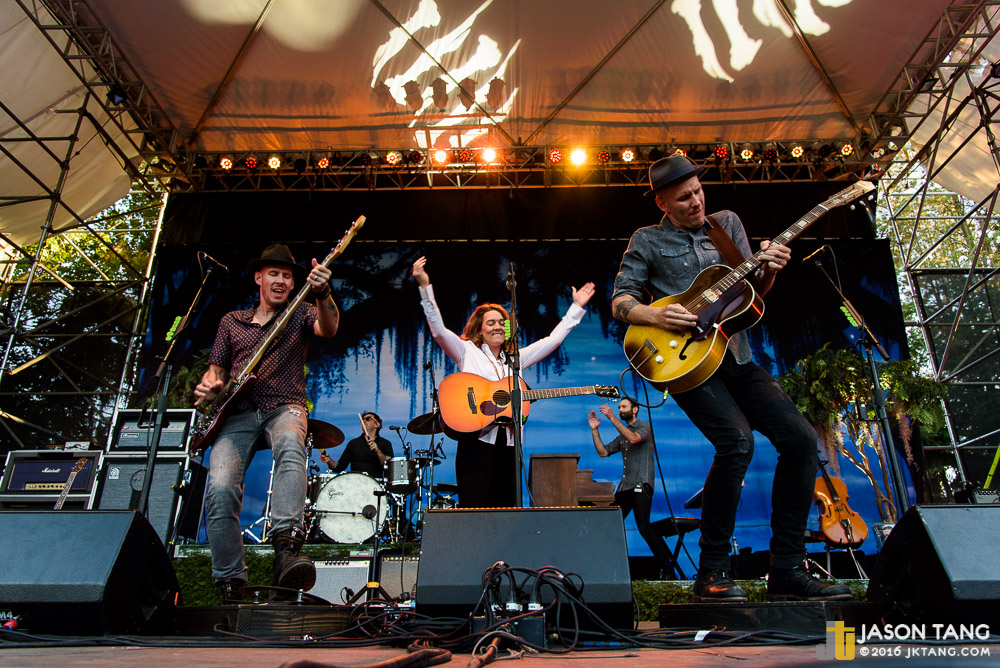 The Woodland Park Zoo’s annual concert series, ZooTunes, is a long running tradition of music and family fun. ZooTunes is a multi-day concert series that features different musicians each day. In its thirty-three year history, the concert series has brought musicians from all over the country into the heart of the Pacific Northwest. One artist who has become a regular of the series is Seattle native Brandi Carlile. Carlile and her two partners in crime, twins Phil and Tim Hanseroth, have made multiple appearances over the years, and they draw effortlessly large crowds each time. For the 2016 ZooTunes, the trio were scheduled for two back to back performances, and SMI was fortunate enough to attend both. The first was August 23.

The opening act was the Alabama-based country duo The Secret Sisters, made up of sisters Lydia and Laura Rogers. They started off with some jokes to loosen up the crowd, then jumped right into their performance. It was just the two of them and an acoustic guitar on stage, but that was more than enough to fill the park with rich sound. They have their harmonies down to a science, and every note performed was an enjoyable experience.

During their performance, the sisters paused to express their excitement for their upcoming third album. They let fans know that the album was produced by Carlile and the Hanseroth twins over at Bear Creek, which is a studio right outside of Seattle. Aside from a couple new tracks from their upcoming album, the sisters played some classic hits, as well as a cover of the well-known country hit sung by Eddy Arnold, “Make The World Go Away.” One of the best songs of their set was one titled “If I Don’t.” It’s a tongue-in-cheek look at a failing relationship where the hook asks “Who is going to love you if I don’t?” The duo wrapped up their set with a song titled “He’s Fine.” One of the sisters said that the song is the last breakup song she wrote before getting married, and joked she hasn’t written another now that she’s no longer has sad things to write about.

The field was packed to the brim with kids and adults of all ages. Strangers and friends were sitting only inches from each other as they squeezed in to be as close to the stage as possible. The atmosphere was a mix of excitement, anticipation and joy. The temperature was finally beginning to cool down as the sun set behind the trees, and the air was buzzing with elated voices.

When it was finally time for Brandi Carlile to hit the stage, a large group of fans rushed to the front of the crowd and many of them ended up standing there for the entire set. They enthusiastically sang, danced and clapped along to Carlile’s 90 minute set. By the end of their performance, there were at least 150 people standing right in front of the stage.

As to be expected, the band performed many of their fan-favorite hits. Some of the best songs were “Raise Hell,” “Hard Way Home” and “The Mother.” Before performing another hit, “The Eye,” the band let fans know that this was the first true three part harmony they wrote together. Carlile jokingly stated “There’s no lead singer in this band, just a hard headed woman who thinks she is.” Before jumping right into “The Story,” Carlile took a moment to sincerely thank their fans and say that this song is one that will always be dedicated to Seattle, and the crowd burst into cheers as soon as the first few notes emanated from the amps.

The highlight of the night was when Carlile pulled up a young audience member from the crowd in the middle of “Keep Your Heart Young” to sing up on stage. She was a 10-year-old-girl named Clementine – and she was an absolute delight. She knew all of the words and sang along with Carlile for over half of the song. It’s surprises like that that makes ZooTunes a unique concert experience every year.

ZooTunes is unlike most of the other concerts that go on in Washington. It might be relatively large (upwards up 4,000 people in attendance), but it feels as intimate as a show with only 100 fans. Brandi Carlile and the Hanseroth twins go to great lengths to make sure each of their performances are special and memorable for the fans. They engage with the audience and crack jokes throughout the set. Fans may go for the music, but it’s the musician’s great personalities that they will remember long after the final note fades away.

Kriston began her writing career as a passionate music fan. She attended dozens of shows, purchased CDs, vinyl and even cassette tapes of artists she barely even heard of. Shortly after joining a band's street team she happened to meet blogger Jacob Tender (now with Alternative Press) who asked her to write for his blog. After a couple of months he joined the staff of Under The Gun Review, and brought her along for the ride. After spending four years as a major contributor to the publication she moved on to be a web content contributor for New Noise Magazine, whose print magazines have a national reach.
Related ItemsBear CreekBrandi CarlileFeatureJason TangKriston McConnellThe Secret SistersWoodland Park ZooZooTunes
← Previous Story Warped Winds Down At White River
Next Story → Brandi Carlile Redux at ZooTunes