By Kriston McConnell on September 1, 2016@Kristonisms 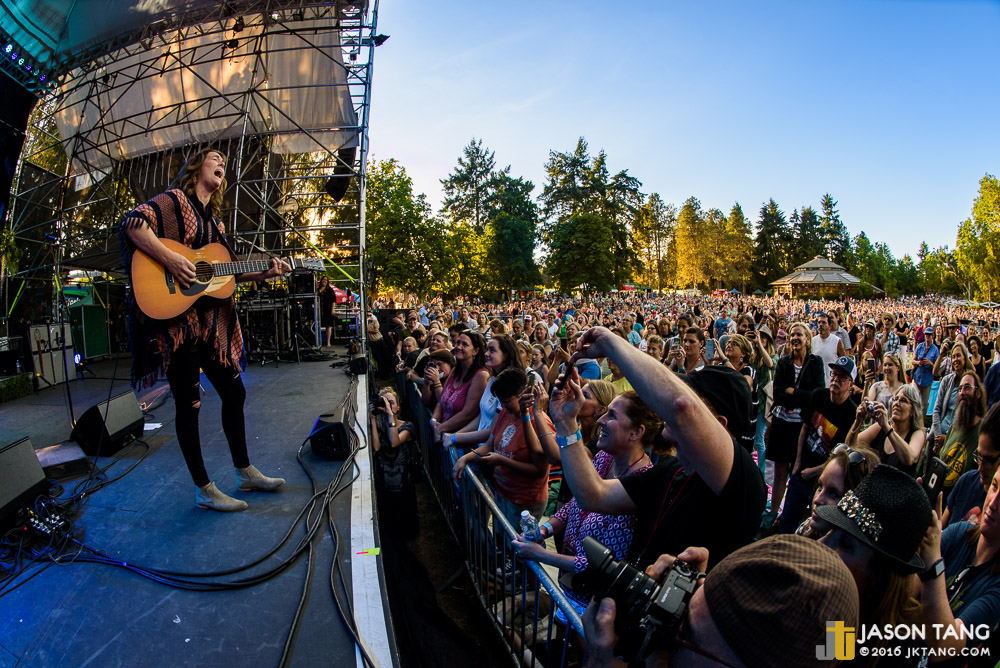 This year’s ZooTunes concert series was a wild success. The cadre of performances featured a number of talented artists including The B-52s, Ziggy Marley, Jeff Beck and of course, Brandi Carlile. She and her band performed the last two dates – which were August 23 and 24 (the first night’s performance can be found here). It might be easy to assume that two shows back to back would sound and look pretty similar, but that would be a false assumption. Both The Secret Sisters and Carlile changed up their sets to freshen them up. Fans who attended both nights experienced two different shows with two entirely different atmospheres.

The Alabama-based duo known as The Secret Sisters opened once again, and were just as delightful as the previous evening. They were funny, cracking jokes throughout the entire set. They also performed covers of multiple classic country songs, one of which was a song they performed at Brandi Carlile’s wedding. The song was “Let It Be Me,” which was originally performed by the Everly Brothers. They also covered an unreleased song by Billy Monroe. They opted to end their set with a song they had not performed the night before, titled “Bad Habit.” This track is taken off their 2014 album, Put Your Needle Down. They had warned the audience that their songs were on the sad side, and this one was no different.

Carlile and gang also made sure to offer a slightly different set than the night before. While they did perform some of the same songs, they included covers of John Denver‘s “Take Me Home, Country Roads” and “Rocky Mountain High.” They also performed a cover of Johnny Cash‘s iconic hit, “Folsom Prison Blues.” Carlile brought her brother, Jay Carlile, out to play the harmonica during this song. The crowd recognized the first new notes right away and exuberantly sang along.

The band performed a song released earlier this year that is not currently on an album. “The Mother” is a tongue in cheek look at being a mother. Before performing the song, Carlile swoons over her daughter and jokingly tells the audience that people only say you don’t know happiness until you have children because they are jealous of your freedom. Roars of laughter erupted from the audience, and the band dived into the song.

When the band left the stage, the entire audience stood up to cheer and chant “Encore!” After a few minutes of this, the band took back to the stage to perform three final songs. Two of the songs they performed were classic hits. The first was “Turpentine,” during which the band split the crowd into thirds and had them sing in three part harmony. The sound of the audience harmonizing with the band was one of the top highlights of the evening. After that, they closed the night out with both Carlile and The Secret Sisters singing “Amazing Grace.” The stage flooded with red, white and blue lights as the three women stood in the center, huddled together, singing in harmony. Everyone in the crowd was up on their feet, gazing silently at the three singing the melody. It was a calm ending to what had been an energetic evening of music.

Brandi Carlile, the Hanseroth twins – Tim (guitar/vox) and Phil (bass/vox), Josh Neumann (piano/cello), and Brian Griffin (drums) are genuinely talented musicians. Their passion shines through every move they make while up on stage. When they aren’t singing, they’re smiling. ZooTunes itself is a a fun and memorable concert to be a part of – having someone like Brandi Carlile up on stage only makes it that much more special for those who attend the performances. When the musicians are enjoying themselves, so does the audience.

Kriston began her writing career as a passionate music fan. She attended dozens of shows, purchased CDs, vinyl and even cassette tapes of artists she barely even heard of. Shortly after joining a band's street team she happened to meet blogger Jacob Tender (now with Alternative Press) who asked her to write for his blog. After a couple of months he joined the staff of Under The Gun Review, and brought her along for the ride. After spending four years as a major contributor to the publication she moved on to be a web content contributor for New Noise Magazine, whose print magazines have a national reach.
Related ItemsBrandi CarlileFeatureJason TangKriston McConnellThe Secret SistersWoodland Park ZooZooTunes
← Previous Story Brandi Carlile Brings Music & Laughter To ZooTunes: Day 1
Next Story → Crystal Desert sears and burns