By Christine Mitchell on September 5, 2016@Housetornado37 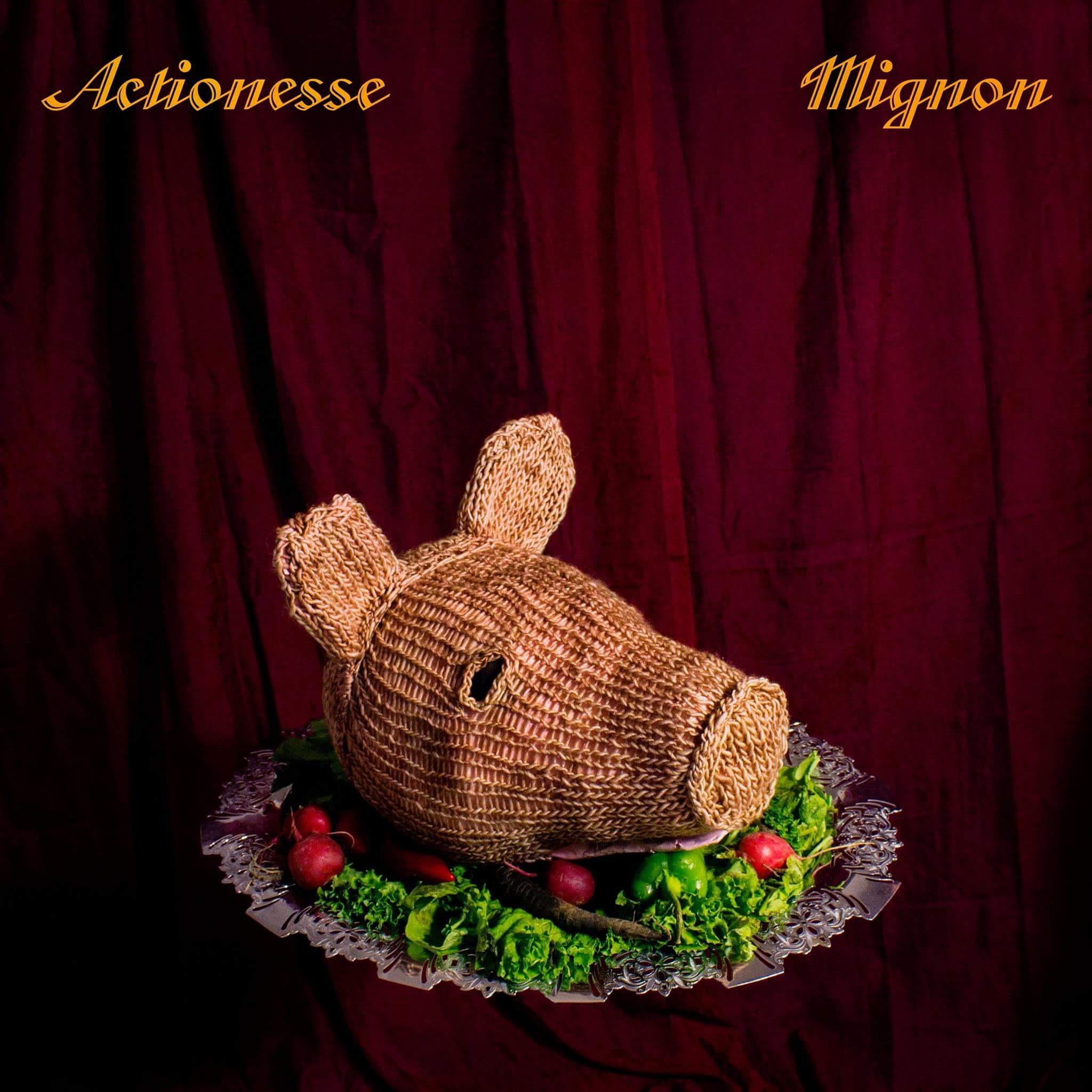 Actionesse is weird. Their sound is hyper, frenetic, and bouncy, and it relies on a psychotic brass section that attacks your ears and assaults your brain. Those horns turn punk into a swirling melee, and you just might find yourself holding your breath during Mignon, Actionesse’s latest EP, so as not to be pulled under completely.

“Mignon” means “delicate and pretty,” neither of which particularly apply to the tracks on this EP. But then, the cover gives us an expertly knitted pig’s head on a platter with tired vegetables, so a tongue in cheek aspect is immediately at play here.

“This Is What My Anxiety Sounds Like” dives straight into the madness that is Actionesse, starting with chugging guitar working in tandem with urgent drumming by Jimmy Colven: a short intro before the rest of the band kicks in. And it IS anxious. Joel Kenworthy’s saxophone morphs the whole thing into a demented, hardcore polka as guitarist/vocalist Ian Reed’s stringy voice surfs over it all. This freakout sets the tone for the rest of the EP.

“The Imposter” features a guitar line that sounds like falling down stairs. From there on it’s all a barreling freight train from vocal to drums, with the only full stops coming from the horns. Breathe.

“Pseudosupervillain” contains layers of swaggering horns and swaggering sarcasm. “You got it, you’re a natural!” sneers Reed before stating “You should be embarrassed!” It’s the sort of song that will incite slam dancing at a live show, and the accompanying video is hammy b-grade hilarity on a tennis court that bears watching. Fake moustaches are funny and fallible.

“Phil’s Lament” is an instrumental, and its centerpiece is lead guitarist Phillip Kaltenbach’s bluesy lead. The song is a bit of a departure from the other tracks, but it’s a welcome one. Kenworthy’s flute and trombone acts as a fine foil to Kaltenbach’s noodling.

Mignon closes with the mega dirge of “Shark Hunting,” and it is an opus worthy of Ahab himself (if the man had been after a shark instead of Moby Dick). The low end truly hums on this track. Paddy Moran’s bass acts as a menacing anchor as the song builds to a crescendo of horns and Reed’s shredded vocal insisting that “What I fear is not my friend.” A flute solo mid-song adds a bit of a breather, but it’s darned evil-sounding flute. Mignon is a masterful next step following Actionesse’s contributions to the Four Corners split released a couple of months ago; indeed, it shows the band’s growth even in such a short period of time. Their sound is darker and the lyrics more aggressively angry. That Actionesse pulls this off with the diverse instrumentation that is their hallmark is impressive.

Actionesse is headlining their EP release show on September 16th at the Highline on Capitol Hill along with Crystal Desert, Dusty, and Filthy FemCorps. Expect a high-energy, horn-fueled performance, and pick up a copy of Mignon. You won’t be sorry. Just remember to breathe.

Christine Mitchell has been poring over album liner notes pretty much since she acquired the skill of reading, and figured out the basic structure of rock songs at an early age. Whether it’s the needle popping into the first groove of the record, the beeps that signal the beginning (or end) of a cassette tape, or digital numbers ticking off the seconds from zero, music brings Christine happiness, ponderous thought, opportunities for almost scientific study, and sometimes a few tears. When she started attending live shows two decades ago, a whole new piece of the puzzle clicked in and she has been hooked ever since.
Related ItemsActionesseChristine MitchellEPFeatureMignonNew Music Review
← Previous Story Loch Lomond play Triple Door Thursday
Next Story → Hatebreed To Perform at Studio 7